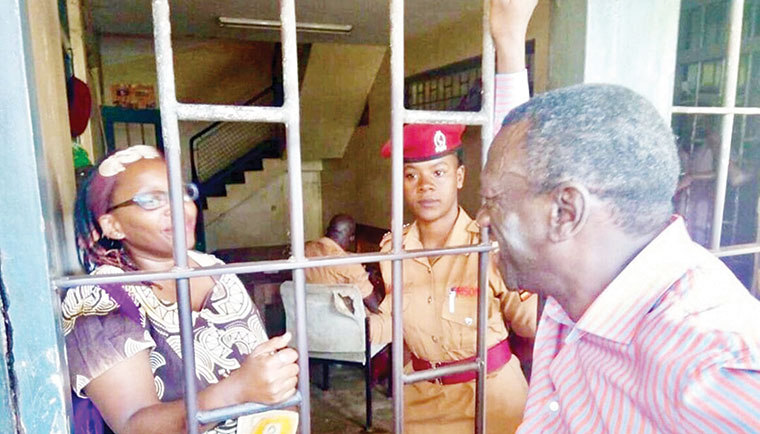 Going to see incarcerated don and controversial political/social critic Dr Stella Nyanzi, there had been a fierce debate.

Would they allow us past the main gate? One of the lawyers that have worked closely with her had hinted that we might not be allowed to see her. She is a high-profile prisoner; therefore, we needed special permission from Uganda Prisons head offices in Kampala, he said.

The lawyers had suffered a similar fate earlier. The other debate arose out of the fact that my colleague had a strained relationship with her, dating back to their days at Makerere Institute of Social Research (MISR), where Nyanzi was a senior researcher.

What would be her mood; would she want to see us or would she throw her easily-used profanities at us?

Well, we were prepared for whatever reaction. She strolled into the room of the deputy officer in charge of the prison with swag, holding in her left hand a small, palm leaf-made mat.

To our surprise, she was excited – very excited – to see us.

“They don’t allow us to hug, but I’m going to defy that provision,” she told my colleague, before embracing him in a way one would embrace their own who has just survived the boat cruise disaster.

“For Batte, I’m not surprised that you have visited; but for you, I’m really surprised,” she said, laying down her mat and settling on it like a Muslim prepping for Salah. Dr Stella Nyanzi has been at Luzira Maximum security prison for now close to two months for writing sexual innuendos about President Museveni and his deceased mother as the president celebrated his 74th birthday.

The president was reportedly incensed for Nyanzi involving his late mother Esteri Kokundeka in political battles. The crust of Nyanzi’s poem was to the effect that Kokundeka (RIP) should have miscarried Museveni, who has become a problem to Ugandans for refusing to relinquish power.

LUZIRA NOT SO SCARY

I was visiting Luzira women wing for the first time. I had been to the men’s side in the Murchison Bay Maximum Security prison, before. When I was going to Murchison Bay, I remember being frisked about five times at different checkpoints. They took away everything from money, phones, pens, books to watches, name it.

Back then, it even took the intervention of the boss for me to keep my contact lenses! Before I could see the inmate, a bio data file was opened for me, complete with my photograph.

I remember removing my shoes, whose carpets were also removed to make sure nothing illegal was being smuggled.

The doors to the cells are the strongest you will ever see anywhere. And once I was free to enter, a prison officer accompanied me, lest I were mistaken for an escaping prisoner and shot by the man in the observation tower. On top of being inside a very strong perimeter wall that runs across the breadth of the prison, there is another wall that looks impossible for anyone to scale it.

In that section is where high-profile prisoners charged with crimes such as murder, terrorism and treason among others, are kept. But in the women’s wing where Nyanzi is currently, although it is also called maximum security prison, it is not as scary.

At the quarter guard, we found three very friendly wardens who asked who we had come to see and then asked for identification. After noting down our particulars and relationship with the prisoner, the prison warden politely asked us to deposit with him our phones and watches, before signalling us to proceed.

About 50m from the quarter guard, there was an unmanned gate; so, we let ourselves in and found two female officers on the other side.

One of them happily repeated the documentation process like at the quarter guard, then told us to wait. “Can’t we go there by ourselves?” I asked, pointing to the gate that closes the chain-link fence around the prison grounds, where several women stand in small groups.

“Haaaa, that is dangerous, we can’t allow you go there alone; they might kill you.” the warden said sheepishly. “Some have been here for more than 10 years, they are thirsty for men.”

Our bout of laughter was interrupted by another officer who told us we could finally see our inmate. We were given 20 minutes to see the fire-spitting don.

“I think you have not seen anything if you have not been to prison,” Nyanzi said. “By the way, I’m serious; you should pray that they imprison you then you can say you have lived a complete life.”

No thank you, doctor.

“I have read in the media people saying that I’m at the beach; that could be exaggerated a bit, but nevertheless I like this place; it has taught me a lot,” Nyanzi, clad in the yellow prison uniform, said.

She then talked about why she believes her arrest was a blessing in disguise, since she had credible intelligence that her life was in danger.

“Several people would come to warn me that I should watch out; that something bad was going to happen to me. Actually, I had started seeing people trailing me. I think I needed this until the threat subsides.”

Nyanzi was arrested on November 2 at Wandegeya police station where she had gone to inform the police about her impending demonstration at Makerere University for its refusal to implement the court orders to reinstate her in her previous position as a research fellow.

She lost the position after her prolonged fight with MISR director Prof Mahmood Mamdani and later the minister of Education, Janet Museveni. She infamously undressed at the institute in protest, launching her new identity as the Makerere don with a ‘rich’ Luganda vocabulary that she liberally used to disarm many.

“It is true that some of these people here are criminals, but there are equally those who are innocent. But all in all many of them are really nice people,” she said.

Nyanzi said she does not do domestic work like cleaning the cells, washing or chopping firewood. She said this after I asked about the indelible ink on her right thumb.

“Yesterday I was in court; so, I got some money and I had to make some transactions. I have a problem with my fingers; I can’t put them in water. So, for the domestic chores, I have to get someone to help me do it and in exchange I pay them some little money which they use to buy things like mandazi or sugar,” Nyanzi said.

If you are to give money to any prisoner, she said, you have to deposit it with the officer in charge.

“Some of these guys have been here for quite long; so, their people have since abandoned them yet life has to continue. This leads to too many cases of stealing as people struggle to survive. They steal everything including the uniform and sanitary pads. She explained that that’s the reason she labelled her uniform with her name, the high-school style.

They use thumb prints, not pens to sign. Unlike the previous times when she was arrested, Nyanzi said this time round she was more prepared.

“I carried a small mattress this time which I sleep on. I had also carried a mosquito net, but together with my mattress cover, they were taken away from me. In their thinking, these can easily be used to commit suicide.” Our conversation was halted midway by officer Achan who said it was time up.

Another officer was called in to escort Nyanzi back to the cells. As she left, with us standing still on the balcony of the single-storied building that houses the officer in charge’s office, we waved like children to a father after dropping them off at boarding school for the first time. “See you, Stella,” my colleague told her. “Thank you for coming,” she called back.

And she disappeared into the sea of yellow uniforms. We left satisfied that my friend had reconciled with his erstwhile enemy and I had my story. Hmm, and the proud Nalongo had not uttered a single word of profanity in the 20 minutes!

appart from showing that you have seen a film , you do not know what Stockholm Syndrome is about.

Check : Dr. Stella Nnyanzi has not developed a relationship or bonded with her kidnapper.

Unlike the (women) bank employees who were taken as hostages by robbers , whom they later fell in love with , Nnyanzi is doing the opposite. She has chosen to stay in jail and bond with "criminals" instead of surrendering to her "abductors".