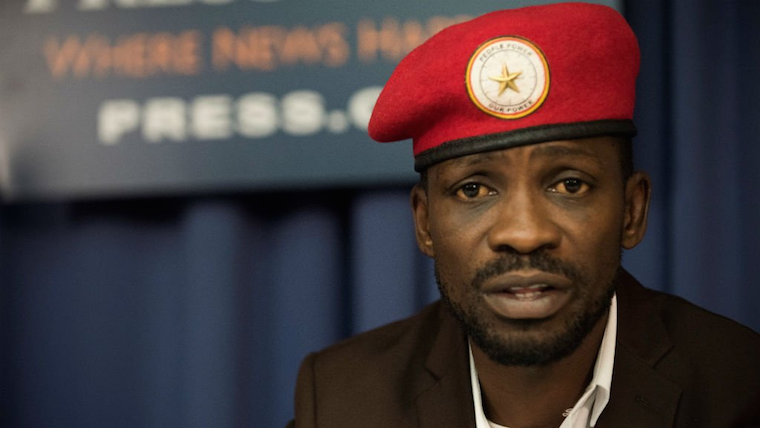 Kyadondo East member of parliament Robert Kyagulanyi had to beat security to elude arrest and return to Kampala from Jinja, where he was blocked by police from performing.
The musician-turned MP also known as Bobi Wine, was yesterday blocked by police from performing at a street jam organized by Queen's Palace bar along Iganga road in Jinja district.

Although posters announcing the event had Bobi Wine's name and portrait, he did not appear on the final list of artists "approved" by the police. One of the organizers of the event, who preferred anonymity, said that police tasked them to remove Bobi Wine from the list of artists before approving their event to take place.

Bobi Wine arrived in Jinja town at around 5pm and traversed the streets of Jinja town which caused a traffic gridlock for about two hours. However, at around 07:30pm, police officers cordoned off City hotel located along Clive road where Bobi Wine had camped ahead of his performance.

Bobi Wine told journalists that he was informed by the organizers while on the way that police had ordered them to put him off the list. Later in the night, Bobi Wine claims police raided the hotel and started arresting members of his entourage.

"After your [police] raid, the wanainchi in Jinja made it possible for us to elude you and any evil plans you harboured. The roadblocks you put on the way to sabotage my travel back were a shameful move. I managed to travel back to Kampala today morning," he said in a post on social media on Sunday.

Bobi Wine, a fierce critic of President Yoweri Museveni's leadership and is currently battling treason charges alongside over 34 others, said police must answer as to why they are consistently infringing on his human rights, including restricting his movement and obstructing his shows.

"I still need answers as to why I am singled out and not allowed to practice my profession while my fellow artists are working! If I have a crime, why do you run away from me when I come to your offices? If I have a case to answer, why don't you summon me and prosecute me as the law requires..." he said.

The raid was hastily condemned by Bobi Wine's London based lawyer, Robert Amsterdam and a number of US congress politicians.

"This is a clear and brazen act of targeted political repression by the Uganda authorities aimed at violating Bobi Wine's human rights," said Amsterdam.
"Once again, Bobi Wine has broken no law, the concert was fully and legally permitted, and the other participating musicians were not targeted."

US congressman Bradley Sherman who met Bobi Wine early this year when he had gone to Washington for medication after being tortured by security in Arua said; "the Ugandan government must commit to the essential principle of freedom of speech."

California Democratic representative Karen Bass tweeted; "reports are coming out that Bobi Wine may be in danger in Uganda. Stifling freedom of speech and expression and arbitrary arrests have no place in a democracy."

Today, there was presence of heavy deployment in Buikwe district where police anticipated Bobi Wine to visit. The deployment beefed with foot patrols is visible in the areas of Lugazi municipality, Ngogwe, Zziba, Najja and Nkokonjeru. According to Sezzibwa regional police spokesperson Hellen Butoto, Bobi Wine did not seek police approval before planning a rally in the area.

"According to our intelligence network, Hon Robert Kyagulanyi Ssentamu is planning to have a rally in Zziba village in Ngogwe sub county, Buikwe district. But it’s so unfortunate that he hasn’t yet gotten permission from the police. In case he’s seen in and around Buikwe he will be arrested." Butoto said.

My Sister Akot,
Museveni is unstoppable and is as ever determined to go down with Uganda as Ugandans are watching.

Blame it on naivety and lack of principle in some of our communities! They will only wake up when Uganda is desecrated and a failed state like Somalia.
Report to administrator
0 #12 Marcello 2018-12-17 16:33
Quoting kabayekka:

My friend Bobi Wine, you cannot keep running and hiding from the military Police that does not want you to make a living.

Bobi's hide-and-seek game reminds me of Ken Lukyamuzi, the man, of Rubaga South.

He used to issue empty threats but the moment police would come he would flee in his Mayuni gardens to hide. The voters realised he was a big joke and voted him out!
Report to administrator
0 #13 Fuller 2018-12-17 22:19
Hang tight Uganda (and Uganda-lovers).

There is a method to Mr. Robert's madness -- or is there?!

The clock is ticking faster...by the hour -- and every Ugandan who is holding on tight to his dream of a free and democratic country will see the dream come true.

The secret: No secret. Everyone just keep playing -- unabatedly -- the part (however small) that is leading to the collapse of the corrupt Ugandan gang of shamelessly-corrupt ruler(s).

Sooner than later the rotten regime is history.
Report to administrator
12