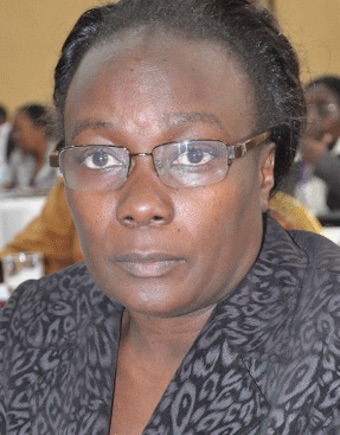 High court judge Elizabeth Kabanda has pulled out of the case in which nine suspects are charged with the kidnap and murder of former Bwendero dairy farm cashier Susan Magara.

The late Magara was kidnapped on February 7, along Kabaka Anjagala road in Mengo on her way to her apartment in Lungujja and held captive for three weeks. Later her body was found in Kitiko village between Kajjansi and Kigo along the Entebbe expressway.

Her kidnappers had demanded for a ransom of $1 million before murdering her even when her family had paid Shs 700m. In the aftermath, police arrested scores of people from Usafi mosque who were later charged before Buganda Road court for murder and kidnapping with intentions of seeking ransom.
They include Mahad Kasalita, Yusuf Lubega, Hussein Wasswa, Muzamiru Ssali, Hajara Nakandi, Abubaker Kyewolwa, Hassan Kato Miiro, Ismail Bukenya, and Musa Abbas Buvumbo.

The suspects were later committed to the High court for trial. Now High court judge Kabanda today pulled out of the matter citing conflict of interest.

Kabanda stated that she had known one of the accused persons, Hajara Nakandi for the last 35 years and she wouldn't be able to provide justice in the case. Kabanda did not divulge details about her relationship with Nakandi. She sent the file back to the High court registrar who re-allocated it to Justice Jane Francis Abodo

Meanwhile lawyer Isaac Semakadde, who is handling this application on behalf of the suspects, has said that a team of medics from African Center for Torture Victims is on standby to examine them once the application is allowed.  This follows reports that the suspects were tortured while under police custody.

Conflict of interest aside, i think the case is also too controversial, the evidence on file is very week too

Sir, I assume that you are a lawyer and that you have access to those case files.

To me that "conflict of interest" seems to be her safest way to spit out a mouthful of matoke that is, otherwise, too hot to swallow.
Report to administrator
0 #3 rwasubutare 2018-12-06 15:56
Who can blame her? To enter ADF case is to invite a hooded-boda-rider with an AK47.

This case should be given to the mob or acquit them. This delay and Patrick's South African delay to extradite already has made we history-readers very suspicious that somebody highly placed has eaten. Only the mob and no other party can give justice to Susan.
Report to administrator
0 #4 WADADA rogers 2018-12-07 08:43
Gwok, when i said conflict of interest aside, i didnt mean it is not reason enough, indeed it is a good reason but am also aware that there lots of sentiments surrounding the case.

May be the judge is aware that the case will fail, may be she knows that the accused persons are being victimised yet the real truth is being hidden.

Many Ugandan are not aware of the reasons that girl was killed. Some members of her family are aware but they cant say. I have said it before and i will say it again that this issue was based on a deal gone bad
Report to administrator
0 #5 gwok 2018-12-08 23:13
Quoting WADADA rogers:

(b) " ... May be the judge is aware that the case will fail, ...." What? Sir, then she should be a prosecutor and not a judge. A judge is expected to be neutral and stick strictly to what the law says.

(c) "... Many Ugandan are not aware of the reasons that girl was killed. ..." Really? (i) We were told that ransom was demanded and some amount was paid. (ii) I am not sure if she was also sexually assaulted. (iii) Further, many such things have happened in and around K'la & Wakiso recently. As such, political motives can not yet be ruled out.
Report to administrator