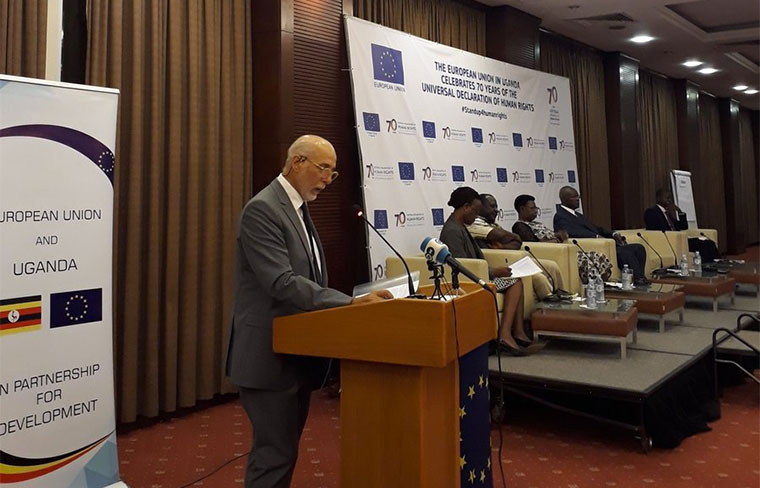 The European Union is not funding potentially subversive activities as has been alleged by the Ugandan government, head of European Union delegation in Uganda, Attilio Pacifici has said. Ambassador Pacifici said such claims have come up from the Ugandan government, questioning the EU support to support to civil society actors in areas of human rights and governance. Speaking at a dialogue on human rights at Kampala Serena hotel, Pacifici said the claims are baseless and unfounded.

"There is a perception of what is done by the civil society - very often seen as supporting something that is destabilising. We’re not, we’re not plotting absolutely anything. In fact very often when these issues are mentioned we ask in what ways do you think we’re supporting subversive activities? We want to know what we’re doing right or what we’re doing wrong." Pacifici said.

He was one of the panelists at a dialogue under the theme "The European Union's contribution to Human Rights in Uganda - Are we doing the right thing?" Other panelists included Chief Justice, Bert Katureebe, former Ethics minister Miria Matembe, Lillian Adriko, CEO Uganda Association of Women Lawyers (FIDA-U) and senior presidential advisor political affairs David Mafabi.

Pacifici said the EU in Uganda supports activities aimed at implementation of the human rights issues as par the ACP-EU Partnership agreement, signed in Cotonou on 23rd June 2000. Uganda is part of the signatories of the agreement running from 2000 to 2020.

Part of the support according to Pacifici, goes to the civil society and the rest goes to government in form of budget support. The EU has been part of the biggest funders to the Justice, Law and Order sector in Uganda.

The comments by the EU diplomats in Uganda come hardly a month after the EU Ambassador to Tanzania, Roeland Van dee Geer was unceremoniously made to leave the country. He was allegedly given an ultimatum to leave following a fallout with the President John Pombe Magufuli's administration.

Van de Geer was known for his "frankness" and was openly critical about the human rights situation in Tanzania. Now Conze during the discussion said has reflected on the Tanzania situation and wondered whether is high time that EU and its ambassadors toned down on their human rights demands and questions. It appears like there has been a behind the scenes exchange between the government and EU following the Arua violence in which Kyadondo East MP Robert Kyagulanyi's driver Yasin Kawuma was gunned down and several MPs and locals arrested.

Presidential advisor Mafabi stayed away from answering to question raised by the two diplomats apart from saying that Uganda is still evolving in terms of human rights observance.

"The Ugandan and the African people, I agree entirely, it’s our right and its our duty, our partners and our friends can give us a helping hand but no country in the world owes us a living….we appreciate friends, we appreciate partnerships, but ultimately, it's our duty, it's our responsibility, we or the Ugandan or African community to sort out these issues." said Mafabi.

Former Mbarara Woman MP and state minister for Ethics, Miria Matembe said the civil society in Uganda had been accused of being agents of foreign interests because they are speaking against bad governance, militarism and corruption.

"I used to be in civil society and we used to work in complementarity with government. Down with the road, because we questioned wrong, we became wrong…That is why they say we’re foreign agents. But if the government is foreign funded, shouldn’t we also be foreign funded? Is government also an agent of foreign whatever. All this nonsense must stop, we should speak the truth and say the crave for power, to stay in power forever is the cause of all theses things that have happened." said Matembe.

EU is waiting for Ugandans to bring down the tribalistic system & UNITE against Museveni - EU does not tolerate tribalism-nepotism-extremism-rasism!

EU tribalistic political parties had to change their stand to become Nationalists defending their countries & cultures!

Once Ugandans bring down the tribalistic system & have a common opposition leader, EU will help! More so, this would be the best way for EU to laugh at powerless UK locked in power struggle, instead of UNITING to put their nation on feet FIRST!

EU even said UK can go for second Brexit referendom, as it sees how lost British are without Brussels leadership!

But of course that is the way it should be. People in the village survive on arid existence, whereas the people in cities like the 'Mafabis live on hand outs and manna from the EU and Co; the butter, jam, bread, cars, mobile phones, suits, medicine and treatment abroad'; who is he kidding?

Whoever this 'URN' is, they should learn how to write in clear English.

Does this newspaper lack sub editors who can read properly? How can you let such a poor article through?

In other words, instead of looking at the objective gravity of the problem of our ravenous and ungrateful govt, biting the hands that feeds it; diversionary Treva goes for trivia (English langauage) and irrelevance.
Report to administrator
0 #14 Akot 2018-12-05 20:10
Lakwena, agreed, but,

Don't forget; EU member states are democracies put in place by the people, leaders are elected/reelected/renewed every 5 years, tribalism-racism-sectarianism-nepotism... are not tolerated!

The tribalistic system maintained by Ugandans goes against EU principles, but EU needs Uganda, yet cannot bring change of governance for Ugandans!

See, not 1 EU member state came out to help French nor their president with current uprising against yet another tax: so how can EU official join Ugandans who, by the way, accept the tribalistic system that goes against EU principles?

But EU & the rest of the world need Uganda riches & will go on doing business with Museveni: why should Ugandans go along with Museveni, yet blame outsiders for doing so?

You know in Europe, it's tax payers & the rich who want to migrate to be releived of heavy taxation!

When French Macron lifted extra taxes imposed on the very rich, many who left France fleeying this extra tax came back because they are not against faire tax as their country needs it for public services: education, health, agriculture, roads, unemployment benefits for job seekers, housing..., that make them very proud of their country!

But right now, French tax payers are making it clear, if their salaries are increased, they will stop the upsiring because they are proud tp pay taxex, but MUST be able to live on thier salaries!

See in France, it's not the jobless served by tax money blocking government, but those who pay the taxes used to run the country asking for recognition & salary rise so that they too, live well!
Report to administrator
0 #16 Akot 2018-12-05 20:41
Quoting Lakwena:

The government receives the bulk of foreign aid/grant from the same foreigners, but are quick to demonize than CSOs. Yet its (govt) servants steal (grab thru corruption) most of the money.

And when the CSOs say: (thief, thief)! the government, instead of catching the kawukumi in public offices, e.g. OPM, it vilify CSOs as subversive agents of foreign whatever.

This is why Ugandans MUST UNITE & bring change so that help given is not diverted by Museveni & given to those who don't need it!

Why don't Ugandans see that if they don't throw Museveni out, nothing will change for them & just complaining, blaming...won't help them either?
Report to administrator
12