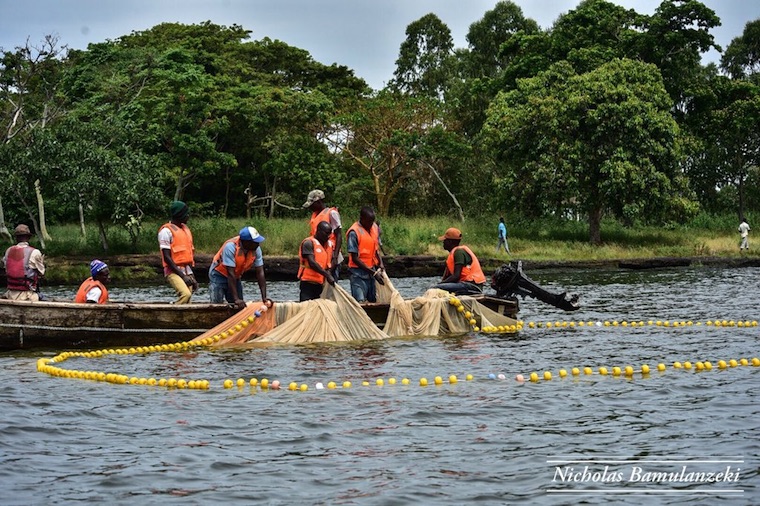 Fishermen casting their nets to search for bodies

A combined force of police, UPDF divers and local fishermen failed to retrieve any bodies from Lake Victoria on the third day following the Saturday boat accident that has so far claimed 32 confirmed lives.

KK Palm boat capsized on Saturday evening with over 100 revelers onboard. Only 27 people were rescued alive and the fate of over 50 others remains unknown.

Today morning, the fishermen cast their fishing nets hoping to trap bodies under the water but after more than six hours, they only managed to trap fish and empty bottles.

The police and the army divers also spent the day trying to check inside and underneath the capsized boat to find if there were any bodies trapped but they found none.

After failing to retrieve any bodies, the team tried to use ropes to pull out the capsized boat. But this also proved too difficult. The police director of operation Hassan Mugenyi also joined the team in trying to pull out the vessel but failed.

SSP Zurah Ganyana, police spokesperson said although hopes of finding any survivors are almost now diminished, the operation to search for bodies will continue until the ill fated ship is pulled ashore.

Relatives of the missing people were seen waiting ashore for their loved ones. Saul Wamala a resident of Ntenjeru town council in Mukono district was at the beach the entire day waiting to see whether for the body of his relative Godfrey Musisi, a resident of Kasanga whom they suspect was on boat would be retrieved.

0 #1 WADADA rogers 2018-11-27 15:21
The rest of the bodies should have been hidden by fisher men to use them as an enticer to catch fish or have been eaten by fish from within the boat.
Report to administrator