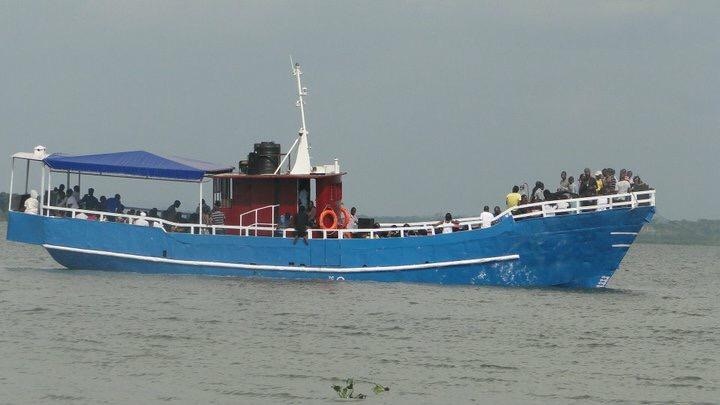 The ill-fated boat that capsized

Several people have perished in a Saturday ferry accident that occurred in the waters of Lake Victoria in Mpatta sub-county, Mukono district.

30 bodies have so far been retrieved from the waters. Police has indeed revised its figures and confirmed that only 27 people were rescued last night. Among the dead is vessel owner Templar Bisase, fisherman Bosco Owecho who was among the first responders to the tragedy and is said to have been overwhelmed by the weight of those he was attempting to rescue.

Akiiki said the chances of finding any more survivors are diminishing after being in the waters for over 12 hours and counting. The ferry reportedly had more than than 100 people on board according to some of the survivors.

Approximately 120 people are said to have been on the boat and some survivors said it was overloaded although the registration list had only 104 names. It's possible that some passengers may not have registered while boarding. According to police sources, more than 70 people are still missing.

The blue boat that capsized belongs to the management of KK Palm beach on Mpatta island in Mukono district. The boat usually docks at Ggaba landing site to take partiers to KK Palm beach every weekend. This particular cruise had been marketed as an end of year boat cruise and attracted several middle class passengers, socialites and celebrities including Buganda kingdom prince David Wasajja, artists Iryn Namubiru, The Mith among others.

Among the dead are local fishermen who rushed to rescue people from the sinking ferry that was reportedly taking in water through a hole at the base after it was perforated by the tractor that was used to 'push' the ferry into the waters from it's repair centre. One rescue boat reportedly got overloaded by the survivors who were by now fighting for the few available life jackets. The rescue boat also sank, drowning more people.

According to accounts by some of the survivors, the ferry started sipping in water through  hole and although passengers were told to spread out so as to 'balance' the ferry, they were too drunk and in party mood to listen to the warnings. Also, videos and pictures posted on social media by the revelers before the accident show several people without life jackets.

According to some survivors, the captain of the ship reportedly warned the passengers that the boat had a mechanical fault and wanted to cancel the cruise and dock near a rock for the passengers to get as they waited for rescuers. Rescue boats were reportedly dispatched but turned back after seeing that the ferry was continuing with its voyage after passengers insisted on first getting to their destination.

BREAKING: Boat carrying about 120 people capsizes on Lake Victoria: So-far 40 people rescued including Irene Namubiru and Prince Wassajja,11 confirmed dead, More yet to be rescued. Most of the people on board are believed to be prominent socialites and local celebrities. #Uganda pic.twitter.com/wgjcClsUnH

Meanwhile, the police and the army marine units have located the wreckage of the ferry and Akiiki said some nine bodied had been retrieved with many more still trapped inside.

May God take them in his fold and give them comfort.

It is not time now to politics and deliberations .Uganda is losing every day its dearest treasure human lives be it on roads,waterways or streets.

The Government must make sure that this never happens and marine police must patrol lakes and check the load and registrations If need be introduce drones or surveillance helicopters and more motor all traffic.

On Uganda roads we are almost dailily witnessing carnage.Huge number of people are lost because of improper cargo of trucks,poorly maintained buses,overtaking on modern roads and poor driving experience of Uganda drivers Maybe the government needs to introduce rigid drivers testing and licences and police and radar patrols be order of the day on many roads to save lives.SOS!!!
Report to administrator
0 #12 Ugthinker 2018-11-26 13:21
Quoting Akot:

Where does Museveni get money he buys vehicles that escort him , helicopters, distributes to who ever he wants?

Uganda is broke but Museveni is 1 very very rich dictator in the world!!!

Akot,
Mine was more about the societal brokenness, nothing financial. State insitigated lawlessness has misled people to the extent of ignoring their own safety! Society has been left to self regulation!

Avoidable deaths are now the order of the day, thanks to our rogue regime. Floods, fires, road accidents now boat accidents in Uganda, can all be directly linked to the ever absent NRM government, only visible in corruption scandals!
Report to administrator
0 #13 Betty Nalubega 2018-11-26 15:19
Wanainchi dear ,

so.... it took aother tragedy to discover that you have a heart and can be reasonable !

I think it makes more sense to demand that the government does its work before tragic accidents happen.

The Police , which seems to be everywhere chasing harmless "noise-makers" should have been right there to make sure that if a boat is going to take on board 120 excited people , with alcohol and loud music , that boat should be fit ,adequately equiped , its crew trained , licensed and merited for the job etc etc.

It has become a deadly habit to ignore the basics. Priorities are all mixed up.
Sometimes , it feels that there is nobody in charge of anything.

Sad !
Report to administrator
0 #14 Wainanchi 2018-11-26 21:25
@Betty Nalubega.Thank you.When talking about the police have you been following news that huge changes have been made and lots of police officers removed including the arrest of its head,former IGP Kale Kayhura who let down his country and all of us.

It was his duty to do these things and not to be involved in illegal things he was accused of and sacked.

We are now witnessing changes in which police is run.I hope new leaderdhip will make better policing and forestall future tragedies.All those who live Uganda will agree with me.

Loss of innocent lives is greatest tragedy for us all Nalybega.
Report to administrator
0 #15 rubangakene 2018-11-26 22:43
My heartfelt condolences to the bereaved, this shouldn't have happened. How many times have we lamented, eh?

Certainly something is amiss; first Uganda Airlines B707 in Rome, countless road accidents now carnage on our waters; when will it end, who is to blame, what should we do about and how are we going to tackle these unfortunate, needless losses of humans?

These questions must be addressed urgently by the authority, i.e. the government. However we as individuals and nation must stop living in a fool's paradise and avoid these alcohol fuelled utopias, selfie- driven cheap stunts and change our ways.
Report to administrator
12