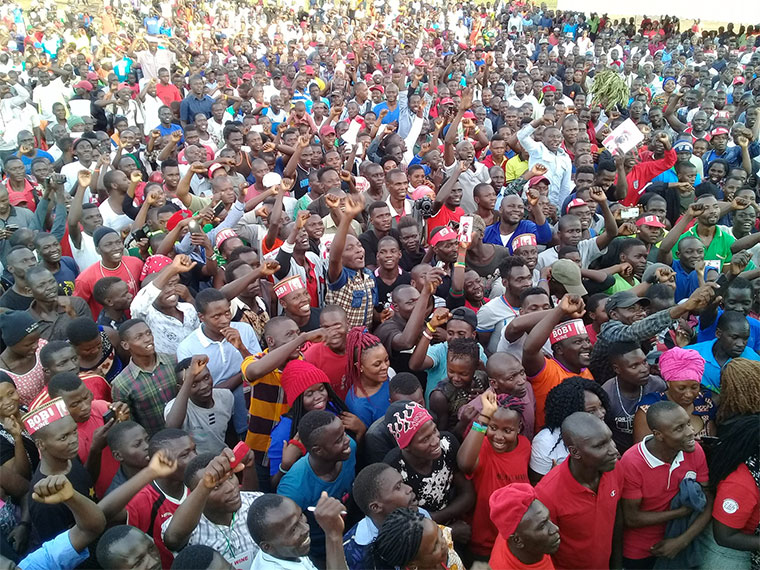 Part of the crowd at the MPs' rally in Makindye

A red beret has become part of their dress code, and, they will chant slogans of Kyadondo East MP Robert Kyagulanyi’s People Power movement as opposed to ruling party slogans at rallies organised by the Parliamentary Forum on Human Rights, Rule of Law and Constitutionalism.

On the side lines of the forum’s rally at Lufuka in Kampala’s Makindye Ssabagabo Municipality, Kassanda North MP Patrick Nsamba Oshabe told The Observer why the 27 MPs who voted against the lifting of the constitutional presidential age limit are campaigning against the National Resistance Movement (NRM) party.

“We were expelled last year by the party chairman. President Museveni himself chased us, and since then, they have isolated us, we are now free to do what we want,” Nsamba said.

On October 12 last year, Museveni met NRM representatives to drum up support for Igara East MP Raphael Magyezi’s bill that deleted Article 102(b) from the Constitution.

With the Article remaining in the Constitution, the 74-year-old Museveni would be ineligible to stand again for president in 2021. During the caucus meeting held in the conference hall at president’s office just outside parliament, Museveni ordered the ejection of Theodore Ssekikubo (Lwemiyaga), Nsamba, Mbwatekamwa Gaffa (Kasambya), Barnabas Tinkasiimire (Buyaga West), John Baptist Nambeshe (Manjiya), Sylvia Rwabwogo (Kabarole Woman) and James Acidri (Maracha East) for speaking against his views.

By the time the bill was put to a vote on December 20, the 27 and some NRM-leaning independents like Busujju MP David Lukyamuzi Kalwanga voted against it to Museveni’s chagrin. They have since been locked out of party activities.

“Our point of departure was the constitutional amendment. We so much desired for a peaceful change within NRM and the country but it was blocked; we now have to fight for change from wherever we can get a platform,” Nsamba said.

“We want to speak directly to the ordinary NRM supporters and tell them that it is useless to cheer on Museveni when the population is still stuck in poverty. It is high time for those of us in NRM to join the push for a change that will get power out of the hands of the military,” the youthful MP added.

As he spoke to The Observer, Mbwatekamwa was on the podium addressing the crowd of mainly youths wearing either red berets or red head bands.

“The bus (NRM symbol) is rotten, it is in a dangerous mechanical condition; we can’t risk collapsing with it,” Mbwatekamwa told a cheering crowd.

Being that the rally was held in one of Kampala’s slummy neighbourhoods, Mbatekamwa crafted his message to appeal directly to the ghetto youths, urging them not to be taken up by his party chairman’s latest money-distribution spree.

“If we in the NRM are jumping out, why should anyone be convinced to joint it? I am an NRM member who believes in People Power,” Mbwatekamwa said.

Ghetto youths have of recent become the focus of Museveni’s purported ‘anti-poverty campaign’ in Kampala. He has handed out billions of shillings to supposed ghetto youth groups over the past three months.

Kyagulanyi who enjoys wide popularity in ghettos is responding by encouraging the youths to sign up for Museveni’s cash but use part of if to acquire a national Id, a critical document that will guarantee them voting rights in 2021.

“Let us continue shaking the tree because the more we shake, the more [Museveni] continues to splash money. Go and pick the money from him and use part of to get national Id and wait for 2021,” Kyagulanyi told the rally.

Through his music career, Kyagulanyi has identified with the downtrodden masses. He is using his new role as a political leader to send a message of hope to the ghetto communities.

He constantly referred to himself as living testimony of the possibilities ahead, urging the ghetto communities to own the “people power revolution.”

“Museveni was a youth like me when he went to the bush with others to fight [Apollo Milton] Obote’s government. Unlike him who caused a war that left nearly 500,000 Ugandans dead, we are mobilising fellow youths to get ready for 2021 and vote him out,” Kyagulanyi said.

“Our goal is to uproot Museveni and Musevenism and get back the country in the hands of the ordinary people,” he added.

All the MPs who were opposed to the deletion of Article 102(b) are uniting under the Butambala MP Muhammad Muwanga Kivumbi-led Parliamentary Forum on Human Rights, Rule of Law and Constitutionalism.

“This forum was built based on the experience of [The Democratic Alliance] which was easy to scatter because it lacked the support of the masses. This forum is forming an alliance with the masses,” Kivumbi told The Observer.

Formed in the run up to the 2016 elections, TDA had promised to be a rallying vehicle for all opposition forces but remained within the elitist class.

“We are expanding the frontlines beyond the constituencies already held by the opposition, we no longer want to waste time the way opposition parties have been wasting time and resources they already hold, we are going to secure those areas but also expand our activities in virgin areas – constituencies that have been considered no go for the opposition,” Kivumbi said.

“If you are putting up a front for change, you have to utilise it to the fullest. DP has a limited depth and scope, you can’t take it beyond Buganda and parts of Acholi, and this is the same with the other parties; all parties have areas where they lack presence,” Kivumbi said.

Tribal leader won't block liberation, but will they still be tribal leadrs after & under which next chief tribal leader as Museveni will leave the tribalistic system on?

True, M7 rules Uganda from a very small patch of Ganda land, but this is the Center of control of Uganda from which he controls tax money, army, police from presient's office/State House & unless UNITY of our people force him out, he will NEVER leave as he MUST hold on to Kampala & Entebbe!

So UNITY is a pre-condition for booting Museveni out or he will eliminate Ugandans 1 by 1, tribe by tribe, region by region!

After reducing Acholi to NOTHING, ensuring Rwenzururu tribal leader understands who the boss is, which is the next to be brought in line & which will defy Museveni?
Report to administrator
123