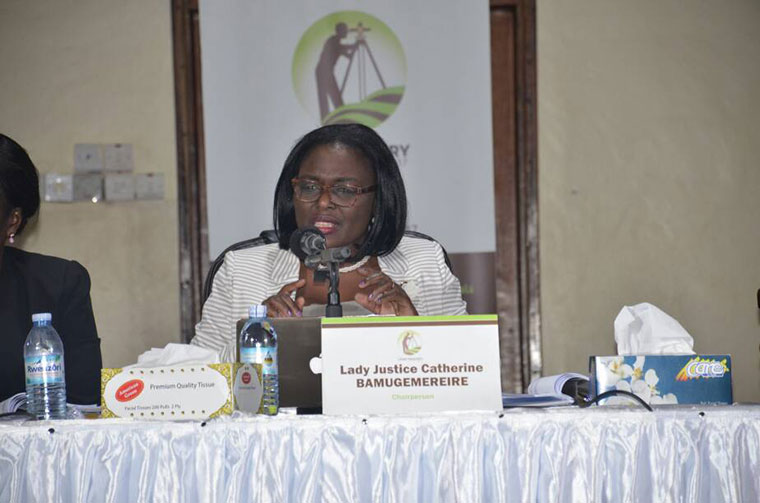 The Chief Justice Bart Katureebe has expressed dismay at the approach used by the Commission of Inquiry into land matters to communicate its findings of judicial excesses in catalyzing land distress across the country.

Justice Catherine Bamugemereire, the chairperson of the Commission issued the statement on Friday, October 26, citing wanton abuse of the criminal justice system and connivance between judges and land grabbers.

"…The Commission of Inquiry has encountered a rising number of orders, rulings, judgments, and injunctions entered by judicial officers which have led to the eviction of thousands of bibanja holders or the giving away of land protected by gazette as a forest or wetland," the statement read.

She cited a recent judgment in which Justice Godfrey Namundi ordered that about one square mile that is part of Kajjansi central forest reserve belonged to Eria Mubiru, Vivian Keza and Peninah Busingye Kabingani, simply because they have land titles over the land.

"This ruling was made in spite of the fact that a copy of the Legal Notices gazetting the forest, dated 1932, 1948, 1968 and 1998, were tendered as evidence before the court. The judge declared National Forestry Authority (NFA) trespassers on the "forest reserve" because they had attempted to stop the encroachment," Bamugemereire said.

She added that the judgment carries the role of degazetting a central forest reserve - which role is the sole preserve of the parliament of Uganda and not the High court of the Judiciary.

Bamugemereire further noted up to four court orders which have been granted over Namanve forest reserve where titles were issued on an existent forest reserve. This triggered off a stand-off between Uganda People's Defence Forces (UPDF) and National Forest Authority (NFA) rangers with private security guards deployed.

"In this case, the court directed the commissioner of land registration to create hitherto non-existent plots in the forest reserve. Some judges and high-level government officers have been named in this forest reserve grab," she said.

The Commission noted that speculators who get insider information on where future projects will be situated, desire titles in areas such as central forest reserves hoping to be paid astronomical compensation arising out the infrastructural project over such areas. The preceding area is one such area bringing a convergence of projects such as the Bukasa port, the Standard Gauge Railway, among others.

"The Judiciary, as well as the government, would have studied that report and taken appropriate action, including giving the officers mentioned in there an opportunity to defend themselves. Nonetheless, we will further study the press release and try to work on it appropriately. Any judicial officer found to have acted outside the law will be dealt with accordingly," said the chief justice.

The Judiciary further says that it takes the issues raised in the Commission statement seriously and would and that they would appreciate if the issues are properly investigated to establish the facts and make appropriate recommendations for a lasting solution.

In the same statement, Principal Judge, Dr Yorokamu Bamwine, says that actions of a few judicial officers should not be used to brand the entire Judiciary a culprit.

"Lately, we are encouraging judicial officers to conduct judicial processes in a more transparent manner so as to enhance public trust and confidence in the Judiciary," said Bamwine.

Please apply the same standards toward law breakers as in other countries.

Wr are treating law breakers like other countries do. We can send our experts to America, Turkey, China, Egypt ,study how they do it,make public report of your findings and apply laws evenly.

You are punishing security and army people and saving thugs and terrorists. Did we see any execution in Uganda ? I America you are dealth with swiftly.In Egypt too,Nigeria as well.
Report to administrator
+1 #12 Wainanchi 2018-11-01 02:40
As per some of fellow commentators objections, may I disagree with them pointing to the Supreme Justice.

What His Honour Katuteebe is telling to those uninformed and I'll biased commentators is that the said judge should not issue press release but instead channelling it proper ways.

Tje Government has its own structure and laws and if they are not followed it would collapse.So in case of that lady,she should be sent for express judicial training.If judges don't follow laws ,who will?
Report to administrator
-1 #13 Lakwena 2018-11-01 11:03
Quoting Wainanchi:

My appeal to a good and noble Chief Justice Bart Katureebe. Sir, do apply and engage to apply Uganda laws evenly.

If any judges are found guilty of breaking laws of the country plead that they are sacked.

Any corrupt judge at any level must be shown exist. Please defend the judicial branch of the Government.Where is the minister?

By the way he expresses himself (broken English), Wanianchi must be one the remnants of Amin's heartless butcher henchmen, which Mr. M7 co-opted into his torture, terror and atrocity machinery.
Report to administrator
-1 #14 Mubiru 2018-11-01 16:29
Katurebe is the man who frustrated Justice Kanyeyihamba to expose corruption in the Judiciary.

Justice Bamugemereire's knowledge of the Judiciary is at par if not better than Katurebe's due to her previous duties and is in position to reveal kawukumi in the Judiciary. .

While Katurebe is comfortably glued to his office chair, The Lady is in the field to help the downtrodden whose land is grabbed by rich thieves.

Katurebe has nothing of her field experience which guided her to berate bribery system Katurebe miserably defends.

Justice BAMWINE had the audacity to whine that actions of the FEW can't be attributed to others.

The man admits that there is corruption by the FEW, FEW depends on the context in which it is used. Five million shs is "few" to looters of billions of our money while a million shs is a pipe dream to us.

Katurebe should visit Wakiso district a den of corrupt magistrates where poor victims of land theft can't win cases before he attacks the woman
Report to administrator
-1 #15 Zaitun 2018-11-01 17:40
Excuse me Lakwena, until 1982, Ugandans were always the best in East africa after sitting EA Exams both Ordinary and Advanced studies.

No wonder Ugandan teachers were selling like hot cakes in Eastern and Southern African countries.

These half-backed English structures started in 1986 to date, and will continue as long as M7 stays in power.

Do you not find it strange that our Ministers and nearly all the big shots have their children outside the country for education?

Simply say that all good structures have been purposely abandoned so as to cause a long lasting damage to the country.

This outfit of Wainanchi is a pure example of failed, exploited, abused Ugandans by the NMR govt. Of course, there are many of his kind over there languishing silently.
Report to administrator
12