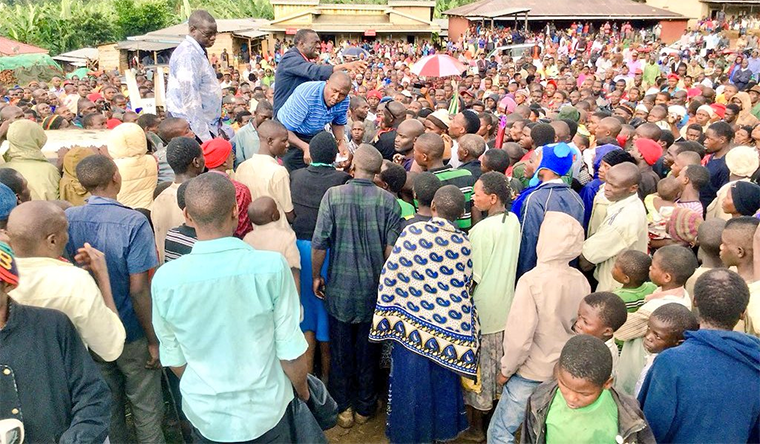 The opposition political party, Forum for Democratic Change (FDC) leadership has told the people of Bududa to reject any plans by the government to relocate them from their area, saying this could be a plot to take over their land.

Besigye said living around the mountains would not be a threat to the people if the government had put in place sufficient measures to conserve the mountains. He says there are many countries in the world which have mountains which are much higher than those in Uganda but they rarely face mudslide problems.

Besigye added that in the early 60s, the colonial government planned and put terraces in the mountains in Kabale district. He says that the same idea needs to be replicated in the Mt Elgon areas.

“They have stolen everything in the country and its only land that is left to steal. Relocating you from your land could be a ploy to steal that land.” Besigye said.

After the 2010 mudslide disaster in the same area that killed an estimated 300 people, government bought land in Kiryandongo in western Uganda to relocate the people of Bududa to avoid a repeat of the disaster. However the relocation did not materialise due to rejection by the locals and corruption by the officials in the Office of the Prime Minister (OPM) who were in charge of the relocation.

When President Yoweri Museveni visited Bukalasi sub-county on October 14 after the mudslide, the chairperson of Bududa district, Wilson Watira told him to expedite the plans of relocating people to safer areas. Museveni apologised to the people of Bududa and said he'd been misled on the relocation of the people from the mudslide-prone areas. He however did not elaborate on how he was misled and by whom.

Besigye asserted that the biggest problem in Uganda is the lack of systems that can preserve the environment. He says the mudslides would not have claimed lives if there were warning systems to alert people about any impending calamity.

FDC president Oboi faulted the government for failing to conserve the mountains and hills in Bududa, exposing the population to landslides. He said the people of Bududa must stand against any plan to be relocated and fight for their land saying that they shouldn't leave their wealth behind.

"The mudslide that killed our people would have been avoided. These mountains here can be conserved but Museveni doesn’t want to conserved. He wants to force people of Bukalasa to leave their beautiful land, their fertile lands out of sheer negligence. For me, I think its a plan by Museveni to ensure that you people leave here but the question is, who does want this land to be left for? Mu dear people we have to stand firm, we have to protect our land.

Besigye asserts that the biggest problem in Uganda is the lack of systems that can preserve the environment, which certainly has led to these disasters.

The government is not doing anything and people are dying, yet you walk in and tell people to stay put without any solution.

This is quite cheap! I thought personal safety should have come first! If the people don't move and the government does nothing, what does FDC advice? I suppose they are saying nothing; so they die. This is a scandal!
Report to administrator
0 #2 Wooden.K. 2018-10-29 14:43
Hello Uganda , here we go again !

What kind of idiots are we who cannot find a solution to this type of a problem year after year ?

I join those who are smelling a rat. Some land grabber is after the Bududa land . The Baduda must resist being relocated .

They should stay and pressure the regime to do something . All this money that is spent in this useless Bazzukulu project should be used to build terraces like the ones that were built in Kigezi during the colonial days.

I swear that if Bududa gets emptied of its locals , the usual suspects will move in with their illgotten cash, conserve the mountains, grap the land and we will never hear of Bududa mud slides again.

If so, then FDC is now a NON political opposing that want change of governance!

But if FDC is still opposition party that wants to replace nrm/Museveni, it MUST call for rejection of the dictator by ALL Ugandans!

Why has even opposition leaders not understood that "it's change of ruler" to have a "leader" that is needed?

Bududa tragedy, those yet to come will worsen sistuation if our peoploe don't wake up to plan/take care of themselves!

Museveni is the reason Ugandans are prepared for nothing!

Jordan was hit by floods after Uganda & they like USA, France, England, Portugal, Nepal are handling it as a people!
Report to administrator
+1 #4 WADADA rogers 2018-10-29 15:24
Okay, i rarely agree with FDC and their radical stunts but if you read between the lines, you cannot trust the mafias in this government.

May be they are looking for land to play their usual games, may be for the rocks in these mountains to feed their cement factories with lime after evicting the occupants.
Report to administrator
0 #5 WADADA rogers 2018-10-29 15:26
I fail to understand how a whole head of state can keep apologizing to Ugandans over everything claiming he was mislead.

Who is this person that is always misleading the president and he continues earning from the government coffers.

Who odes the President consult right from the cooperative bank, commercial bank, appointments, Bududa and more yet to come, which is which, who is fooling who.
Report to administrator
+1 #6 gwok 2018-10-29 16:47
Quoting Wooden.K.:

What kind of idiots are we who cannot find a solution to this type of a problem year after year ?.....They should stay and pressure the regime to do something . All this money that is spent in this useless Bazzukulu project should be used to build terraces like the ones that were built in Kigezi during the colonial days. I swear that if Bududa gets emptied of its locals , the usual suspects will move in with their ill gotten cash, conserve the mountains, grab the land and we will never hear of Bududa mud slides again. Mmwe Abaduda , stay put. There is a plan to steal your land.

My well-considered opinion is that neither the government (read NRM) nor the FDC have good understanding of the options that are available for solving this problem permanently. [no more space here].
Report to administrator
0 #7 Peter Okello 2018-10-31 14:18
Wow! What is the use of opposition in Uganda if they can advise weak and poor people who have just lost over 50 of their folks to refuse to be relocated by government to free and safe land?

In August 2001, Besigye relocated himself to safe South Africa when he imagined that his life was under threat by the government.

How then does Besigye tell the people of Bududa who have not just imagined but have actually suffered recurrent landslides and lost hundreds of their relatives not to relocate to safe places that becuase their land will be stolen by government?

I hope the people of Bududa will be wise enough to see through this cheap politics and move.
Report to administrator