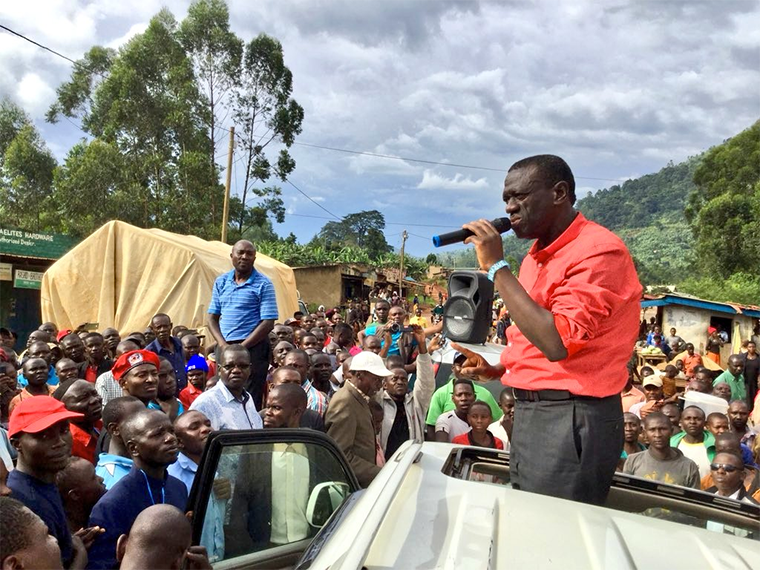 The truck with a consignment comprising mainly of food items was intercepted in Buwangani town near the border of Manafwa and Bududa districts. Bududa district police commander Esther Adeke advised the FDC team led by former party president Kizza Besigye to deliver the supplies to the district disaster committee first that would then distribute the items to the victims depending on need.

It took the intervention of Besigye, Patrick Amuriat Oboi, the incumbent party president and FDC secretary general Nathan Nandala Mafabi to secure the release of the relief truck held for more than six hours.

About 60 bodies were recovered from Bududa after October 11 disaster when river Suume burst its banks triggering off floods that washed down everything in the path. Several people were left homeless and in need of essential items. Government emergency and relief response has been slow and inadequate, and even then, locals are accusing officials of misappropriating the little relief aid by selling it to the victims and traders.

Betty Aol Ochan, the Leader of Opposition in Parliament (LoP) says the police was informed that FDC top party members were travelling to Bududa to take relief items to the affected people.

"We were cleared by Bududa police to go and deliver the relief items to the Bududa mudslide victims but I am shocked that our truck... has been intercepted,'' she lamented.

Aol explained that there was an allegation that the relief items donated to the Bududa victims were being sold cheaply to the people within the community. Samuel Wanda, a resident of Bududa town reinforced the allegation and advised that the items should be taken direct to the affected people to avoid diversion .

Speaking during the handover of relief items donated by FDC on Sunday at Bukalasi sub-county headquarters, Godfrey Wanasolo, one of the victims said most of the items like food, blankets, cooking oil, mattress, saucepans and cups don't reach the intended beneficiaries.

He explained that since the relief items are first given to the district disaster management committee to deliver to them, they disappear before getting to the victims. Matiya Namaleya and Annet Wekoya, both mudslide victims, said they have evidence showing that most of the items are sold off by the local leaders to traders in the neighbouring Bududa town council.

They want donors and government to deliver the relief items directly to the mudslide victims. She said items like blankets, jerrycans, posho are sold at night to the victims and traders wishing to buy cheaply.

Besigye explained that they donated the relief on humanitarian and not political grounds. But Wilson Watira, the Bududa district chairperson accused the FDC leaders for exporting the defiance campaign to the district when they refused to follow the right channels for relief distribution.

He explained that the purpose of taking items to the district disaster management committee is to record and check the quality and safety of the items before they are handed to the victims.

He also refuted claims by the mudslide victims that local leaders are selling the relief items, saying whoever has evidence should be present it to his office for investigations. Watira is the head of the district disaster management committee.

Yours is na regime of mass starvation and self enrichment and trying to use food as a political tool.
Report to administrator
+2 #12 rubangakene 2018-10-29 22:24
What is wrong with aid coming from your own brothers, eh? Does government want foreign aid in form of dollars instead or what?

I do not see logic at all; you see even a fool will now draw their own conclusion, that is; the government want to starve the Bududa people to extinction. We shall not accept this as Ugandans.
Report to administrator
+2 #13 Lakwena 2018-10-30 08:32
In other words, it is leaders who only fight for themselves, belief and families; who are this cruel, foul and shameless.
Report to administrator
0 #14 Akot 2018-10-30 15:41
WADADA rogers, agreed!

Help in all form can only benefit those in need if given directly to them!

People migrating to USA-Europe do so to get help from these that give billions to their useless leaders, yet their poor get nothing!

Has work to repair Soroti-Gulu rail started? We were notified proudly by EU that it gave millions of euros to Museveni for it!

What happend to billions given to Museveni/Mbabazi for development of Norther Uganda?
Report to administrator
0 #15 Akot 2018-10-30 15:45
gwok, understood, but,

Don't forget that Uganda belongs to Museveni & he will do as he pleases in all situations!

It's up to Ugandans to make their statement as to whom their country belong, till then, Museveni will only get more evil in tightening his hold on the country he so longed to own!
Report to administrator
0 #16 Akot 2018-10-30 15:55
Jama, agreed, but,

What better tool to enslave a people if not starving them?

Change of governance is brought about by the starved, poor, oppressed who wake up to see it's them to make their statement & say NO to abuse!

To whom does Uganda formed by tribal lands belong?

Without Ugandans UNITING to make their statement, Musevnei will just go on doing as he pleases!

Even when Ugandans go for Independent Tribal States, it will be more human than what Museveni is doing to them!

Is UNITY that will give Ugandans chance to block the demon, force him out, more dangerous than keeping him through the tribalistic system?

Brexit was because UK elected couldn't make any decision without approval of Brussels, not even say NO to the huge amount of financial contribution impossed on UK!

Why does Museveni rule tribalistically in a country he has no tribal land & Ugandans have no say?
Report to administrator
0 #18 Akot 2018-10-30 16:07
Lakwena, understood, but,