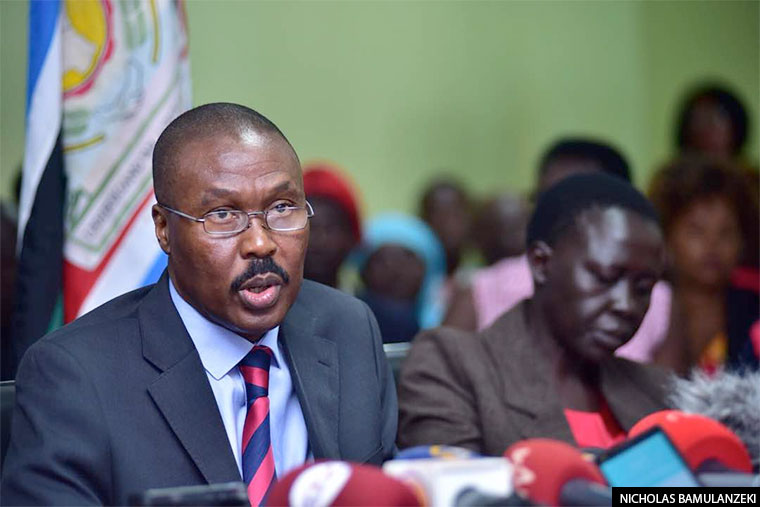 More than 60 leaders of the opposition Forum for Democratic Change (FDC) party from Ankole sub-region have today announced their decision to quit the party.

They told journalists at Freedom Gardens in Mbarara municipality that they decided to quit FDC after realising that the current leadership is not committed to strengthening party structures and visibility.
Those who have quit include Daniel Kafureka, the general secretary for Mbarara district, Mweteise Bintabara, FDC chairperson for Kiruhura district, and a number of leaders from the districts of Kiruhura, Isingiro, Ntungamo, Ibanda, Sheema, Mitooma, Rubirizi, Bushenyi and Buhweju districts.

Kafureka said that FDC has deviated from its core values, putting defiance against making FDC a stronger party at the grassroots.

Bintabara who has been the Kiruhura district FDC chairperson says that the failure by the party accommodate views that go beyond defiance has prompted them to quit. He says that the group of leaders will be joining Gen Mugisha Muntu who quit FDC in September citing irreconcilable differences.

The fall of a region's president-sons has [What?] consequences, our History says. Ask the Northerners].
Report to administrator
0 #3 juwait kali 2018-10-28 09:10
Am worried about my party sheema and now this. I think Besigye should 4get about pride and try to bring back Muntu even if he has to beg.

Sorry I wanted to mean Amuriat Besigye is no longer the party Presido.
Report to administrator
0 #4 petero 2018-10-28 16:52
FDC divide by 2 = NRM win win, Not bad.
Report to administrator
+2 #5 naboma 2018-10-29 11:17
And why has the media not told us that immediately these people resigned, more than 100 people were ready to take up their positions and indeed their positions are now filled. FDC has not lacked leaders.

This hullabaloo will soon fade away and the media which has of late been inclined to market the new formation will be disillusioned.
Report to administrator
0 #6 fkyyyyyy 2018-10-29 11:21
Is this the begining of the end of the road for FDC?

However, my concern is the PP camp, that Muntu is hobnobbing with is as radical as, if not worse than, the FDC defiance camp.
Report to administrator
+3 #7 jose 2018-10-29 12:04
But today we hear FDC leaders from kiruhura, Ntungamo, and all those places but not long ago we heard that FDC had no agents at the polling stations duringthe elections, today u tell us leadewrs from kiruhura, is this to confirm MUNTU was on mission!!

Now he is targetting this up coming politician of kyadondo,
FDC is alot stronger and bigger than Muntu

He should show what he did in the 7 years, about the structures he claims to be good at putting up at grassroot level
Report to administrator
+2 #8 alex erejo 2018-10-29 12:28
How Many FDC MPs did Muntu deliver to the Party from Ankole or atleast his home District?
Report to administrator
0 #9 Lakwena 2018-10-30 08:09
In other words, Judas Iscariot is still alive.

If you read tea leaves, who is bankrolling Muntu's treachery and mischief?
Report to administrator
0 #10 Zaitun 2018-10-30 10:40
All these guys can do what they want but Ugandans should remain united to the last day when we shall be liberated from monsters.

Never mind what they do, for they went to the bush to destroy the country and remain kings of kings.

What have you not observed so far? All those who have left FDC come from the greater Ankole- the very people who are bringing the country to her knees; who are arresting, torturing and killing at will. Tell me, which part of the country has not suffered being sacrificed if not their own?

They took over power so as to enslave the rest of the country only to work for them. Who owns Uganda today if not their sons and daughters.

They simply fear that the opposition takes over power tomorrow and starts a program that will render them pay back what they stole.

They now fear for their lives and what they stole from Ugandans- that is why they want Museveni in power for life!!!
Report to administrator