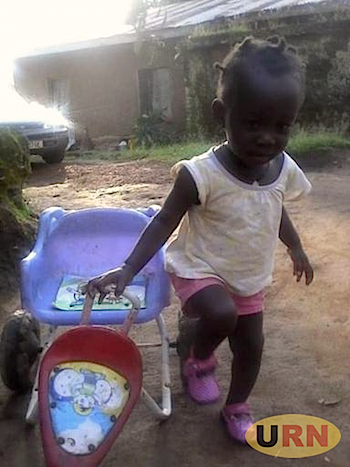 Emmanuelle Lisha Ahumuza, a one and half-year old girl has been reunited with her family after suspected kidnappers dumped her near Virika Cathedral in Fort Portal on Wednesday night after receiving a ransom payment of Shs 2.5 million.

The child was kidnapped from Maguru in South Division in Fort Portal on Tuesday night. Her mother, Hilda Kahinju says they recovered their baby after paying her kidnappers Shs 2.5 million. According to Kahinju, the baby was in good physical health when they recovered her.

Godliver Twinomugisha, the officer in charge of the Criminal Investigations Department at Fort Portal police station says their attempts to apprehend the kidnapper hit a dead end because he used a mobile phone stolen from one of the child's relatives. The phone was stolen about a week ago.

"He first called them for the mobile money pin code before asking them to deposit the money on the same line. We expect that after withdrawing the money he dumped the child," said Twinomugisha.

Ahumuza was kidnapped from her parent's home at 8pm on Tuesday as she followed her mother to the kitchen. Kahinju tried to chase the kidnapper but failed as he took off at a breakneck speed and disappeared into the darkness. Cases of kidnap for ransom became rampant early this year in various parts of the country.

The kidnappers pick up their victim and call their relatives for money with threats of killing their victims unless the family complies. The most prominent case was that of Susan Magara, whose kidnappers demanded for a ransom of $1m (about Shs 3.8bn).

Despite receiving the payment, the kidnappers went ahead to kill her and dumped her body along the Southern bypass in Kigo in Wakiso district.

+2 #1 baingana daniel 2018-10-26 12:32
This OiC simanyi Gilber Twinomugisha is the most STUPID of all Police Officers me ever seen, phone stolen, owner reported, instead of following clues of the Mast being used by the Kidnappers, you just went for Malwa in the Barracks!
Report to administrator
+2 #2 WADADA rogers 2018-10-26 17:06
I guess this family managed to get the baby because they did not rely on the police, otherwise, the kid would have been killed.

Whereas the money is gone, the parents should be glad the baby is back safe
Report to administrator
+1 #3 Fuller 2018-10-26 18:21
Where are the cameras that were hyper-promised on every corner, every angle, under water, over the mountaintops by Uganda's Despot-for-32-years?

While the corrupt regime is fumbling to buy more gadgets as a fake cure-all-crime strategy, this is a happy ending for Emmanuelle, family and community.
Report to administrator