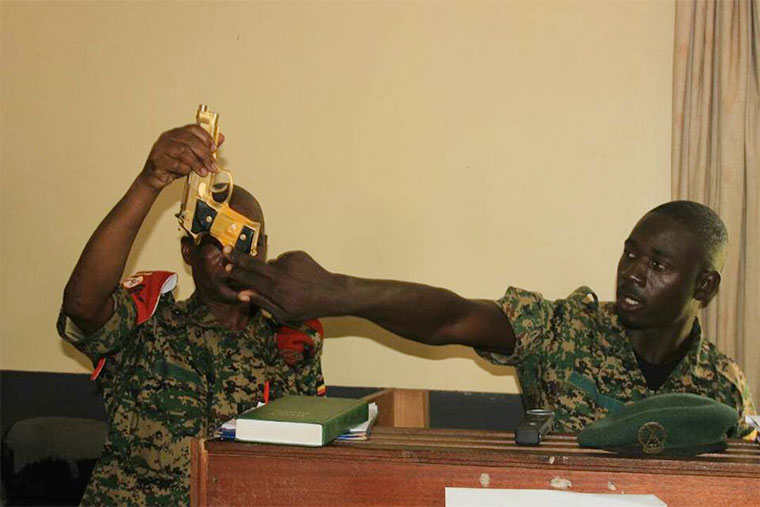 The gold-coated pistol that Kitatta was allegedly found with

Maj David Agaba, the commander of operations in the Chieftaincy of Military Intelligence (CMI) told court that Kitatta confessed to him that he received firearms from police.

The suspects were allegedly found in possession of two pistols, an AK-47 rifle, 55 rounds of ammunition and four army uniforms belonging to the Uganda People's Defense Forces (UPDF). The suspects were arrested in a joint swoop from Busega and Wakaliga in Rubaga Division on January 19, 2018.

Agaba appeared before the Court Martial on Monday as the third witness since he commanded the operation that led to the arrest of the suspects.

He told court that in his 20-year service in the military he had never seen a gold-coated pistol that Kitatta was found with when he was picked up from Wakaliga, adding that he is still wondering where the suspect got the pistol. Agaba explained that during interrogations, Kitatta told them that he secured the pistol from top leaders in police.

The officer, who couldn't complete his testimony due to shortage of time, said Kitatta was arrested for blocking operations to arrest the suspected killers of Francis Ekalungar, the accountant of Case of Clinic. Court Martial chairperson, Lt Gen Andrew Gutti adjourned the matter to later today to allow Agaba to complete his testimony.

Kitatta, who was in court, appeared too weak and only stood with the help of his co-accused.  Lt. Gen. Gutti later allowed him to seat when his lawyer, Shaban Sanywa notified court about his ill health. Kitatta has made two attempts to secure bail. The state is yet to respond to Kitatta's bail application.

Last week, the military court denied his co accused Joel Kibirige bail on grounds that he is likely to sabotage evidence since their trial has already started.

It looks like a "SNS" - Saturday Night Special - a gun meant for assassination of VIPs; the truth might never come out.
Report to administrator
0 #2 Odongkara 2018-10-24 12:44
Of we knew all along the alliance between the police and the criminals.

Actually there's no difference they're of the same police institution as the president saying that the police has been infiltrated by criminals/weevils!
Report to administrator