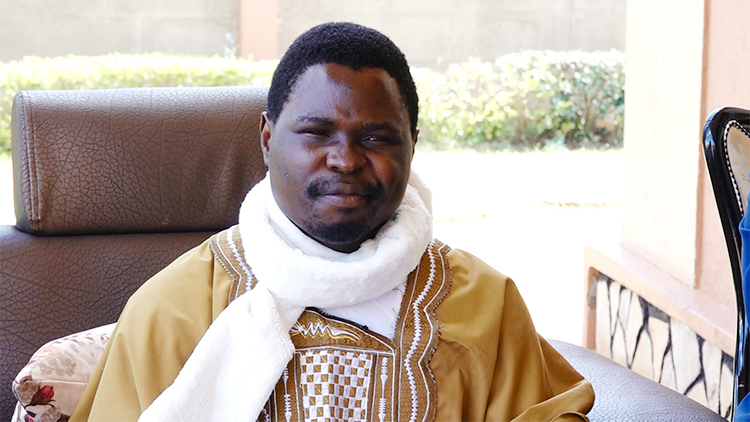 The Mityana Municipality member of parliament, Francis Butebi Zaake says he can clearly remember and identify security operatives who attacked and tortured him in Arua on August 13 during ahead of the Arua Municipality by-election.

Zaake says that besides the faces, he can also vividly remember some of the name tags of the officers that barged into his hotel room and started beating him. He claims that they donned Special Forces Command (SFC) uniform (elite presidential guards) and where communicating in Runyankole and Swahili.

The legislator who recently returned from India where he had gone for specialised treatment made the remarks today Monday while addressing a press conference at his home in Nalumunye in Wakiso district where he shared his ordeal before the press on what happened to him in Arua.

Zaake says despite all the 'torturing' and other inhumane treatment at Kiruddu hospital and Entebbe airport before he went to India, he is currently feeling better and stronger. He adds that him and other comrades in the struggle will not give up until they unseat Museveni.

"I may be weak inside, I still feel some pain but what I want to let you that know am mentally well. They wanted to make me mad, they wanted to make me run mad, I am stronger than even before just like a thorn. And I want to assure them, that the more they continue beating me, is the more I harden in my spirit and soul to fight you till I see you walking out of our beautiful country." Zaake said.

Although most of the victims of the Arua fracas have shared their story, little or nothing about Zaake's experience had been shared thus far. The legislator went missing and later showed up unconscious at Lubaga hospital with injuries on his fingers, ears and other parts of the body.

Zaake was hospitalised at Lubaga hospital since August 15 - two days after he was arrested from Arua together with 33 others who included four members of parliament and supporters of then independent candidate Kasiano Wadri.

All the suspects apart from Zaake have since appeared before Gulu Chief Magistrate Francis Dawa Matenga. It is alleged that they commanded a team of youths that obstructed the president's motorcade and pelted stones that smashed the windscreen of one of the vehicles in the convoy.

However, Zaake claims that on the day before the incident, he was in Mityana meeting the area Local Council chairpersons. He said that since his drivers were not around, he called Kyadondo East MP Robert Kyagulanyi alias Bobi Wine to send him a driver and that's how Yasin Kawuma, one of Kyagulanyi's driver who was later shot dead ended up in Arua.

Zaake further claims that after the rally, they never met with the president's convoy as alleged by the state. He says that after the rally, he went back to to his hotel. He narrates that shortly after arrival, he had voices that drew nearer and stronger shouting that Kawuma had been gunned down which prompted him to leave the room to witness what had happened.

He adds that before he could get closer to the scene, a multitude of gun-wielding security operatives swarmed in, prompting him to run back to his hotel room.

"They are SFC guys [who] I can remember very well…They forced their way into my room, asked me to put my hands in the hair, [and] even before I could do that, I was kicked down so hard with their boots. They asked me to tell them where my colleagues were…I can remember the faces, they had name tags. I can remember those SFC goons." Zaake said.

Zaake claims that while inside the room, operatives tied his hands behind and started piecing various parts of his body using gun bayonets, squeezed his testicles among other awful acts.

"My back was hit after having tied my hands, the piercing with their knives, they beat up my legs saying I should never walk again. They beat up my toes using pliers  - and all that they were doing in my room because they wanted me to direct them to where my colleagues were - something I did not do." he added.

He says that on his return from India, security officers who transported him to his home, kept on pleading with him not to narrate to the public anything that happened in Arua so that all cases opened against him are dropped.

According to reports, the Zaake was dumped at Arua police station where other politicians who were campaigning for Wadri had also been detained. The politicians including Jjinja Municipality MP Paul Mwiru, Wadri among others pleaded with the police officers to take Zaake to the hospital because of his appalling health situation.

Days after, President Yoweri Kaguta Museveni issued a statement on social media indicating that Zaake had escaped from police custody and ended up at Lubaga hospital. Now Zaake has challenged police and government to produce an admission form of the hospital they allege that he escaped from. He maintains that he was unconscious and there is no way he could have escaped.

He also revealed that several government officials have been threatening and trying to bribe his father and wife to entice him out of the struggle. He however says that his legal team is ready to take on a number of cases against individuals who tortured him plus the doctors who insisted on treating him against his will while at Kiruddu hospital.

Asuman Basalirwa, Bugiri Municipality MP who also doubles as Zaake's lawyer has also quashed media reports which were alleging that the legislator had been summoned by police at CID.

"We don't have any reason of evading any judicial process but we have not received any summons as alleged in some media. when they summon us we will be available" says Basalirwa.

you are right when you say that a reporters observes and reports when he is seeing or has seen.That is why I asked why the Obsever reporter who saw and filmed has not said anything for a whole week. .....

The journalist FILE their reports to the Editor. It is the role of the Editor to select [from the piled files] what gets published and when to do so. [The Observer, please correct me here, if I my assumptions, as expressed above, are incorrect. I stand by in the defense of this reporter.

(b) I agree with you that my use of that animal analogy drove the point too hard. Please accept my sincere apology for that. Further, I also agree with you that animals need not do what humans do.
Report to administrator
0 #13 Juma Kato 2018-10-23 20:45
Gwok . if you compare how animals behave to the brutal way Museveni´s thugs treat our people , you must be from the jungle yourself.

Like many sane Ugandans , I was surprised and dissappointed that as the thugs beat up Kawooya , a whole crowd just stood there and watched. . Some of them are heard laughing and commentating as if this was funny.

I agree with Wooden.K. The media , world over , does not only report incidents , it can also help to save a life if need be.

Indeed , if S.K ( of Observer) was the man who filmed the video, he , at least , would have joined the woman who shouted and pleaded with the thugs to stop beating the man they had already handcuffed.

Our people should be encouraged to fight back.
Report to administrator
0 #14 Wainanchi 2018-10-24 01:36
Now L3 Chairman inside Uganda was overpowered and hanged on the three.!! This is one in a series of killings of NRM government people.

And you say it is Ok and if our security forces catch some of opposition saboteurs like Zakke and Bobi Dingo you make big fuss although nothing much serious happened to them! Are our own loyal people,s lives are less important than arm twisting if opposition dogs ?

When shall we see that some of your dogs are publicly executed to show real Justine in Uganda? President Museveni do like George Substantial Bush was doing,send them to their Maker to answer for crimes committed.Gave no mercy on them Mzee,please!!
Report to administrator
0 #15 Omuzire Ente 2018-10-24 12:52
Praise GOD that Hon MP is still alive.GOD will always reward the truth.

Keeping quiet is more dangerous, Operatives wanted to kill the Hon MP that's why they lied to the state that he had escaped to hide evidence of their involvement in Killing of innocent Ugandans.

Its unfortunate that those with power are miss using it to isolate NRM from people.

The earlier their names are shared with court. social media and the International Community the better for future justice. Its true this regime will not try them will be brought to book after this Government no matter how much period it will take.

This will go along way to identify these people who what to plug our country into unnecessary wars, Both the Later Kirumira and Abiriga were killed with a message thye wanted to deliver to the President.

All victims of torture need make public names of these people. The notorious soldiers of Idi Amin were made public and some died of poverty in Congo like Lt. Col. Maliyamungu.
Report to administrator
12