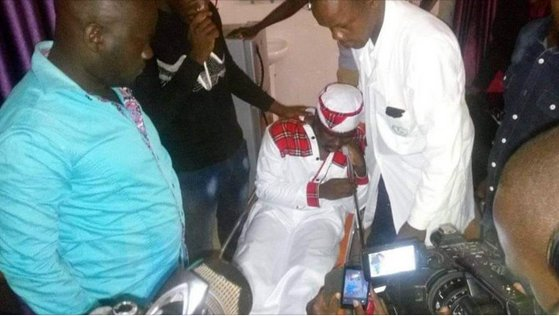 Police whisked away the Mityana Municipality MP, Francis Zaake Butebi shortly after his arrival at Entebbe airport and drove him straight to his home village in Butebi.

Zaake jetted into the country at 7.40am this morning from India where he has been receiving specialized treatment after being allegedly tortured during arrest arrest and detention in August.

Akin to the dramatic scenes when fellow legislator Robert Kyagulanyi aka Bobi Wine was also whisked into waiting police vehicles and not allowed to check in at the immigrations , Zaake was also plucked off the plane into a waiting ambulance and driven at breakneck speed to Butebi village.

Police didn't allow Zaake's wife, Bridget Namirembe and his lawyer, Asuman Basaalirwa who were waiting for him in the VIP Lounge to receive him. Namirembe wondered why police blocked them from receiving the MP at the airport yet they were cleared on Wednesday evening.

"When I tried to get off the plane and follow, I was told by airport authorities that I would be arrested and I was informed our luggage was also taken." Namirembe said.

The deputy police spokesperson, Patrick Onyango issued a statement on Wednesday evening, saying only close members of Zaake's family will be allowed to receive him.

Later, addressing journalists at his home, Zaake said his health that had improved but has now worsened because of the way he was handled by the police in addition to the jet lag.

He warned that police will not allow any public gatherings or rallies along Entebbe road in connection to Zaake's return since they contravene the Public Order Management Act. However, there was no police deployment along Entebbe road just like the case was during the return of Bobi Wine from the United States last month.