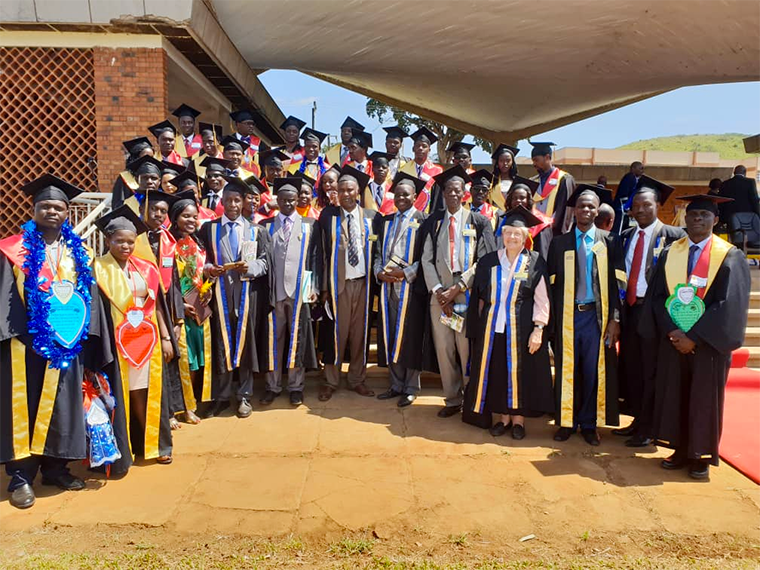 The First Lady, also minister of Education and sports, Janet Museveni has challenged the educated youth to use their acquired school knowledge to turn around their future and that of the country.

Ms Museveni who was presiding over the 9th graduation ceremony of Busitema University at their campus in Busia district, urged the youth to build on the education that they have attained to make Uganda a better place.

“The 21st century is driven by knowledge and understanding; use the knowledge you have attained to respond to challenges in your lives and your country. There is a culture among young people that demands for rights and blame everybody else for their situation…I urge you to work hard and achieve excellence.” Ms Museveni said.

She also called for the periodic review of courses that universities offer to make sure that they are relevant to the demands of the job market and Uganda’s development agenda.

“We must produce employable graduates; this calls for proper planning and with the resources we have, we shall definitely do better,” Ms Museveni said.

Professor Venand Nantulya Mukatabara, the university chancellor called on government to increase funding to the university so that they increase on the teaching staff level currently at only 22 per cent.

“At Busitema we are offering programs which address the important national development agenda. I encourage government to invest in the development of Busitema,” Nantulya said. He said universities across the country should provide solutions to the challenges facing the country but they can only do this if they are properly funded.

For her part, Prof. Mary Okwakol, the vice chancellor of the university, said in the 10 years of their existence, Busitema has tried to teach subjects that are relevant to the development of Uganda. She said courses in agriculture, public health, climate change, agribusiness, engineering among others have produced graduates who are not job seekers but job creators.

“Most of the programs that we offer are unique and we are the pioneers in the country,” Okwakol who is retiring in April next year as the vice chancellor after serving for 10 years said.

1,080 students graduated with degrees, diplomas and certificates in different science subjects including 43 doctors; the first time the university is graduating them. Busitema is a collegiate university established in 2007 after the merger of six tertiary institutions which were offering different courses. These include colleges are located in Busitema, Arapai, Nagongera, Namasagali, Mbale and Paliisa.

“The 21st century is driven by knowledge and understanding ......


Precisely put, Sir. The F- Lady has thrown banana pills in front of her. Will she step on them yet again, as was the case with "sanitary pads" in Parliament?


With endless laughter, Gwok what do you mean
"F- Lady"? I hope it's not the universal meaning.

Sir, the subject here is the First Lady's statement. As such, the abbreviation F-Lady can mean only one thing - FIRST LADY.

Precisely put, Sir. The F- Lady has thrown banana pills in front of her. Will she step on them yet again, as was the case with "sanitary pads" in Parliament?

With endless laughter, Gwok what do you mean
"F- Lady"? I hope it's not the universal meaning.

First Lady, of course. [The Observer gives us very limited space here, so one must shorten / abbreviate some words where possible].

I do not know about that universality, which you mentioned. I am a willing learner. Please say what it is.

Without much further ado, I consent to F-Lady as is.
Report to administrator
12