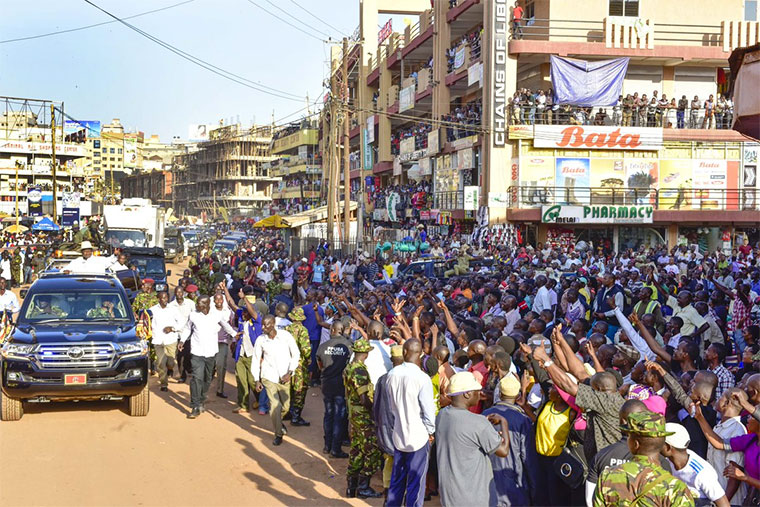 Museveni made several donations during his tour in downtown Kampala

President Yoweri Museveni dished out more than Shs 3 billion to traders in downtown Kampala on Friday during his tour of the area.

The donations are even likely to increase once the details of smaller Saccos are fine-tuned and submitted to the President's Office for consideration. Museveni promised the traders even more money and more goodies - literally promising to solve all the financial problems raised by the traders.

This was Museveni's first tour of downtown since the commencement of elective politics in 1996, almost 12 years after he assumed power. Museveni bluntly told traders that they had abandoned him by electing opposition politicians and he'd abandoned them in return.

Museveni visited six groups during the the tour that started at about midday and ended at 7:00pm. At Nakasero market where Museveni addressed the first rally, he donated Shs 100 million to the traders' main Sacco and promised a further Shs 10 million for each small Sacco.

This reporter was told that there are over 20 smaller Saccos - meaning that the president will hand out more donations in excess of Shs 200 million. From Nakasero, Museveni proceeded to the Old Tax Park where he announced a donation of Shs 500 million to the taxi operators main Sacco. He also promised to donate Shs 10 million for each small Sacco.

In Owino, the president promised to pay the Shs 4.5 billion debt that traders owe to DFCU bank. Government, he further promised, will help traders to develop the market. Museveni then headed to Qualicel Bus terminal where he met groups of traders from various arcades. He launched Kampala Acarders Advocacy Forum (KAAFO) Sacco and blessed it with a donation of Shs 100 million.

Museveni further promised to fund 10 women from Kampala Women Traders Development Association (KAWODTA) who requested for financial support as they plan to go for a study trip in Turkey.

Museveni's penultimate mini rally was at the market of disabled traders situated on the edge of New Taxi Park. Disabled traders under Kampala Association of Disabled Traders Company Limited are consumed and locked up in a land row. He didn't make any donations here.

Kiseka market, the famed opposition arena, that has, for many years been seen as a fermentation ground for opposition protests in Kampala was where Museveni held his last rally. Throngs of people lined the aisles of Nakivubo road and cheered Museveni as he entered Kiseka.

For instance, Museveni referred to a Runyankore proverb at various rallies that goes; "amazi kugagira ngu otanyoga, oti nanye naba ntine nziro." This is loosely translated to mean that "when water rejects you, you in return say you had no dirt that warranted a shower."

To pronounce his return to downtown, Museveni referred to another Runyankore proverb which says; "ekyitita muhima tikyimaraho ente ze." This literally means that "what can't kills a cattle herder, can never kill all his cows."

Museveni said he had finally come to see people who have been politically rebellious for a long time. Museveni said traders should pardon him for abandoning them, but hastened to argue that they should also ask to be pardoned since they were the first to abandon him when Uganda opened the curtains for elective politics in 1996.

Museveni chided traders for electing "useless" politicians who later came to haunt them by selling markets to private investors and city tycoons. Museveni told traders at Nakasero market that politicians who they elected sold markets and never shared proceeds with them.

Since 2011, when Kampala Capital City Authority (KCCA) replaced the defunct Kampala City Council (KCC), traders have been labouring to regain control of markets and market land.

From Nakesero market to Owino, Old Tax Park, traders are entangled in deep seated conflicts over ownership, eviction threats and struggles to acquire land titles among others. Almost, all these markets are saddled in litigations.

Explaining the philosophy of markets, Museveni likened them to nurseries, where traders start horning their business skills. And when they feel, they have graduated from informal trading; Museveni argued traders leave market stalls to other people who want to join. He reiterated several times selling these markets, was a big mistake.

He actually can't see that these 'layabouts' need to get of their arses off to the countryside rather than clogging the city with their "petty trades".

The country side is where they can be more productively engaged in agriculture and other worthwhile activities. What will happen after ten years when we stop importing those fancy good they flog, eh?

This man has lost it completely because these same people will create problems whenever the need more being doled out; then what will happen when the money really runs out and other people also start coming into the city for the 'fool's gold?
Report to administrator
+6 #22 kirya 2018-10-08 00:44
The killer is out buying love after poisoning our children
Report to administrator
+8 #23 Jama 2018-10-08 02:35
Once again our occasional philanthrop, who is in a state of desperado continues to dig in the treasury to buy the people 's conscience.

Its like a manager of a fish public fish pound in which villagers stock fish, and the later claiming to donate to them, the very stock of fish they had stored in the pound.

Who is fooling who? After realising violence has reached its limit,with the Arua events which resulted in his disfavor, jajja is left with bribery as one of his last cards.

Tax money is meant for the improvement of health,education,transport,agriculture ,housing, access to water and electricity(to all Ugandans )etc.

How many tractors, medical apparatus, buses or locomotives, schools, houses, stadiumds etc, can be arquired from the money being wasted,?
Should consider such irresponsible acts as governance or.misuse of funds?
Report to administrator
+7 #24 Bossman 2018-10-08 05:38
“If you try to buy love, you will go bankrupt trying to possess it.” Matshona Dhliwayo.

Poor President Museveni (PPM) . He is running out throwing out money for the Bakoowu people or rather trying to buy love.

I hope people know that this is not Museveni's money. It is their money. HE takes the mobile tax money and distributes it back to the people. Some of it my be mixed with blood, so be careful what you put in your pocket.
Report to administrator
+3 #25 Fuller 2018-10-09 17:09
Why is The Despot-for-32-years' supposed act of generosity generating so much condemnation?

I will answer myself: Because his attempt to buy Uganda's love will not work. It may work for now, but in just a little while it will be demonstrated that he wasted time.

My biggest worry is that before he is ousted (either by he becoming smart and leaving peacefully, or he waits to be shown the door rudely which is coming), he may empty the loot he has in offshore banks.

$14 billion The Despot-for-32-Years has stolen from Uganda (as of 2014) in cash and assets hidden in banks in The Bahamas, Singapore, The Cayman Islands, South Africa, Kenya, Jamaica, and other countries must be frozen so he has no more access to it.

The urgency to remove The Despot-for-32 years has picked up momentum and must accelerate.
Report to administrator
0 #26 Fuller 2018-10-09 18:50
[quote name="rubangakene"]....This circus will not last; the act has gone stale way back! it is like "a rat biting your toes at night, when you flinch, it blows cool air over the wound to dupe you to go back to sleep". /quote]

Your sentence about a rat has made my day, thanks a bunch.

Seriously, after giggling (endlessly almost) no one has stated it better -- at least to me -- on today's topic.
Report to administrator
123