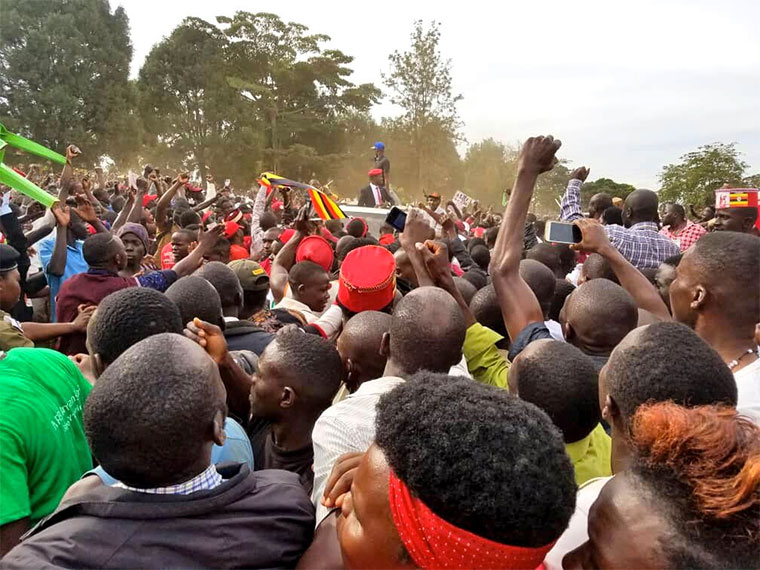 Bobi Wine arrives in Masaka for the DP reunion

After a successful reunion rally at Masaka’s Liberation Square on September 28, DP leaders trooped into Maria Flo hotel with Gen Mugisha Muntu, former FDC president, and Robert Kyagulanyi aka Bobi Wine in tow to put more flesh to a plan to build a unified opposition force against President Museveni in 2021.

In speeches before an ecstatic crowd at the Liberation Square that lasted more than 10 hours, politicians called for a united front to end Museveni’s 32-year-old grip on power.

It was the first outing for Muntu, coming three days after he announced his walkout on FDC and formation of New Formation pressure group. It was also Kyadondo East MP Kyagulanyi’s first rally since he was brutally arrested in Arua on August 13 with 33 others ahead of a vote to fill the Arua municipality seat in Parliament.

Police and army had earlier deployed heavily as word made rounds that the youthful legislator was on his way to Masaka for the DP meet. As the army and the police intensified their patrols and presence at the venue, a convoy of yellow NRM buses drove past. Some saw the drive-by as an act of provocation, choreographed to give reason for security forces to pounce and disperse the gathering.

The deployments increased upon Kyagulanyi’s arrival. Police drove water cannons and teargas trucks into formation and closed off all access roads to Masaka Liberation Square.

Majority of DP leaders are convinced Kyagulanyi’s unbridled People Power movement offers a good opportunity for the 64-year-old party to reassert itself on the national political stage, but the president general thinks otherwise.

“Let’s not claim to own supporters; what we have is a mass of Ugandans tired of President Museveni’s government. We still have people for example in Gulu who say it should be Norbert Mao and no-one else, you’ll get the same voices from Ntungamo saying it should be Mugisha Muntu, yet those in Buganda feel it should be Bobi Wine,” Mao said.

Mao agreed with most speakers that opposition forces need a common strategy and DP must have a huge imprint on the political scene.

“Muntu is talking about a new formation but there is a chance for him to be part of the old formation [DP], Bobi Wine has repeatedly said that his background is DP. What DP needs to do is to reach out to all the forces of change and convince them to work with DP,” said Masaka Municipality MP Mathias Mpuuga.

To Mpuuga, Kyagulanyi’s rising star offers DP a chance to achieve what it has craved over the past 64 years, a view also shared by former DP president general, Dr Paul Kawanga Simogerere.

While others appeared to be looking firmly at the 2021 elections; Masaka Woman MP Mary Babirye Kabanda’s focus was on the final year of the 10th Parliament. Kabanda said the DP leadership should work towards snatching the current opposition leadership from FDC by taking full advantage of Muntu’s departure from Uganda’s biggest opposition party. She suggested that DP snaps up the pro-Muntu FDC MPs.

About 26 of the 37 FDC MPs are said to be leaning toward Muntu’s New Formation unveiled on September 27 at Hotel Africana in Kampala. Under Article 83(2a) of the Ugandan Constitution, the 26 MPs will be free in January 2020 to defect from FDC and join any political party of their choice.

If the 26 FDC MPs agree to join their 15 DP colleagues, DP would replace FDC as the main opposition party in parliament and would be free to name the opposition leadership.

Interviewed, Muntu said that much as he believes that by 2020 they will have built a strong coalition of opposition forces, the focus is not about forming the shadow cabinet in parliament.

“Our focus is on forming government in 2021; we are building this unity to give us capacity to remove this regime,” Muntu said.

There is word that Muntu’s engagement with DP could lead to DP being rebranded and renamed the New Democratic Party (NDP) but Muntu told The Observer that his engagements are not limited to only DP, but all opposition political groups.

“We are talking with DP, Hon [Asuman] Basalirwa’s JEEMA, Bobi Wine, CP and all the other opposition forces, and the engagements are about forming a strong coalition ahead of the next general election,” Muntu said.

Speaking in Masaka, former UPC president Olara Otunnu said it should be Kyagulanyi to take the lead but Muntu said their talks hadn’t tackled the issue of leadership yet.

“We haven’t talked about leadership positions; as of now, we are focusing on building the infrastructure that will take us to 2021. It doesn’t matter who leads the coalition, what matters, is how we galvanize the support,” Muntu said.

Kyagulanyi declined to be interviewed but said in his speech to the gathering that he had learnt to always do whatever he has to do whenever an opportunity avails itself.

Earlier in the week at a press conference at his Magere home in Wakiso district, Kyagulanyi did not speak directly about his presidential ambitions like he did in Masaka.

“While I am willing to take on the mantle and play my part in this struggle, we must understand that I cannot do it alone; neither can Hon Mao, Dr Besigye nor Gen Muntu. No political party or political leader or organization will achieve this victory alone; we must work together as Ugandans,” Kyagulanyi said.

Before his speech, Kyagulanyi sat quietly under the tent, occasionally checking his phone but evidently overwhelmed by the praise heaped on him by his senior political colleagues.

+3 #1 Wooden K. 2018-10-03 18:01
Ladies and gentlemen . under another topic , I challenged all Ugandans , particulary the ones who put their cooments here regulary , to write a short list of the men and women they would choose as their leaders.

Only one person was brave and intelligent enough to respond .

It is pity that even Mao goes curcumspect about the subject.

When they are in the House , they will claim the right to have a go at Super Glue.
Report to administrator
+4 #2 Wooden K. 2018-10-03 18:05
In other words , all the Opposition groups should work together and indentify strong candidates that can stand and be elected as MPs.

Muntu, Besigye , & co should consetrate on coverting NRM people to the opposition in the Westen Region.

Mao , Waduri, & other should take the north

Nandala Mafabi , Amuriat Musumba , Mwiru , & others should take care of the East.

The rest of Buganda has strong opposition base and candidates that can easily be elected . They only need to be motivated .

Otunu , Byanyima and others can head the external wing .
Report to administrator
-3 #3 Mama Mia 2018-10-03 18:45
Well, Norbert Mao and Muntu are some of my favourites to lead this country but the way I see things at the moment, they seem to be confused by opportunists to the illiterate Hon. Swine, our new Idi Amin Dada.

This leaves General Katumba as a stand alone favourite.
Report to administrator
0 #4 Ugthinker 2018-10-03 19:15
Mugisha Muntu will have my support if he can agree to be led, short of that, he is just like any other politician.

If Leading politicians think that they can shortchange those that have evidently sacrificed for this struggle against Museveni and ignore all their contributions, I don’t think Ugandans will trust them with running the country.

I think the political awareness showcased in Uganda today is largely due to Dr Besigye’s resilience.

Anyone wishing him away is not just, and should be shunned because they are not honest! Uganda has suffered a lot due to dishonesty leadership, they should this time round be avoided.
Report to administrator
0 #5 Kent Mawa 2018-10-03 22:49
Wooden makes a very good point , as usual.

What happened in Masaka should be repeated in every region. The Opposition needs to re-introduce itself to the people.

The momentum is there ; the dictator is weak and confused ; the World is paying attention for the first time in 32 years.

The only reason why NRM still wins in rular areas is because the voters only see and hear from the Dictator and his scouts.

The strategy as suggested by Wooden is a smart one. I would add Cecila Ogwal`s name on the list of the opposition leaders that would do a lot in convincing the people in the north to join the campaign to save Uganda from the Dictators evil plans.
Report to administrator
0 #6 Jama 2018-10-04 01:55
It could be preferable for the mostly coveted Bobi to remain in the middle of this opposition, political imbroglio.

He can play a major role as a catalyst,towards the unity of all those who wish to see jajja out of state house.
Report to administrator
0 #7 Marcello 2018-10-04 08:48
I long for another time Norbert Mao will lead DP on a campaign trail rather than always ready to ride on the backs of other candidates.
Report to administrator
+3 #8 Budapest 2018-10-04 11:42
It's difficult to talk about a coalition or an alliance in this country to contest for state power without talking about the great Besigye. The success of any alliance will depend on the moves of KB.

And that's why I pity Muntu and by extension Mao. You can't discount the importance of KB in this struggle. At the moment he may look weak, but get him on a campaign trail, and his true colours will come out.

This is why Bobi needs to keep hic cards close to his chest because DP can't handle the regime however rejuvenated they are. FDC has come real close and has to play a part.

It's unlikely that a coalition of Muntu and Mao can ally with KB. In all this, the uniting factor appears to be Bobi but he seems to prefer DP because he's more appreciated there.

It's a catch 22, because Bobi knows that his popularity is partly down to the fact that he's an independent, so he risks losing a chunk of his support by formally joining any party.
Report to administrator
0 #9 Socrates 2018-10-04 14:11
Mama NRM, you are back again,with your nonsense?

Your way of expression indicates how confused and state of panic in which you must be,like your boss and fellow cadres.
Report to administrator