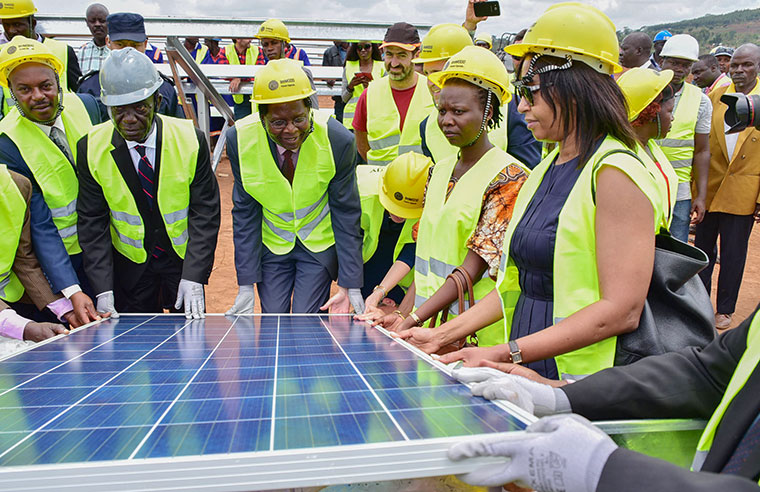 Vice President Edward Ssekandi has laid the first of the 68,000 modules of a pilot solar power park in Kabulasoke in the central district of Gomba.

The project being done by Xsabo Group covers at least 120 acres. Last week, construction officially kicked off for a solar power plant that will be the largest in the region when it is commissioned by President Yoweri Museveni in November this year.

Kabaka Ronald Mutebi of Buganda is expected to lay the last module. The 25MW project is estimated to cost $24.5m. It is the first of a portfolio of XSABO Group’s 150MW solar power project with a total investment volume of $199m in various parts of the country.

Ssekandi lauded Dr David Alobo, the project initiator, for setting an example for Ugandans in the diaspora and called upon them to set up similar projects.

Ssekandi also stressed that the pilot solar project has already transformed lives in Kabulasoke with people using the sum of over Shs 2.5bn paid in compensation for their land to improve their lives.

Construction phase will employ more than 200 people. Dr Alobo said Uganda needs more affordable electricity. He said the notion of surplus electricity in Uganda carried by some politicians is misleading.

“How can we talk of surplus electricity when today only 23% to 28% of our people have electricity and several investors who visit our country after being wooed by the president, vice president and other government officials and well-wishers of Uganda decide to put their factories and other investments elsewhere, citing lack of adequate and reliable electricity as one of the key reasons?” he wondered.

Then what is this solar energy plant for? So Uganda can have 'more solar power than it can consume'?

The VP even sings praises to the "investors" for "...using the sum of over Shs 2.5b paid in compensation... to improve (locals) lives." Yah right!

The 120 acres wasted on "investors" need be used for agriculture and farming. The VP should be teaching the locals about modern farming instead of cutting ribbons for outsiders.

Singing praises to every "investor" is a song that has become too old to play.
Report to administrator
+2 #2 rubangakene 2018-10-03 21:44
Power supply in Uganda has again unmasked the folly and fallacy of this government.

Once again we are reminded of the lack of proper quantitative and qualitative research in establishing these so called development.

Why don't they sit down with experts and hammer out a well researched workable master plan before installing these gizmos.

Consider the need per location e.g. solar power/ rainwater harvesting for irrigation concurrent where there is no hydro-power, the need solar power as 'subsidiary', small scale cottage industries in villages etc., the list goes on.

Weigh the pros and cons before falling headlong because every Tom. Dick and Harry/Mary is embracing solar.

Whatever happened to the guy who came to invest in silos for grains and ended up building a Hilton Hotel, you remember that one,yeah?
Report to administrator