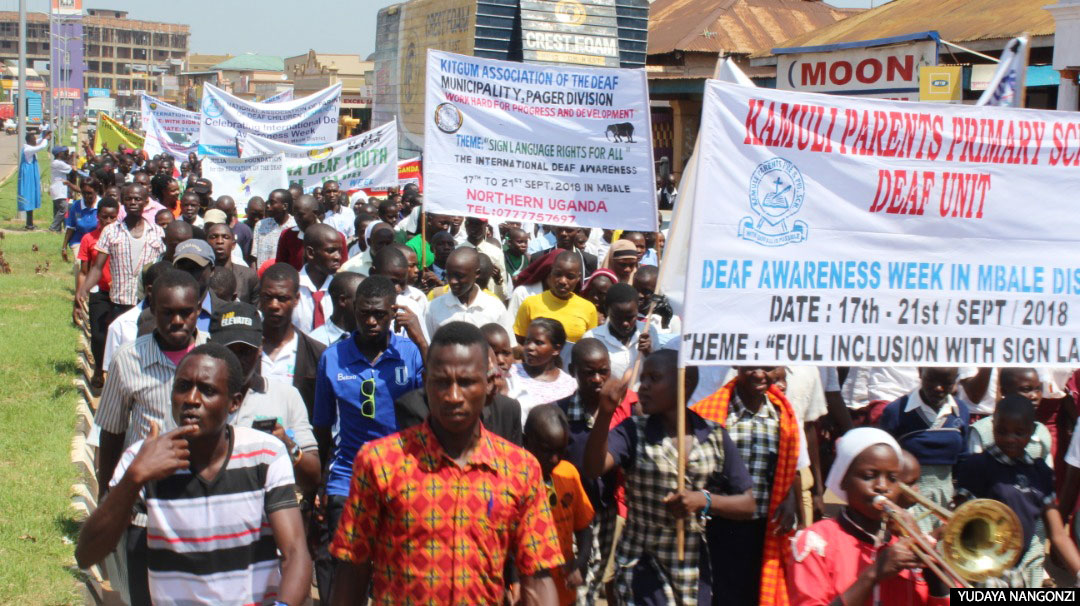 Deaf people during a procession in Mbale

Deaf people in Uganda have asked government to exempt them from the current social media tax. They argue that the tax complicates their communication problems and access to essential services such as education, health, justice, worship, news and information.

Under the auspices of the Uganda National Association of the Deaf (UNAD), they said that they are ready to compile and share a list of an estimated 1,083,649 deaf persons in Uganda as enshrined in the 2014 Uganda National Housing and Population Census report. UNAD executive director Joseph Mbulamwana said the new social media tax is hurting most deaf people because they cannot afford it.

“Most of the deaf people are really poor. Before introducing OTT [over the top] tax, we were communicating well but with the new taxes, our phones are off. We want to communicate but we cannot. It is like government is closing our mouth and does not want us to communicate,” Mbulamwana said, insisting that government should subsidize the tax.

He added: “This is not fair. Does government want us to resort to local communications in which we used to ride bicycles and look for each other to communicate?”

On July 1, 2018, government started imposing the Shs 200 daily tax for social media users despite protests in a bid to widen the country’s tax base. The OTT tax has forced a sizeable number of people to evade it by using virtual private network (VPN) applications.

Mbulamwana said the deaf continually get misinformed of the risk to their lives because of communication gaps.

“While government promotes ABC as a method of fighting HIV/AIDS, some deaf people confuse it for ABC Dent toothpaste. We also had a case of a deaf person who almost died because the doctor was not able to explain to him how to take the drugs. They gave him tablets with instructions to take 2x3 tablets, which meant taking two tabs for three times a day at equal intervals. He instead took six tablets at once!”

As such, he said adoption of technologies to ease information flow is timely and will likely reverse the communication gap. Mbulamwana revealed this at the week-long International Deaf Awareness campaign held in Mbale district under the theme, “Sign Language Rights for All.”

It entailed a series of activities aimed at creating awareness about issues that concern deaf people from September 17 to 22, 2018. They included Uganda Sign Language Symposium, sensitization meetings and visits to community schools, the deaf awareness debate, a football match between deaf men and women against hearing counterparts and cleaning public service centers such as markets and hospitals.

Speaking during the closure of the activities at Maluku grounds in Mbale, the state minister for Youth and Children Affairs, Florence Nakiwala Kiyingi, said government is developing the inclusive education policy to improve accessibility, retention and completion rates of children and youth with disabilities in education.

She also revealed that government has established training and rehabilitation centres in places such as Lweza and Kireka in Wakiso district, Ruti in Mbarara district and Mpumudde in Jinja district where youths with disabilities get employable skills in tailoring, metal work, carpentry and cosmetology, among others.

Nakiwala reechoed government commitment to address stigma and discrimination, strengthen economic empowerment, and promote inclusive education and harness technology and innovations. Meanwhile, the deaf have also embarked on a campaign to teach and promote sign language digitally in a bid to increase the usage and understanding of sign language.

Under the digital content for learning of sign language, learners will be able to access content through enhanced videos aided with graphical illustrations and all content can be stored in one place and accessed online. Learners will also be able to interact with each other and team up to improve their communication skills.

“Many times teachers get stuck in class. Sometimes you have a scientific word for which you don’t know the sign; so, having content on digital platform allows you to cross-check and see the sign,” Hellen Ikitot, a teacher at Mbale Secondary School for the Deaf, said.

Dr Edgar Napoleon Asiimwe, the programme manager, Research at the Swedish Program for ICT in Developing Regions (SPIDER), the funding organisation for the project, said: “Digitalizing will help everyone to know to communicate. For instance, if a deaf girl is raped and she goes to report to police, the police officer shouldn’t look at her as though she is not important just because the two cannot communicate.”

He said the deaf are a community of people with a language of their own that need everyone’s support.

+1 #1 Remase 2018-09-27 17:46
“Most of the deaf people are really poor. Before introducing OTT [over the top] tax, we were communicating well but with the new taxes, our phones are off. We want to communicate but we cannot. It is like government is closing our mouth and does not want us to communicate,” Mbulamwana said, insisting that government should subsidize the tax.

Fellow Ugandans, M7 is ruthless and doesn't give a rat's a...! OTT is meant to inflict maximum pain and suffering to Ugandans because he knows that information gives us knowledge and knowledge is power, thus M7 is making certain that he hurts the deaf people as well.
Report to administrator
0 #2 rubangakene 2018-09-27 22:40
Shame, shame, shame on this government, a government that "thinks on its hooves"!

Instead of thinking through imminent changes using the planning tools of management, they knee-jerk when they run out of money in their coffers.

That's what happens when all the money sits in the rear pocket of the president like sweets to be doled out to kids. It is like an African woman who immediately pulls out her tits when her baby cries without finding out why the baby is crying. Jiggers to you!
Report to administrator
+1 #3 Jama 2018-09-28 01:19
When you are gorvned by heartless, unlawfull an unfaithful individuals expect such things to happen .
Report to administrator