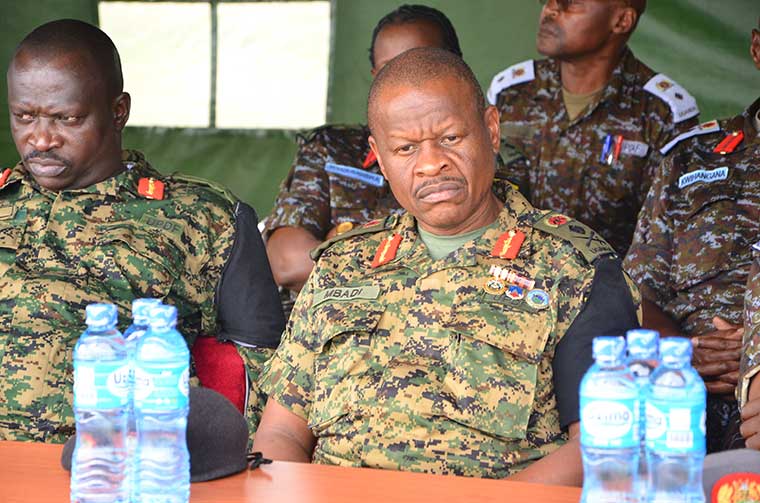 Members of parliament on the Defence and Internal Affairs committee have tasked officials from Uganda People's Defence Forces (UPDF) to justify the on-going recruitment of 24,000 Local Defense Unit (LDU) personnel.

The MPs questioned why LDUs are being recruited and yet the president announced that crime preventers were part of the UPDF reserve force.

Appearing before the Defence Committee on Wednesday led by the state minister for Defence Sam Engola, UPDF officials denied knowledge of the 12 million crime preventers.

This was after MPs Muhammed Muwanga Kivumbi representing Butambala county, Lwemiyaga county MP Theodore Ssekikubo and the committee chairperson Doreen Amule raised concern over the on-going recruitment of LDUs by the UPDF.

"So what happens between the LDUs and the currently laid off crime preventers that [have] been officially handed over to UPDF to integrate them into the security system? What is the essence of having LDU recruited and yet we have these locals that are still in police?" Amule asked.

The deputy Chief of Defence Forces (CDF), Lt. Gen Wilson Mbadi told the MPs that he has no idea about the 12 million crime preventers. He, however, said that the army is aware of only 260 coordinators of crime preventers who he said are currently undergoing training at the National Leadership Institute (NALI) in Kyankwanzi.

"When you look at the criteria of selection of the target groups that we’re recruiting into the LDUs, crime preventers are part of them. First of all, we didn’t have their list, so we had to develop a mechanism of getting their leadership…These crime preventers, they were talking about 5 million but we haven’t seen them…at the moment we’re engaging them [leaders] in training in Kyankwanzi so that we know what kind of people we’re dealing with." Mbadi said.

Mbadi further explained that the LDU recruitment is part of the elaborate counter security measures being put in place as announced by the president.

"We have to put stop-gap measures and the LDU system is part of the stop-gap measures. And in law when the reason, situation for which we recruited them is no longer existing, then we’re at liberty to put them back in. That is why recruiting from their own areas and operating from their own areas as foundation security security becomes easier to disengage them once we no longer require them." Mbadi added.

Ssekikubo, questioned the UPDF if there is proper assessment of the recruitment and arming of the LDU with guns to move around the city. However, Mbadi told the committee that the recruitment of LDUs was discussed in the National Security Council as the best option.

"But we also lay off soldiers; it doesn't mean that at the stage of retiring, we should not. We will not fear to retire people because they have been handling guns or that when they go out there, they are likely to turn into criminals. If they turn into criminals, they will be followed by security agencies," said Mbadi.

In March, while meeting a group of crime preventers at Lugogo indoor stadium in Kampala, President Museveni announced that the crime preventers who were initially under police will be integrated into the UPDF.

For long, crime preventers had been seen as former police chief Kale Kayihura project, whose first recruitment kicked off in 2013 under their umbrella body, National Crime Preventers Forum (NCPF). The objective of the crime preventers was to promote community policing.

But their existence raised many questions from the public on their legal existence, with sections of the public accusing crime preventers of engaging in criminal acts, instead of crime prevention.

I did not contemplate the magnitude of this. Uganda is really set -up for violence.
Report to administrator
+3 #2 WADADA rogers 2018-09-27 09:42
That is all they can do, to question but at the end of the day, the Defense team does not need any endorsement from Parliament in order to do their work, the money can be picked from bank of Uganda directly, have you noticed that all money distributed by Museveni is always comprised of new notes.
Report to administrator
+2 #3 juwait kali 2018-09-27 12:00
I have never seen toothless generals anywhere in the countries I have been in as those of Uganda.

They act as though they are boy's scouts. During any of the unrest in the country museveni always springs out militias in army gear who these generals have no clue about.

And then they turn up in Parliament to defend the indefensible. Its high time they joined the people revolution because normal civilians have got more clout than you red collared waragi drinkers.
Report to administrator
0 #4 kabayekka 2018-09-27 20:08
What exactly is causing insecurity in this poor country so that more money is spent on Defence and the Police?

One is of the opinion that many citizens of Uganda agreed that the major cause of insecurity and poverty in the history of this country was the leaders who arm themselves and afterwards do not want to leave power at any cost.

That is why the new Constitution of Uganda 1995 prevailed on 2 terms for the President of Uganda and 75 years old as the age limit for Presidents of Uganda.

The Parliament of Uganda right now is fooling the public that something else is causing insecurity other than themselves.
Report to administrator
0 #5 kabayekka 2018-09-27 20:34
These learned African military men are only trying to do their job to the best of their ability as legislated by this
very Parliament some months ago.

They should be allowed to go home as free men. Every Ugandan citizen that participated in the enactment of the 1995 constitution is well aware of who to blame for the current suffering in the country.
Report to administrator
+1 #6 Wainanchi 2018-09-28 08:32
Uganda Armed Forces are approaching national security and defence in a very prudent and justified way Uganda must defend its own security and sovereignty and we Uganda patriots applaud president Donald Trump statement at the United Nations just yesterday,I think,saying THAT THE UNITED STATES OF AMERICA WILL RESPECT EACH AND EVERY COUNTRY,S INDEPENDENCE AND SOVEREIGNITY AND THE WAY AND MODEL THR COUNTRIES ARE GOVERNED IN RETURN WISE AND GOOD AND EXPERIENCED PRESIDENT DONALD TRUMP

ALSO ASKED OTHER COUNTRIES TO RESPECT AMERICA,S OWN SOVEREIGNITY.

We applaud this new US global approach and n international politics and will demand that Bobi Dingo Wine returns the CIA donated decorated cane as " a symbol against non existent terror,actually few smacks given to Bobi for barking too loud.
Report to administrator
0 #7 Wainanchi 2018-09-28 08:36
As things stand Bobi will need,in addition to returning donated cane which was meant to symbolise Moses resumptions of Jews from Egypt, also to return all money invested in him since the planned project is doomed to fail .

So Muntu made wrong calculation and prematurely bowed down to Bobi Dingo foreign spy and servant.

Down with Uganda traitors and foreign. Servants.Long live Yoweri Kaguta Museveni.
Report to administrator
0 #8 Lakwena 2018-09-28 16:05
But the wildest thing that came out of this Committee meeting, is for Mr. Sam Engola to insinuate that the scene of soldiers brutalizing Photo Journalist Akena and others, the day Hon Kyagulany returned from the US were video clips from Nigeria.

In other words, are there balalo in Nigeria supplying the Nigerian military with Nkoni?

As a scapegoat; It is surprising that Uganda can easily get away with scandalizing the Nigerian Military, by our own UPDF field day brutality on Ugandans.

I wonder what the Nigerian High Commission thought of this scandalous accusation against the Nigerian Military.
Report to administrator