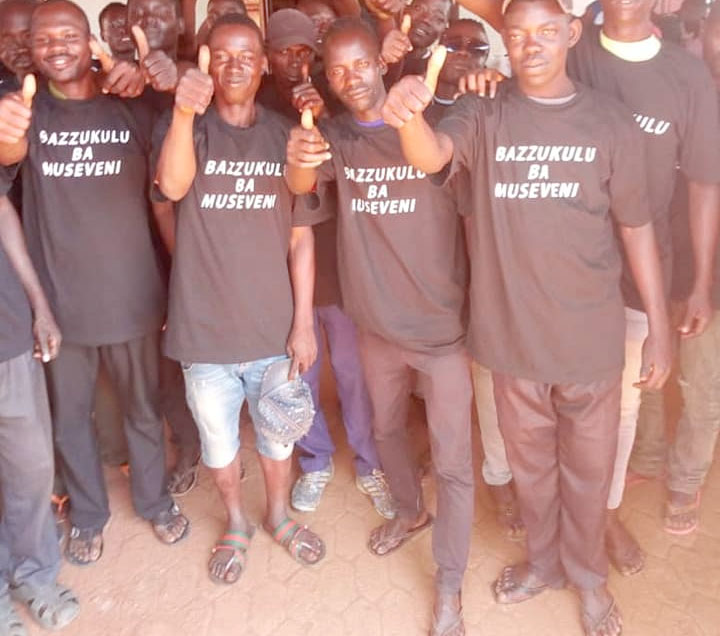 Some of the Bazzukulu Ba Museveni members

Literally translated as Museveni's grandchildren, the group was created as a parallel force to the structures of the ruling National Resistance Movement (NRM) party, to counter People Power, a pressure group formed out of the phrase often used by Kyadondo East MP Robert Kyagulanyi Ssentamu aka Bobi Wine.

It draws its name from Museveni's letters, which he often addresses to bazzukulu (grandchildren). In Lango, the group is headed, by Caesar Obada, a renowned social media fanatic. It is tasked with the duty of mobilizing youth into groups that will be funded by the president to start income generating activities.
Obada told URN that a total of 65 youth groups have been listed for support from the president who will soon be visiting the area to launch their activities.

Richard Omara Awio, Lira district NRM general secretary says the anti-People Power initiative should have been championed through the existing NRM structures, adding that it is so demoralizing to party members, who have not been informed about the group's operations.

Lira district NRM Youth League chairperson George Abdul said young people are currently so aggrieved with the NRM party and President Museveni's approach to governance issues, and unemployment. He says using a new group has rendered NRM party structures useless, adding that the group should not only end at distributing T-shirts to youth.

"That kind of move is the one thing which is really degenerating the little support that the NRM had. It’s making them so much detached because now the party structure is rendered useless. If somebody comes and doesn’t consult even a single party structure. People wouldn’t fight such a project but first of all, the members of the party should be informed. I wonder who is going to mobilise for some of these groups and the criteria they are going to use." Abdul said.

Joseph Okello, a youth in Kole district described this as a desperate attempt to popularize Museveni among young people. While NRM leaders in the region have distanced themselves from the group, Obada says the Bazzukulu Ba Museveni was commissioned by the president himself. Indeed, there are pictures circulating on social media showing Museveni posing with the group's members,

i mean Kyagulanyi says "People Power" but Obada is forming "anti people power"
who is fooling who?

Its a pity a Langi is writing on t shirts worn by Langis in Luganda mbubazukulu ba museveni, what if that translation meant dafts of museveni !!
Report to administrator
-1 #12 kabayekka 2018-09-26 19:22
For heavens sake blood is thicker than water!

Where are your African funeral cemetaries where your great great grand parents are buried(laid)?
Report to administrator
12