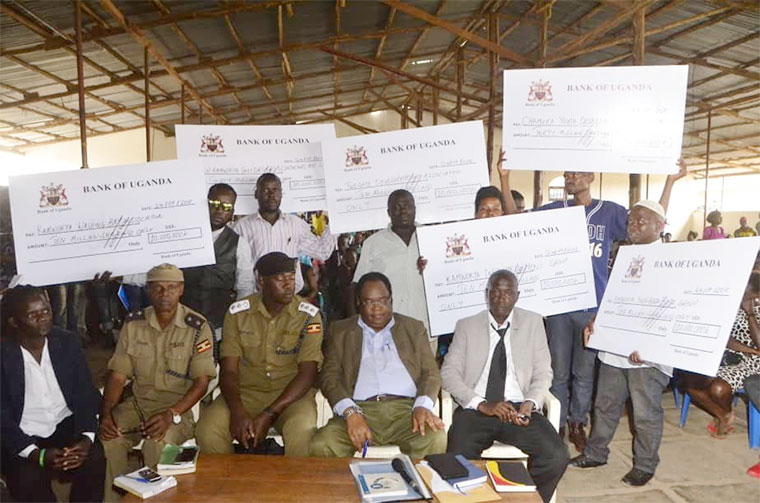 Col Shaban Bantariza delivered the dummy cheques to the youth

Col Bantariza, the deputy government spokesperson appealed to the ghetto youth to stop protesting and concentrate on initiatives that will develop them at a personal level, their families and the area at large.

Kamwokya is home of the Fire Base Crew which is a group of artists led by 'ghetto president' also Kyadondo East MP Robert Kyagulanyi aka Bobi Wine. Kamwokya is also where Bobi Wine spent most of his childhood with his mother hustling to make ends meet.

Bantariza said that if the money is well utilized, they will report back to the president and lobby for more donations so that groups which never received money today equally benefit.

"The money which we have just given out is from HE President Yoweri Kaguta Museveni for the people of the ghetto in Kamwokya. Shs 100 million divided in different batches of Shs 30m, Shs 10m, 10m for different groups that are organised. There are six groups and depending on the activities of those groups they have got different amounts of that money. These groups are organised locally by local leaders under the patronship of Dr Apollo. So today we’re giving this money into their Sacco so that every member of the Sacco can go and borrow.

Bantariza dismissed arguments that the money is being dashed out to neutralize Bobi Wine who enjoys substantial support in the area. The musician turned politician's music production office is located less than a kilometre from where the event to hand over the cheques was held. There were spontaneous protests in the area following Bobi Wine arrest last month following Arua fracas.

"The president I think some time last week you must have seen him doing the same for the people in Katwe, people in Ndeeba and Nakawa. It is a countrywide program but beginning with the most needy. And as you know the urbanites slums are perhaps more needy than my people in Rutookye town council in my village. So it is not about Bobi Wine, it is about the needy people in every location especially the most needy in places like these." said Bantariza.

None of the beneficiary groups had a clear plan for utilizing the donated money. Emmanuel Lutaakome, the chairman of New Kamwokya Taxi Drivers and Conductors Association said that they will convene and discuss what to do with the money.

"This money has come in when we'd already bought ourselves a taxi. Now with this money, we shall sit as a committee and see if we need to buy another vehicle. Of course we can’t detach the ghetto from Bobi Wine, but the fact is when people protest, time and resources are wasted. There is no need for protests," Lutaakome said.

Degeya Galiwango, the chairman of Kamwokya Twegatte Development Association equally said they have no immediate plan on how to use the money. He said that the Shs 10 million which they received is not enough for an association of 64 members and feared that instead, the money is likely to cause chaos.

However, Degeya added that whereas Museveni could have donated the money due to the pressure mounted on the state by Bobi Wine, the ghetto people are Ugandans who should also receive their share of the national cake.

"The 64 of us shall sit down as members and see how we shall invest the money. However we’re likely going to get into fights because this money is very little. But since Bobi Wine gets money in parliament, we as Ugandans also need to get some of the government money." he said.

Grace Nafula, the chairperson of Kamwokya Women's Twezimbe Group said they will use the money to offer small loans to group members.

"As women groups, that money is going to become very handy. It’s not about Bobi Wine, we as women have always needed money at small interests to help expand our small businesses." Nafula said.

They have been "caught with their pants down" so to speak, not a clue in sight.

Where has the central planning that was established on Independence gone?

What is the use of the many institutions representing the populace who should be monitoring right from the grassroots and effecting proper solutions to our problems. We are a failed country, full stop.

We hoodwink the world that we can solve the problems of our neighbours - South Sudan, Congo, Rwanda, Somali etc., "while we can't even wet-nurse our own bazakulu" A real sit hole of a place!
Report to administrator
+1 #12 miki 2018-09-26 05:31
This is what happens when state and its institutions are killed off and replaced by strongman rule through illegal, un-accountable and informal systems to do the functions of the state.

In Mr. Museveni's Uganda the regime is strong but the state is dead. This is recipe for future conflict, uncertainty and instability.

That is Uganda's tragedy right now and everybody must be scared of what may come next.

What Mr. Museveni is doing is robbing money from the state coffers, and through the illegal and informal structures of the regime is trying to throw a few bundles to the mob giving chase to try and reclaim some of the loot for themselves.

This cannot be an accepted way of delivering services even by Mr. Museveni's crooked standards.

It cannot be a substitute for well thought/planned policies or even a substitute for accountable state structures where such policies and services should be channeled. Ugandans need to rebuild the state and its institutions.
Report to administrator
0 #13 Lakwena 2018-09-26 08:26
Mr. M7 is insulting Ugandans in their faces. The man has no conscience.

The money he distributes without considerations and respect; is our sweat, blood and the agony of the hardship millions of Ugandans have to go thru every singly day.

What curse should befall Mr. M7 and his heartless family members to whom he has bequeathed Ugandans birthrights, blood and sweat (taxes) on a silver platter?
Report to administrator
0 #14 WADADA rogers 2018-09-26 09:03
But Museveni did not donate this money as head of state, he donated the money in the name of NRM but one wonders why some of the fans of the donation were police and army officers.