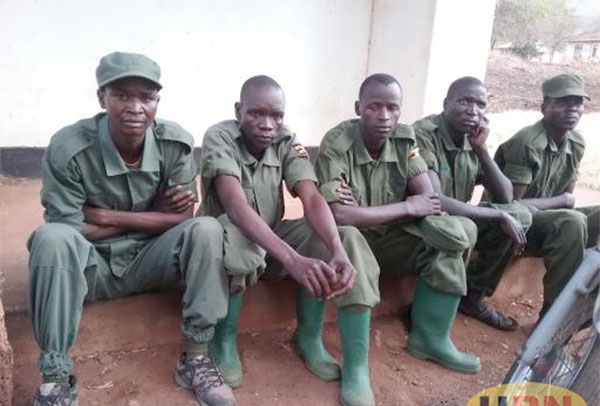 A number of Local Defense Unit (LDU) personnel in Nakapiripirit district in northern Uganda have deserted the force over non-payment.
LDU recruitment under the Uganda People's Defense Force (UPDF) started in Karamoja as early as 2002 to boost the efforts of the UPDF as a force multiplier in the disarmament exercise.

The Local Defence Unit had up to 3,500 personnel across Karamoja region by the end of 2013. They were deployed equally among the districts of Napak, Moroto, Amudat, Nakapiripirit, Kotido, Abim and Kaabong. Each LDU personnel was promised a pay ranging between Shs 130, 000 and 150,000.

However, URN has learnt that hundreds of them have quit the auxiliary force after years without pay. Paul Losike, a resident of Katanga village in Nakapiripirit town council says that harsh conditions forced him out of the force in 2015 after four years of service.

Losike says that much as he tried to seek answers from the authorities, nothing was done until he finally had to quit.
"I was supposed to get Shs 130,000 but I never got anything, they never paid me that is why I left it." he said.

Raphael Adiaka, another LDU deserter from Lobulio-Loomo says he quit the force in 2016 after serving for five years without pay. Adiaka says that although he obtained bank statements from Stanbic bank, Moroto branch, showing financial transactions on his account, he didn't receive any money. His cries are similar to that of Ben Paul Aleper, another LDU deserter.

John Bosco Longoli, another LDU deserter from Loomo in Nakapiripirit says that although there were challenges with payments, the management was very strict on their movements, even when there were problems at home. Longoli who quit just after two years in the force says he lost his wife to another man after failing to fulfill his responsibility as head of the family.

"I have not heard of such records that they are deserting or that they go and don’t come back. If they were there, we would have been informed and those doing it would have been arrested pending investigations. We have 8 battalions of LDUs," Oware said.

The recruitment of LDUs in Karamoja has been helpful in curbing cattle thefts in the region. The LDUs are used for tracking stolen cattle, impounding animals and looking after them while in army detaches.

The news comes at a time of fresh recruitment of personnel for the Local Defence Unit (LDU), a drive undertaken by the Uganda People's Defence Force (UPDF) in line with President Yoweri Museveni's announcement that government would arm 24,000 members to pacify parts of Kampala and Wakiso districts following a rise in urban criminality.

+1 #1 Kelly 2018-09-24 15:24
Anyway, it is common knowledge that whenever the NRM government engages in any impromptu huge money consuming project that doesn't go through the normal procedures (as if it helps anyway), we now know where the money is heading to.

After all the man has asked us where our parents were to create wealth for us while he as piling money onto his children's bank accounts.

In all honesty, the LDU project isn't to serve the nation but a money minting avenue like so many other projects.

If the ones in Abim, Nakapiripirit who reside in an area with low cost of living cannot be paid their meager 130,000, what makes you think the 24,000 in urban Kampala and Wakiso will survive?
Report to administrator
0 #2 Jama 2018-09-25 02:45
The addition of more militia will not solve any security problems but create more.
Report to administrator
0 #3 Lakwena 2018-09-25 09:04
Reverting to LDU is one of Mr. M7's nuisances and evil, which is being presented as a solution to the current engineered self-made insecurity.

Mr. M7 has never cared about Ugandans, which is why now-a-days he brutalizes them in broad-day-light.

That is why on 26th January 2017, he threw away the 32-year old deception and said he only fights for himself, family and belief.

In other words, Ugandans must braze themselves for armed criminals more than never before.
Report to administrator
0 #4 rubangakene 2018-09-25 22:47
Of course they are deserting in droves! What would the commander know?

He is taking care of his own deals or organising security for foreign investors.

In any case these LDCs are just a "hoodwink" to cow the wanainchi.

It would have been cheaper under the circumstances if they made wooden signs that reads; "MBWA KALI" and posted them everywhere, at every doorstep and every compound in Uganda!
Report to administrator