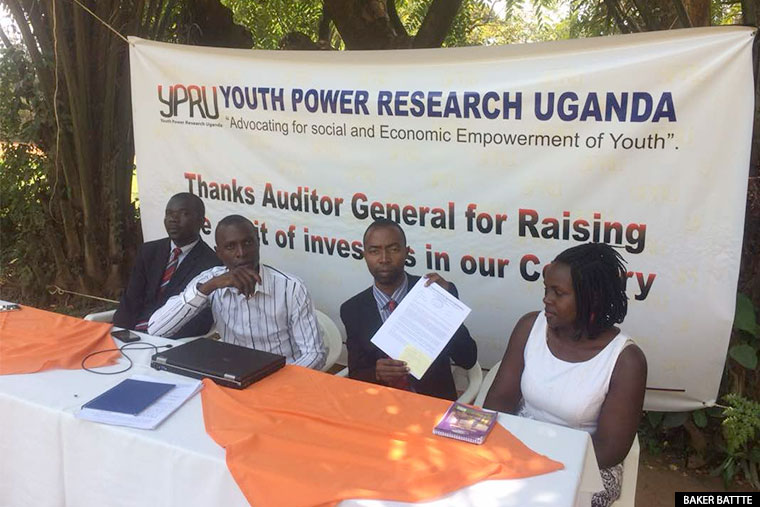 A group of youths have praised the Auditor General’s report for implicating Bank of Uganda in the fraudulent sell of Crane Bank to DFCU bank at a paltry Shs 200bn despite of having assets worth more than Shs 1.5 trillion.

Youth Power Research Uganda Ltd (YOPRU) say they're happy with the Auditor General's report because it gives confidence to potential investors that there are woking institutions in the country incase of any redress.

A report sent to parliament last week has mind-boggling revelations such as the payment of over Shs 12 billion to lawyers and consultancy firms that handled the sale without proper procedures.

The report also indicates that there were no minutes to show how Bank of Uganda arrived at DFCU bank as the best bidder to buy off Crane Bank that had been under the central bank receivership for three months.

“We are happy because our investors have a place to go when their hard earned capital is defrauded by selfish government officials. The Auditor General has delivered on his mandate by releasing a report about the irregular shutdown of Crane Bank by Bank of Uganda -  of which we have been repeatedly demanding agencies like the Auditor General and Inspectorate of Government to produce and deliver justice,” Ben Ssebuguzi, the YoPRU leader said.

He was addressing journalists in Kampala yesterday.

“The more we have rigorous systems that settle disputes for investors, the more we attract investments in our country hence more employment for our youths and more taxes to our government,” Ssebuguzi added.

He said their work as YOPRU is to act as a cushion to investors in circumstances where they feel that they have been ripped off. In such circumstances, Ssebuguzi said, they help alert the president and other accountability government departments through writing to them to take action.

“We do this with passion because we found out that investors need to have people to advocate for them just like we have human rights bodies that defend human rights victims.”

+1 #1 kabayekka 2018-09-21 16:36
Interesting indeed for these youth groups to come all the way to attend to some of the most important items on the state of Uganda.

One sees lots of them(NRM) loitering all over the place looking for some small free money left, right and centre.

The bank of Uganda has been playing all sorts of dodgy commercial games for 7 banks right under these groups' noses for ages.
Report to administrator
0 #2 rubangakene 2018-09-21 22:00
"...their work is to act as a cushion to investors...- they alert the president and other government departments, blah, blah, blah!"

What cheek; these youth should be the ears and the eyes of the 'wanainchi' all over Uganda, particularly in the villages where they hail from.

You see that is where the majority stake-holders/taxpayers of this nation reside.

What if any, are the means they use to disseminate- (pass and explain slowly and deliberately) their findings, eh?

These youth should rethink and the rehash their remit in order to be believed as a going concern, so to speak!
Report to administrator
0 #3 endwa 2018-09-24 09:47
Sudhir money at work
Report to administrator
0 #4 Lakwena 2018-09-24 12:34
As ever before, because nothing is going to be done about it (Report) vis-a-vis the empty "Kisanya Hakuna Muchezo" rhetoric , the Youth's Group welcome is inconsequential.

In other words, how many AG reports containing other billions of misappropriated funds are there, without action upon them? This is just another photo moment for the youths to remember over nothing.

Mr. M7 knows everything and the going on in Bank of Uganda, but will instead look away, because everything is done in his personal interest.

Now that Mitebile has burnt his own fingers what will Mr. M7 do about nothing.

The man will retire and later rest in peace, without a single of his scanty hair on his head disturbed.
Report to administrator