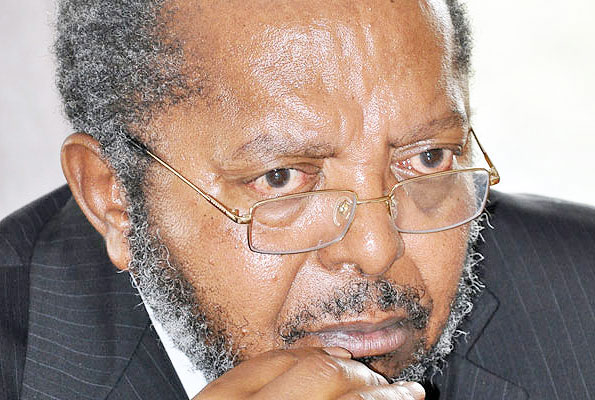 Bank of Uganda has responded to the Daily Monitor story headlined "How BOU blew Shs 478 billion in the Crane Bank takeover". Bank of Uganda took over the management of Crane Bank in October 2016 before the bank was sold to a rival bank, DFCU in January 2017.
Governor, Emmanuel Tumusiime Mutebile in a press statement issued today says the blowing of Shs 478 billion story is "seriously misleading." According to Mutebile, claims that Bank of Uganda (BOU) spent Shs 478.8 billion from an undisclosed account in the Central Bank under the cover of liquidity support is erroneous.
"First, the BOU did not take Shs 478 billion from an "undisclosed account". The BOU provided a loan to Crane Bank and this money came from the BOU's own resources. The BOU is a Central Bank and like any other Central Bank it can create financial assets and liabilities. In this case the BOU created a financial asset (the loan to Crane Bank) which was matched by an equivalent liability (an increase in the money supply)." the statement reads.

This was because a large share of its loan portfolio was not being serviced by the borrowers and because customers were losing confidence in the bank and withdrawing their deposits. Between the end of June 2016 and the end of September 2016, Crane Bank's deposits fell by Shs 148 billion."

Mutebile says as Crane Bank's liquidity drained away, the bank requested liquidity support from the BOU, before the bank was taken over by BOU.
He added that at this point, BOU had two possible courses of action; either to provide liquidity support to Crane Bank or not.
"If the BOU had chosen the latter course of action, Crane Bank would have been unable to honour its liabilities. It would not have been able to pay depositors who wanted to withdraw their money from the bank or repay the money it had borrowed from other banks in Uganda through the interbank market."

"In effect Crane Bank would have collapsed. Because Crane Bank was such a large bank, its collapse would have risked chaos in the financial system, possibly causing contagion to other banks and bank runs by depositors. That would have caused a huge amount of economic damage. No responsible Central Bank could allow this to happen. Apart from the Shs 466 billon of liquidity support to Crane Bank, the BOU also spent Shs 12 billion in resolving Crane Bank."

According to the governor, these were expenses that were necessary to ensure that the assets and liabilities of Crane Bank could be transferred to another bank, thereby allowing Crane Bank's customers to continue having access to normal banking services."

The Shs 478 billion was a cost of ensuring that Crane Bank did not collapse in a disorderly manner, threatening chaos in the banking system and the wider economy and ensuring that its customers retained access to their deposits and to banking services, Mutebile said.

In any case, BOU, Mutebile says is recovering the Shs 200 billion of the Shs 478 billion through the sale of assets and purchase of assumption transaction which transferred assets and liabilities of Crane Bank to DFCU Bank.

The rest of the money (about Shs 278 billion), according to Mutebile will be recovered from Crane Bank's shareholders, who BOU says were responsible for the bank's huge losses.

+2 #1 Apollo Ekelot 2018-09-18 14:04
While BOU under Mutebile could have been right to rescue Crane Bank to avoid a systemic damage to the economy, what Mutebile is not acknowledging here is the cumulative failures or connivance by bank of Uganda.

BOU is the regulator, with a supervisory responsibility over all banks. How come Crane Bank was given liquidity support during dissolution?

Was it to benefit Crane Bank or DFCU? The Bagyenda's are swimming in unexplained cash, yet Mutebile wants us to believe all was done in good faith.

I suppose Crane Bank was to shed its blood for the salvation of DFCU. By the way who owns DFCU?

I know that one of the small owners are Bank of Uganda Staff Retirement Benefits Scheme; by the way did I hear Mutebile is retiring soon? Conflict of interest here right?
Report to administrator
+3 #2 Lakwena 2018-09-18 15:51
The more you have the more you can't protect, and the more you lose!

But who will find out "the whole truth nothing but the truth" about how much is being lost in this Bank of Uganda vis-a-vis Crane Bank saga?

In other words, except more losses and the bad news that goes with, what do Ugandans benefit from it? It is depressing.

Suppose such moneys (l0sses) were invested in agriculture, and e.g., building Grain Silos for excess maize (bumper harvest); would our poor peasants sell their maize grain for a heartbreaking Shs.200 @ Kilo?

What are Ugandans proud of?
Report to administrator
+2 #3 rubangakene 2018-09-18 20:11
Only in Uganda can one see such wanton wastage of taxpayers' money down the drain.

This harks back to the Arab slave traders who used to buy millet in Ajulu near Gulu.

They discovered a funnel in the rocks and that's where you poured your millet and the millet didn't top the rim of the funnel; it just went into the sacks below and the growers were cheated off their millet willy-nilly. History really does repeat itself!
Report to administrator
+2 #4 kabayekka 2018-09-18 20:46
For the simple Uganda citizen on the street of Kampala, this Bank Governor has agreed that 478 billion shillings was spent properly to rescue Crane Bank so that DFCU can take it over.

That is Bank of Uganda provided the bankrupt Crane Bank with a financial soft landing.