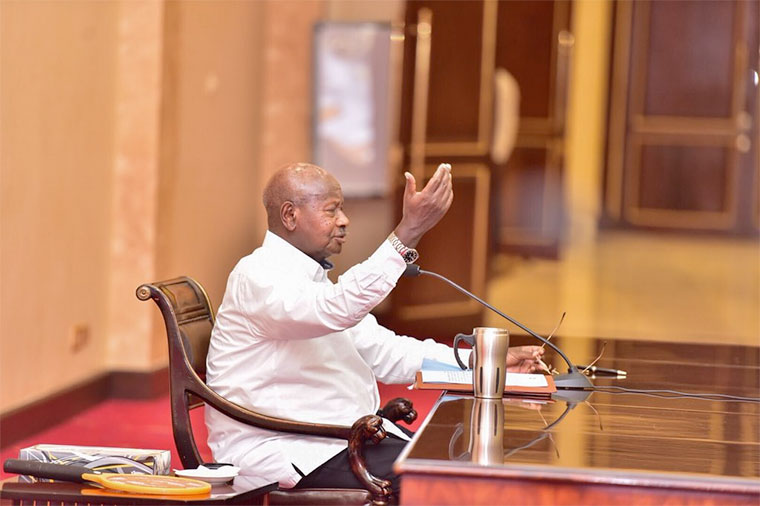 In nine months time, Kampala will be a different city - smarter, cleaner and safer, President Yoweri Museveni has assured the nation.

Museveni said as government moves to implement the elements of a smart and safe city solution, Kampala will be transformed into a modern city; where there's more reliance on technology than human capacity to fight criminality.

This was part of Museveni's national address on the state of security from State House Entebbe on Saturday evening.

A safe and smart city solution enables the inter-linking of public and private networks for more efficient and effective security management. In other words, with the inter-connection between devices and networks, government gets access to new tools so as to have a wider outlook of the security of an area at any given time.

Museveni said machines are cheaper than human beings, adding that government will rely on human beings for a short time then scale down the number human beings manning security.

He said when one visits modern cities like London, there is more use of technology compared to reliance on human capacity. Museveni said he's annoyed and pained by the killing of innocent Ugandans, adding that having fought criminality with limited means in the past to defeat LRA and ADF rebels, with advanced technology, this will be history.

Museveni's statement comes at the climax of insecurity in the country characterised by assassinations of high profile and low profile citizens. Barely two weeks ago, former Buyende district police commander Muhammad Kirumira was gunned down together with his friend, Resty Nalinya in Bulenga, in Wakiso district.

There have been several assignations in the country, for instance, the brutal assassination of Ibrahim Abiriga, the Arua municipality MP and his brother Saidi Kongo, former police spokesperson Andrew Felix Kawesi, state prosecutor Joan Kagezi, and sheikhs in the country.

The president also reiterated the need to expedite his 10-point security program of installation of cameras, finger printing of guns, use of drones, banning of hoodies for motorbike riders, installing tracking devices on motor vehicles and motorbikes among others.

The smartest thing you can give us is retiring. If you are sorting out cold murders like these one's after 32 years clearly you are not good enough.

In addition I also think your Uganda does not know its priorities spending so much dooo on cameras just to defend a few dodgy MPs while citizens are dieing due lack of enough hospitals or quality drugs. Altmately you can't put cameras in each and every corner of the country.

People, inside and outside the country, are just hungry for change in the president's seat.

Very few listeners pick interest in your pronouncements as opposed to your early days in office when every Ugandan felt cheated on missing your speech.

Let people have a new face in that seat: be it your son or whoever. God Bless Uganda.
Report to administrator
0 #12 Kelly 2018-09-17 15:49
Gwok, I think you have given the best insight so far into what is cause and effect.

The thought of cameras and street guns in the hands of the killers sends shivers down anyone's spines.
Report to administrator
0 #13 Phalanch 2018-09-17 15:59
What part NO, doesn't this man understand , Uganda is fed up with him and his stories ,he lost the credibility along time to think and do for Uganda.

For millions , Uganda is not about buildings or roads as he may think, BUT the livelihood or standards of living of Her people and the economy.

Now is the time to do himself a favour of stepping aside.
Report to administrator
+1 #14 Concerned Ugandan 2018-09-17 16:09
"Museveni said machines are cheaper than human beings, adding that government will rely on human beings for a short time then scale down the number human beings manning security."

Pure reflection of the fact that the 'dear leader' has no fundamental clue about what he is talking about! In the modern cities like London which he is so flippantly using as a benchmark, the technology there is built on a foundation of competent security personnel who in turn depend on a foundation of a competent government. We may have all the most hi-tech security equipment in the world but as long as we continue to have security agencies filled with corrupt men and women who in turn report to corrupt politicians then it will all be for nothing!

M7 is currently too bogged down by selfish competing political interests to realize that what is really killing Ugandans today is the corruption and incompetence of the government he leads!
Report to administrator
0 #15 juwait kali 2018-09-17 16:51
No TWEBZ we are not just gonna replace him with just anyone to end up with the same mistakes again. But you are right he has to go.

What he has done really is to confirm that those 400 and something MPs are more important than thirty something million Ugandans who are starving like you said.

Gwok, I think you have given the best insight so far into what is cause and effect.

The thought of cameras and street guns in the hands of the killers sends shivers down anyone's spines.

Thank you for your complement. Further, I am concerned that by putting his best effort to safeguard K'la M7 ONLY, he is clearly saying that he is not mindful of security in the rest of the country.

Security in K'la is important for all of us, but it is MOST IMPORTANT to M7 because the loss of K'la would mean he would have to rule Uganda from Jinja [or some other area that still sings his praise].
Report to administrator
+1 #17 rubangakene 2018-09-17 21:27
Here we go again, smart cities indeed; what about our countryside, will they remain "dirty" concurrent?

Will the "smart solutions" rectify the slow mas psychological death" of our citizens?

Will the "smart solution" feed our children, pay fees, and hospital bills and cure diseases? These killings and disturbances are just the tip of the iceberg.

The problem of Uganda is much bigger than what you think. Stop "cherry-picking" solution as we go along. Look at the source and root of the killer disease- CORUUUUUUUUPTION!!!!!
Report to administrator
0 #18 kabayekka 2018-09-18 20:56
Indeed smart cities are very modern these days as in London.

One wonders what of the modern countryside of New York or Tokyo for you who have the chance to travel the world at the tax-payers money?
Report to administrator
12