President Museveni’s address to the nation on Sunday evening could not have come at a more opportune moment: violent crime is unrelenting; Uganda’s image is in tatters in international media over the army and police’s brutalisation of opposition politicians.

The continued assassination of prominent figures, attacks on journalists by security agents amidst a general tense mood in the country.

For four hours, the president rumbled through his explanations about where the country has come from and said it had ‘reached a take-off stage’. But did he give the right prescription to Uganda’s challenges. ALON MWESIGWA unpacks the speech.

This was the stand-out issue given the security situation where unexplained murders and disappearances of citizens have become a common feature.

Would this end crime? Can LDUs stop assassinations of high-profile Ugandans?

The announcement has rather become controversial, given that LDUs were disbanded years ago after they became notorious for criminal activity themselves.

Geoffrey Kayizzi, a former LDU officer and now chairman of Mulago, told a local radio station that it was hard for this measure to curtail crime.

“The president hurried to announce this move. At the moment we should be reducing guns in the hands of public not adding more,” he said.

There is fear this move could increase crime with the arming of crime preventers.

Museveni said his government would stand firmly and unequivocally with squatters (bibanja holders) in Buganda, Ankole, Tooro and Bunyoro where they are being harassed by landlords.

He said no eviction of bibanja owners except for the refusal to pay the nominal rent would be allowed; and only nominal rent to be paid and never commercial rent. This was reassuring to people who have been evicted from land.

He repeated past promises he has made to set up a Land Fund through which the government would compensate bibanja owners or landlords on a case by case basis.

The president, however, missed the fact the existing land fund has become an avenue for corrupt senior government officials to loot from taxpayers. According to proceedings of the ongoing commission of inquiry into land matters led by Justice Catherine Bamugemerire, a large chunk of the money allocated to the fund had been drawn by top officials in the guise of paying off bibanja owners.

Museveni mentioned China at least seven times, more than any other country. He praised the country and its leader Xi-Jinping. This is not surprising given that at least two thirds of Uganda’s major infrastructure projects are being constructed by Chinese companies with money borrowed from Beijing. 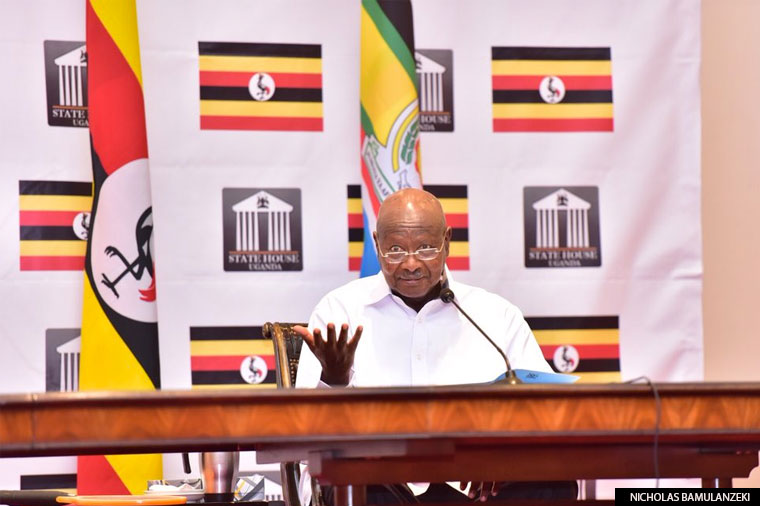 Angered by what his government sees as continued ‘negative’ reporting by both local and international media, Museveni went ballistic against the fourth estate. He said the media was reporting in “a tendentious and mendacious” manner.

Museveni refers to US President Donald Trump as having defeated the media but he did not refer to the fact that for Trump, media houses that report positively are loved while those that criticise him are labelled ‘fake’. This rage over media was unnecessary.

The president also took a swipe at the United Nations, describing it as “useless” and that it had preserved terrorists in the DR Congo.

This in a way shows double standards. Only early this year, Museveni wrote a passionate letter to the UN secretary general after it emerged that the body intended to move its base from Entebbe to Nairobi.

He described the plan as ‘unfair’ since it would mean loss of jobs for Ugandans and other advantages like consumption of local products by UN staff, let alone the geopolitical dividend which comes with hosting a major UN installation.

Museveni asked Secretary General Antonio Guterres to ensure that the base stays put. His wishes were granted.

As a prescription to fight corruption, Museveni gave out a toll free number and that of Major Edith Nakalema, a State House aide, through which he said the public can report directly those involved in corruption.

This sounded good, but it should also be noted that Uganda’s corruption crisis is on-going, not because of a failure to report, but an unwillingness to act on those known to steal public money.

Richard Todwong, NRM secretariat vice chair, said recently they had evidence some of their colleagues in the party were stealing with impunity, building big houses, and the population was disgusted.

And in his recent book, former regime insider Dr Martin Aliker said while negotiating the sale of Sheraton Kampala Hotel with an Ethiopian investor during the 1990s privatisation hysteria, a senior government official in Kampala placed a gun on the negotiating table, and asked the investor to pay them a bribe of $3 million. Museveni was told of the incident and the officials. He was annoyed, Aliker writes, but he did not act because they were his friends.

Museveni said that while government immunisation programmes had helped youth not to die, their parents had not planned well for them – partly explaining why they were unemployed.

The president said he had planned for his children and that is why when they finished school, they didn’t go looking for jobs but are managing their wealth.

It could be true that some parents fall-short of planning for their children but it should also be noted that many parents sell whatever they have to get their children through school.

Heavy expenditure on health care, education and other basic needs make it impossible for a large majority of Ugandan families to save and plan for their children.

Research has found that Ugandans spend 60% of their income on out-of-pocket health expenditures, according to various studies. See full speech

12
0 #11 Angered Ugandan 2018-09-13 17:15
The majority of Ugandans are young people, most of whom do not appreciate the patronizing term "bazukulu" and being dismissed as having nothing to contribute besides "eating samoosas" just because we were not there during the NRA bush war, especially after continuously having our generation's main concern of unemployment swept under the carpet, that "be job creators not job seekers" and then destroying young people's businesses in the name of cleaning up the city and impeding young entrepreneurs' efforts with things like social media tax and mobile money tax.

This age discrimination must stop. We are not second class citizens just because we are younger than those of the NRA bush war era.

In fact, one day those bazukulu who you continue to disparage will be the ones debating whether your memory should be honored or not.

Stop disrespecting younger Ugandans, it works against the country's interests and creates problems for both older Ugandans and the so-called "bazukulu".
Report to administrator
12