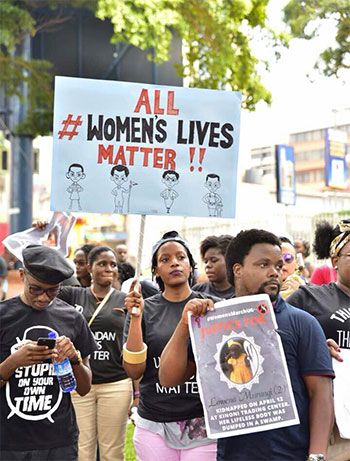 Hundreds of activists took part in today's 'One Million March' to protest against a spate of kidnaps and killings of women in the country.

The march started from Centenary Park to Railway grounds under the protection of the police today morning. Several activists who included women and men held placards reading 'Stop killing us, women's lives matter, her body her future and Ugandan lives matter'.

Dr Stella Nyanzi, the chief organizer of march said as part of the activities, they plan to visit areas and families of the 42 murdered women and talk to members of the community, meet members of parliament of parliament and media as they highlight the plights facing women in the country.

"In terms of the things we’re yet to do, there is a public media engagement which was frustrated because the permission letter came late from police. Secondly, there’s a parliamentary engagement particularly with female MPs in Uganda. The third area which plan on working; is to visit the orphans, widowers and communities where these women were murdered..."

The protest comes on the backdrop of several killings of women in the country over the last year. Records show that 42 women have been murdered in the last one year.

The women activists are also demanding investigations into the killings. Ambassador Rivoal said when women are killed, they don't attract as much attention as men. She says that she joined the march to make a statement that women's lives matter. She applauded the police for permitting the protest. Rivoal, however, condemned the unnecessary use of force by security agencies.

"I would like to thank the Ugandan police for allowing that march. It shows that they also care about the women being murdered and am sure they are doing their best to find the culprits and the murders. Of course we condemn the use of violence which is not necessary, we’ll do it here, we’ll do it anywhere including in our own countries. The police are here to protect the people, they’re to be respected, they’re role models for society and as such they have the responsibility to behave in the very best possible way. We condemn violence anywhere including in my own country." she said.

Ambassador Malac said women should be provided security and given confidence that the killings will stop.

"Women deserve confidence as they walk around streets doing their businesses. We are really happy to be here with all these young and wonderful women and hopefully we will continue to do more to push for an end to violence against women," Malac said.

Richard Ssewakiryanga, the executive director Uganda NGO Forum, said the march was significant because it brought to the fore, the issue of violence against women.

Then after tribal leaders stand down, there will be chance to put in place a government that will be for & by the people!

If tribal leaders don't want to stand down, then after UNITY throws Musevni out, independent tribal states must be formed immediately!

33 years of waste, division, spectating distruction of the country...must be brought to an end, if Ugandans want a start to Nation or Tribal building!

Has Museveni not made it clear it's him & him alone to rule forever & why would he give chance to decency to women or men in Uganda in a country he considers his?
Report to administrator
-3 #2 gatashimana 2018-06-30 22:20
Hundreds attend million march? Oxymoron headline. Is it normal for foreign dignitaries like ambassadors to attend such local political events?

Or is it civic? It would have been embarrassing if Mr. Kayihura had tear gassed them. Can you imagine the international headlines!!
Report to administrator
+3 #3 Goodman 2018-07-01 00:13
The people are sick and tied of M7's government.

Ugandan's will have peace the day M7 steps down. Look at what is been going on at Nalufenya, he pretends that he doesn't know and puts all the blame on Kayihura.

Kayihura was reporting and taking orders from M7 the command in chief. Therefore, he M7 is also a big problem behind a lot of what is happening in Uganda.
Report to administrator
+4 #4 Lysol 2018-07-01 00:25
Slowly and surely the rope is beginning to tighten around the neck of the corrupt and brutal regime.

It's just a matter of time now.
Report to administrator
+3 #5 Jama 2018-07-01 02:35
Self mantainance on power is more important than the people's security to a man who came to power through bloodshed.

what's important to him is family first, tribe and those who are alienated to him.

Ugandan's will have peace the day M7 steps down. Look at what is been going on at Nalufenya, he pretends that he doesn't know and puts all the blame on Kayihura.

Kayihura was reporting and taking orders from M7 the command in chief. Therefore, he M7 is also a big problem behind a lot of what is happening in Uganda.

It's only Ugandans, but in UNITY, who can come out to block Museveni & force him to step down!

UNITY that will force Musevnei out will give Ugandans chance to think of what they want, especieally as there is no armed war!

For once UNITY throws Musevnei out, parliament will work for Ugandans & help put in place the kind of governance they want - this is the duty of Speaker of the House!
Report to administrator
-1 #7 Akot 2018-07-01 18:29
Jama, agreed, yet,

Uganda, formed by tribal lands joining in belongs to Ugandans & not to Museveni!

Tribal leaders must by now know they are tangles at Ugandans' heels: Ugandans won't go against their tribal leaders, even when these are so heartless-unconcerned about how people live in Museveni's tribalistic system!

UNITY of our people & Museveni will be out even when there is no common opposition leader: the Speaker of Parliament will have the responsibility to see to it mps put the country on feet just as Ugandans want, after Musevnei is thrown out in UNITY, especially as there is no alternative leader to take over!

Ugandans have no right to let Museveni go on: it's the future of their children!

Kampala has a capable Mayor in office who will need parliament too, the moment Museveni is out!
Report to administrator
-1 #8 Lakwena 2018-07-02 11:44
Quoting gatashimana:

Hundreds attend million march? Oxymoron headline. Is it normal for foreign dignitaries like ambassadors to attend such local political events?

Or is it civic? It would have been embarrassing if Mr. Kayihura had tear gassed them. Can you imagine the international headlines!!

But Gatashimana, it was the Diplomats participation the more reason the match was allowed with no police disruption or foolishness if you wish.

Besides, to his credit; IGP Okoth is not a thug like Gen Al Kayihura.

In other words, by appealing to the international communities participation, the organizers were strategic, civil and hence smarter.

How it becomes oxymoron headline, defeats the social and public morality herein.
Report to administrator