Government is considering electrifying the fence of the newly constructed Entebbe expressway to stop vandalism of road furniture, President Yoweri Museveni has said.

While commissioning the Kampala-Entebbe expressway at Mpala toll station in Wakiso district on Friday evening, Museveni said electrifying the fence will help minimise the burden of maintaining vandalised road furniture. The function was also graced by Wang Yang, chairman of the Chinese People's Political Consultative Conference.

Museveni said cameras will also be installed to ease monitoring of activities along the road. The equipment usually vandalised according to the Uganda National Roads Authority (Unra) includes guard rails and road signs. 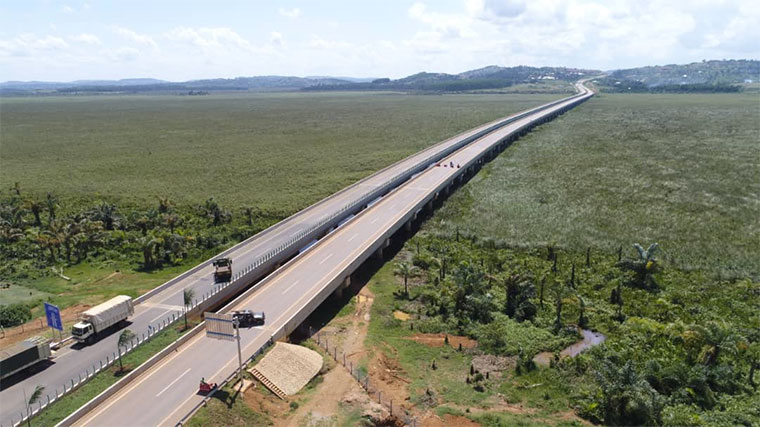 The tolling section, according to Unra, measures 25km running from Busega through Kajjansi to Abayita Ababiri (Mpala).

Gen Edward Katumba Wamala, the state Minister for Works, said the toll fee will be fixed after enactment of the Road Toll Bill. Road tolling is a form of road pricing on either a public or private roadway, typically implemented to help recover the cost of road construction and maintenance.

Wang is optimistic that the road will boost industrialisation in Uganda since it would reduce time goods spend in transit from Entebbe to Kampala. Wang said with the expressway, the time from Entebbe airport to Kampala will be reduced from the current two hours to 45 minutes.

The 49.56km highway connects Kampala city to Entebbe International Airport was constructed with a loan of up to $476 million (about Shs 1.8 trillion) from the Exim Bank of China constructed by the China Communication Construction Company (CCCC).

Meanwhile, motorcyclists, cyclists and pedestrians will not be allowed to use the newly constructed road when it is officially opened.

+3 #1 gwok 2018-06-18 00:14
The idea of toll roads is not new and should be welcomed but our endemic corruption inflates cost of constructing such roads, which eventually gets passed onto the public.

We have seen that [corruption] with hydro-electric power stations too.
Report to administrator
+1 #2 Lysol 2018-06-18 00:31
Electrifying the expressway is non-starter. It will environmental hazard, as many animals and human will be electrocuted.

Environmental Activists will sue the regime.
Report to administrator
0 #3 Jethro Tull 2018-06-18 04:10
There has to be better solutions than electrifying the freeway, i see unintended consequences & a flood of law suits. I pray that sober minds prevail.
Report to administrator
+2 #4 Keith Flowers 2018-06-18 06:32
The figure quoted as being higher than the average cost needs to looked at carefully as this 25km stretch of road has alot of bridges and underpasses. one section of the road is elevated for 1.5 km as it crosses a wetland.

Therefore this road would be more expensive than a standard road.

I think in this case the Contractor and the Government should be congratualated for a job well done.
thank you
Report to administrator
+2 #5 miki 2018-06-18 08:56
Don't electrify fences and sign posts. Instead pass and put in place a very strong law aimed at protecting all public assets and goods from both vandals and thieves.

That law should be stringent especially on the parties that buy and use any stolen assets.

Their assets - whether homes or business - should be auctioned off and the proceeds go towards replacing the public assets and also paying off the whistle blowers who report them.

This would be a strong deterrent and better alternative to electrifying things which may result into un-intended victims being electrocuted.
Report to administrator
+1 #6 Ronald Mugisha 2018-06-18 14:41
Keith and many others defending the cost of the turnnel, be reminded that Ugandans are not fools. $9 million per km is a a lot of money.

This project is just shot of catching up with the cost of constructing the channel turnel , an underwater underpass connecting Britain and France.

We should all condemn such abuse of public resources because its our children who will pay in the end.
Report to administrator
+1 #7 Lakwena 2018-06-18 14:49
In other words, Mr. M7 is a daydreamer. Beside paying the road toll, who will the power bill?

And suppose there is a road accident and the vehicle/s involved got into contact with the electric fence, who is to blame for electrocution of passengers and/or driver/s?