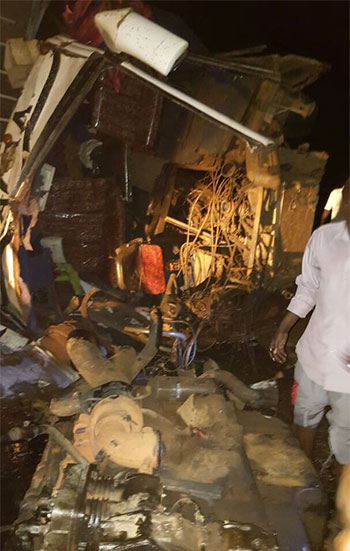 The accident claimed 22 lives and 15 others nursing injuries. The 22 were killed when a Kampala bound bus registration number UAK 562L hit the rear of a tractor before colliding with an oncoming truck in Nanda village, 12 kilometres from Karuma township in Mutunda sub-county.

Gaagaa manager Umar Babu told URN today, Monday that the families of the deceased have been given Shs 3 million each to cater for burial arrangements. He said the money has already been handed to the families.

He made the revelation as Christians gathered at Akii Bua stadium in Lira town for a requiem mass organized by Lira Elders Fellowship, an association that brings together all the religious leaders in the region. The company also mobilised about Shs 17 million to support the families of the injured thereafter. Babu says they are closely monitoring those admitted at Nsambya and Mulago hospitals.

"We  contribute normally when such an incident happens. We contribute some bit of money for burial and then afterwards we sit with them when they are settled. Most people [families] have picked the money. We're giving to 20 [families] the other two [also killed in the accident] were not with us. The other two, one was trailer driver and the other one was a truck driver," Babu said.
Lira Municipality member of parliament, Jimmy Akena, welcomed the decision by the Gaagaa describing it as a positive gesture. He, however, cautioned them against making a return journey and presenting mechanically dangerous buses.

The president, through his State House comptroller Lucy Nakyobe, visited the injured, six in Mulago hospital, and seven in Nsambya hospital to deliver the cash.

While handing over the cash, Nakyobe told the injured that it was in fulfilment of the president's promise to support them financially. After receiving the monies, the injured or their caregivers signed an acknowledgement note.

In other words, dying is part of living: death bonanza for the living and the casket makers.
Report to administrator
+1 #3 Kigongo Ssentongo 2018-05-29 08:54
Quoting Odessa Sekitte:

Its our culture Odessa to support each other in times of tragedy.

Maybe you have more suggestions on how we as Ugandans can support each other during such times. Bring on the suggestions.
Report to administrator
+1 #4 Wazza 2018-05-29 10:40
Quoting Odessa Sekitte:

My friend, this country is annoyingly unique. When did habit of distributing money for any tragedy or crisis begin?

The issue is traffice safety and how to prevent the tragedy from recurring.

For the company and government to rush out with cash (yes I understand money is needed!) diminishes the value of the deceased and their famiy. On the face of it, looks like uncaring!
Report to administrator