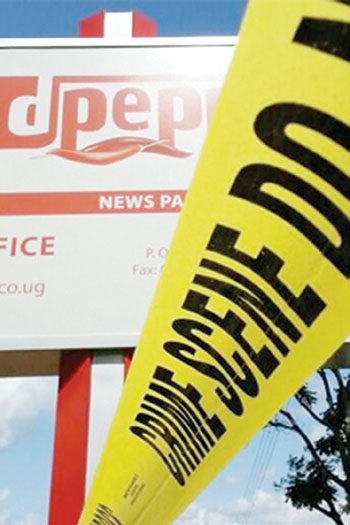 Police yesterday preferred unprecedented charges of treason, a capital offence punishable by death, against eight Red Pepper journalists who were arrested on Tuesday.

One of the company’s lawyers, Dickens Byamukama, said that the charges preferred against the eight were read to them at the Red Pepper offices in Namanve.

“According to the charge and caution statement read to them, they will be charged with offensive communication, disturbing the peace of President Museveni, Salim Saleh and Security Minister Henry Tumukunde. The main charge preferred against them is treason,” Byamukama told Uganda Radio Network (URN).

Rights organisations and media freedom defenders have asked the government to immedately release the journalists.
On  Tuesday, the Counter Terrorism Unit (CTU) of the Uganda Police led by the Kampala Metropolitan commander, Frank Mwesigwa, besieged the Red Pepper offices.

Less than a day after the raid which saw CTU confiscating phones and computers, police on Wednesday returned and picked up editors who were taken for interrogation almost 70km away at Nalufenya police station, a facility which became notorious when reports of it being a torture centre emerged.

The publications chief executive officer (Richard Tusiime); three editors (Richard Kintu, Ben Byarabaha and Tumusiime Francis Tinywana) and four other senior managers were detained. The arrests were made in relation to a story which ran on Monday, November 20.

With the charges preferred being criminal in nature, it remains unknown when they will be brought to court. State prosecutors attached to the Directorate of Public Prosecutions (DPP) are on strike and the Judiciary has suspended all criminal sessions until further notice.

Police spokesman Emilian Kayima told The Observer yesterday he was not sure when the eight would be arraigned in court. He said that their files have been sent to the DPP.

“They can only come to court when their case file has been sanctioned by the DPP. We needed the DPP to peruse the files and once that guidance comes, then we will see a way forward,” Kayima said.

Under Uganda’s Constitution, a suspect must be charged in court within 48 hours of being arrested. The US-based Committtee to Protect Journalists (CPJ) yesterday released a statement noting that the raid and arrests were aimed at intimidating journalists into silence.  Angela Quinatal, CPJ Africa programme cordinator, said there is no reason for government to detain the scribes.

“Reporting on politics is not a crime. Journalists in Uganda must be able to report without fear of retaliation. We call on the Ugandan authorities to immediately release the Red Pepper editors and managers,” said Quintal.

Journalists under the Uganda Human Rights Network for Journalists (HRNJ) visited the beseiged Red Pepper premises.
Robert Ssempala, the HRNJ national coordinator, condemned the police raid and promised that they would stand in solidarity with their colleagues.

“To the directors, editors and all the Red Pepper staff stand firm, we are together in this. We need to all stand together against this systematic attack,” Ssempala said.

Another HRNJ member and proprietor of The Investigator, an online news website, wondered why police took away all the computers without considering the damage done.

“All media houses have their sources …, a lot you don’t know happened. So let’s not judge. Allow us to be suspects until we are proven guilty,” said Stanley Ndawula, who was also recently arrested and charged in connection with his work.

“Whatever they have toiled for all this time has been dismantled and taken away all in the name of looking for evidence over one story published in one day.”

Ministry of Foreign Affairs maintains that the published story was a reproduction of a malicious report in a Rwandan online publication, Rushyashya, about Uganda-Rwanda relations.

Ministry PS, ambassador Patrick Mugoya, described the story as “mischievous at best, irresponsible at worst and meant to sow discord between our two nations.”

0 #1 Apollo 2017-11-24 14:44
Redpepper Publications is the first big media house to suffer the consequences of riding on the back of a deadly tiger, with false hope that it will only eat smaller animals.

Every media house should have condemned the illegal detention center at Nalufenya from the day it was set up.

Having disassociated itself from illegal 'safe houses' and unable to bend Uganda Prisons Service into participating in illegal detentions, the NRM State created Nalufenya detention center. Many suspected ADF fighters and collaborators have not survived 6 months after release from this facility; they died shortly after release.

This partly explains why this deadly place has not attracted much condemnation from human rights crusaders, especially media houses. Now the Redpepper Directors are 'honored guests' at this dangerous facility.