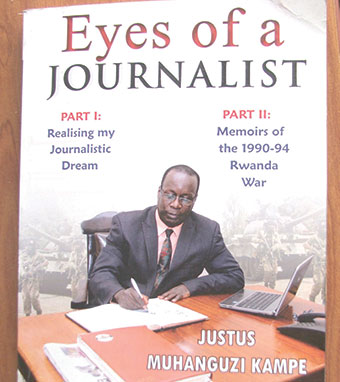 Journalist Justus Muhanguzi has reported a case to police over threats on his life after he launched a book with his account of what happened during the Rwandan 1994 genocide.

Muhanguzi is one of the Ugandan journalists who covered the war and subsequent genocide in Rwanda as it happened.

He was writing for New Vision newspaper at the time but his book on what he says is what he saw has raised eyebrows.

A very unhappy Kigali has declared that the book carries falsehoods. On Tuesday, October 17, Muhanguzi recorded a case number SD 60/16/10/2017 at Kira Road police station in Kampala. He told the police that his life is being threatened, and he is receiving calls from strange people warning him over the book.

Asan Kasingye, Uganda police spokesperson, told The Observer on Thursday, October 26 that he knows Muhanguzi as an employee of Uganda Human Rights Commission, and not as journalist.

He added, however, that since he has reported a case of threats to his life, “it must be investigated and the truth will come out.”

“I would be surprised if it was not investigated. We’ll approach it with an open mind and see the truth behind it,” Kasingye said.

Barely two weeks ago, on October 4, 2017, Muhanguzi filed a complaint with the Uganda Human Rights Commission noting threats from unknown people opposed to his book.

Muhanguzi, whose book is titled Eyes of a Journalist, told The Observer last week that he was once invited to the Rwandan high commission in Kampala and told not to launch the book because it contained “inaccuracies.”

The launch of the book was initially slated for April 6, 2017 at Hotel Africana. But he received a call from police spokesperson Asan Kasingye a day before that date telling him that Inspector General of Police Kale Kayihura wanted to see him.

When he went to police headquarters for that meeting, Muhanguzi was instead accosted by an individual believed to be a Kigali agent who got him to go to the Rwandese mission.

Kasingye recently told the press that there was nothing sinister about him linking Muhanguzi to the Rwandan high commission.

Muhanguzi said when he reached Kasingye’s office, he found a one Ismail Baguma from the Rwandan high commission who told him that they just wanted “the book updated; that they were ready to incur costs for republishing it.”

Muhanguzi said he was forced to stop the book launch at Hotel Africana. The biggest contention, Muhanguzi added, is that Kigali feels there are ‘falsehoods’ as regards the account of the death of Maj Gen Fred Rwigyema, the charismatic founding leader of Rwanda Patriotic Front (RPF) whose war defeated Juvenal Habyarmima’s government with Gen Paul

Kagame eventually becoming president of that country. In a statement to journalists, the Rwandan mission said Muhanguzi’s allegations were unfounded.

“The Rwandan High Commission invited Mr Muhanguzi to discuss inaccuracies and conspiracy theories contained in a series of articles he had written on the Rwanda Patriotic Front (RPF) and genocide against Tutsi,” the statement read.

“The allegations that Mr Muhanguzi was threatened while at the high commission are not true.”

But in mid-September, Muhanguzi said, he took advantage of the chaos surrounding the presidential age limit amendment and launched his book. Almost immediately, he started receiving death threats.