Below is an unabridged response from President Yoweri Museveni to Kyadondo East MP, Robert Kyagulanyi aka Bobi Wine in regards to the age limit amendment and governance.

Kyagulanyi had called for the retirement of President Museveni because according to him the country was facing 21st problems that need 21st solution and can be implemented by the 21st generation.

Again, I congratulate our young friend, the Hon. Kyagulanyi, Bobie Wine, for his recent elections in Kyaddondo North.

I also notice that he is quite active in sending out messages about what he thinks should be done in our country, Uganda. He had issued a statement some time ago in response to my article of 16th July, 2017 in the New Vision Newspaper.

When we were at Makerere, he, again, was part of the group that tried to hijack the Mzee Mandela Memorial Day into an anti-NRM, anti-Museveni forum. I ignored them and focussed on Mzee Mandela and on Africa. I, nevertheless, noticed the indisciplined, uninformed but arrogant way in which that group was conducting themselves.

The Security Services have now shown me a statement ascribed to the Hon. Bobie Wine when the Age Limit Debate started recently. It is very good when the opponents of the NRM put in writing their views.

In his latest statement, the Hon. Bobie Wine, referring to the NRM Caucus position on the issue of Age Limit, he shamelessly wrote: “They did this at a time when our Nation has been bleeding for the past 31 years. Our country’s former glory is all gone.”

The Hon. Bobi Wine, you are either uninformed or you are a liar, a characteristic you so liberally apply to me. Where was the “former glory” of our country when people had no salt, no sugar, no paraffin, no security of life or property?

It is, actually, only in the last 31 years, especially after 2007 when we finally defeated the ADF in the Semliki valley, that Uganda has had peace for the first time in the last 500 years. I have made this statement before and I, hereby, repeat if for the benefit of the Bobie Wines.

Before colonialism, we had endless tribal wars; during colonialism, after alot of bleeding, there was, eventually, peace in much of Uganda, but not in Karamoja; after colonialism, there was chaos and collapse until the NRM restored stability to the whole country about 10 years ago, after we defeated ADF, Kony etc and disarmed the Karimojong.

It is true that there has been a spate of murders and other crimes some of whose perpetrators have not been brought to book. However, crime is not the same as war and terrorism – both being the big problems the UPDF has defeated. Secondly, some of the murderers of the young women have been arrested and charged in Court.

1. Nansana: 10 women were killed. 16 Suspects were arrested and charged in Court;

2. Kawempe: 1 woman was killed. 2 Suspects were arrested and charged in Court;

3. Entebbe: 11 women were killed. 13 Suspects were arrested and charged in Court;

4. Wakiso Bulago: 1 woman was killed. 2 Suspects were arrested and charged in Court.

Then, he lunges into social and economic issues. He writes: “Our children face an uncertain future where unemployment is the order of the day. The National Debt has turned us into slaves and the gun has become master.”

However, for these sectors to employ more people, produce more goods and services, pay more taxes, they need better infrastructure (electricity, roads, the railway, the ICT backbone etc.) Why? It is because better and cheaper electricity will mean lower costs for the producers in the four sectors. Lower costs will mean better profits for companies. Better profits for companies will attract more companies, thereby creating more jobs and producing more goods and services.

Does the Hon. Kyagulanyi agree with this diagnosis and prescription or does he not? If he does not agree, how else will he create jobs? Apart from attracting investors with their own money to invest in the four sectors, we also empower our own youth, with Government money, to enter into the four sectors. Kyagulanyi was in one of the sectors – music.

Entertainment is part of the services sector. The funds that have been set up, if enhanced, can enable our people to enter into any of these sectors. The other sector is Public Service. This employs 415,000 persons. It is abit bloated, it could do with less.

What is amazing is the opposition, to which Bobi Wine apparently belongs, is always opposing new industries (e.g. sugar in Amuru, they delayed Bujagali dam in the 6th Parliament (1999) etc.)

Recently, they have been opposing the Land Amendment Bill which aims at, on the one hand, quickening the process of getting land on which to build the very infrastructure (especially the roads, the railway and the electricity) that is crucial for attracting industries, services companies etc that are necessary for solving the unemployment problem and, on the other hand, stops the squandering of Government money in fictitious compensations.

How can you undermine the base of the industries and service companies that helps you to create jobs and then you claim to talk about jobs? Opposing the Land Amendment Bill also means that the opposition, to which Bobie Wine belongs, is in cahoots with the corrupt Government officials or the greedy private citizens who use land compensation to Kwaaya (loot) the Government.

In my radio talk shows recently, I quoted two examples. An example in Ntungamo, where the market price of land is between Shs.13m to Shs. 20m per hectare, but where one of the people demanded Shs.1.5bn per acre!!

The East African electricity line project was delayed for 5 years!! In Kamwengye, the very important Nyakahita-Kazo-Ibanda-Kamwengye-Fort Portal Road (209.2 kms long), at a total cost of Shs.425bn, had to be diverted because one greedy claimant demanded Shs.1.2bn for a quarter of an acre when the fair compensation was only Shs.89m. This means that the Government will stop tarmacking roads, building power lines because of this kwaaya (looting) by the collusion of Government officials.

The opposition do not only oppose the infrastructure projects. They also oppose factories like the one of Amuru etc. How will they create jobs?

Then Bobie Wine talks of the Public Debt that has made “us slaves”. False, Mr. Bobie Wine. True, some of the debts are contracted carelessly by Civil Servants. However, two things. 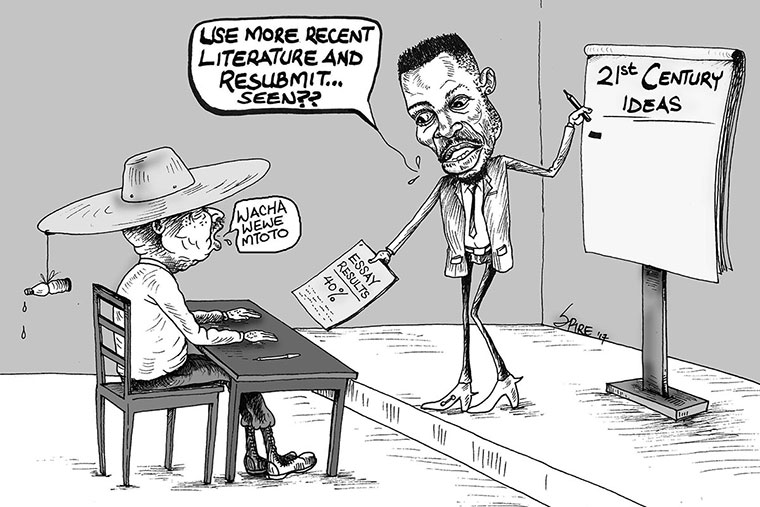 First, much of the debt has helped us to build roads – that is why Bobie Wine is able to zoom around the country in his vehicle with ease. Secondly, we are careful with the level of borrowing. When you include the borrowing for the Standard Gauge Railway and all the other projects, the debt level will not exceed 41.7% nominal debt to GDP. The danger level is 50% of GDP and we are far away from that.

Then Bobie Wine goes on to talk about the “Sale of Public Assets” – probably referring to privatization. Hon. Bobie Wine, this was good for the economy. It injected alot of efficiency in the economy. Look at transport, for instance.

There were two Government Transport Companies: UTC and People’s Bus. They were dissolved. What has happened in the Transport Sector? Alot of private Bus companies have come up, alot of taxis, boda boda etc. Privatization created economic space for the private sector in the transport sector. The same for the hotels, education (allowing private schools), health (allowing private hospitals).

We cannot sustainably create jobs if we do not create more market space for our entrepreneurs. To see young people who are oblivious of this issue but in positions of leadership is not good for the country. We had a Pan-Africanist stand when we were in our early twenties. That is how we were able to push Uganda so far and for so long.

The Age Limit Debate is starting. I will give my views at the right time. What is not acceptable, however, is intimidation and violence. Those are fascist methods. Let everybody speak his mind freely and without threats. We shall confront and defeat anybody who intimidates or threatens our peace.

Given your status and engagements, I am so impressed that you managed to give your thoughts on this. Had it been like this always, we would be on the way to glory.

Frankly speaking we are not there! While I would appreciate that you borrow from your past experiences to inform us of your achievements, I also think that you need to realise that we are on a different wavelength as of now.

With your country almost 70% youth, you need to change your tactics. Because all you say for now doesnt matter much.

We need a future, we need to run and compete even with our neighbours, to work, accountability, we dont need to be slaves to your military at such a time.

We need you to appreciate that someone else can &indeed will. We need peace, we utilise our resources and get better.

And I am sure you know we can with your advice even if you were not a president. You cant be our Jajja when THEY are killing us! Just for once listen!
Report to administrator
123