Unidentified people have pasted posters on several streets in Kampala denouncing the move to lift the presidential age limit from the Constitution.

This morning, Kampala residents woke up to the anti-presidential age limit removal posters plastered on pavements, walls and electricity polls among others, setting a new tactic.

It is not yet clear who could have planted the posters overnight, but the spread of the posters is testament to a sizeable group that worked for hours in many places.

The poster has a photograph of President Yoweri Museveni, clad in a deep blue suit with his trademark hat and yellow tie taking the presidential oath while holding a Bible in his raised right hand. 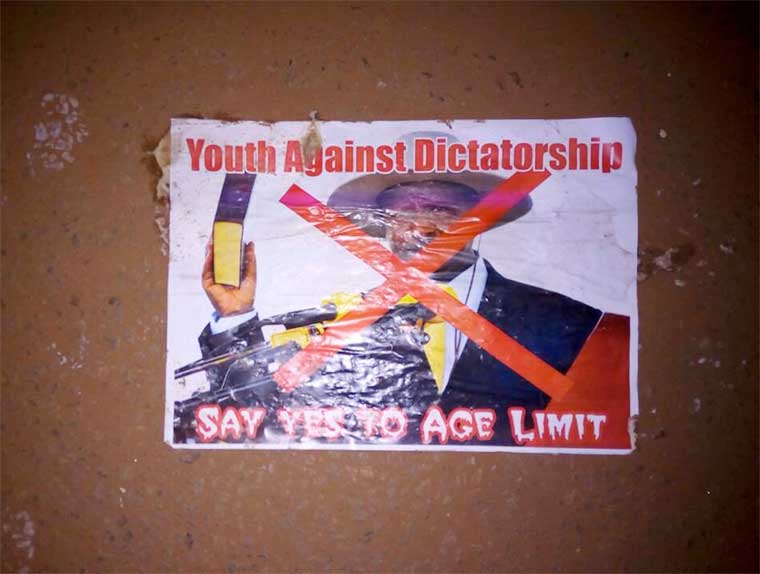 While taking the presidential oath, the president swears to, among other things, uphold and defend the Constitution. Scores of school children and people commuting to work could be seen reading and debating the posters. Some of the areas where the posters have been pasted are Kamwokya, Mulago, Wandegeya and the City Centre.

Ever since reports filtered in that the government has gazetted the Constitution (Amendment) Bill that contains an amendment of Article 102(b) of the Constitution that pegs the upper presidential age limit at 75 years, an acrimonious debate ensued between those for and against.

As it stands, President Museveni, aged 73 years now, would be ineligible to stand in the 2021 presidential elections because he would be above 75 years, a situation some of his supporters do not want.

Immediately, it emerged that there could be an attempt to remove the presidential age limit from the Constitution, those on opposing sides started using the mainstream media, social media, telephones and emails to reach out to members of parliament who are expected to debate the amendments.

Both sides have also been reaching out to members of the general public via social media, emails and text messages amongst others. When contacted for a comment, Makerere University political historian, Prof Mwambutsya Ndebesa, says pasting of the posters is indicative of the extent to which, those for and against the lifting of the presidential age limit are willing to go.

Prof Ndebesa says anything that happens to Article 102(b) would constitute a big political turning point of the last three decades, adding that its removal, if at all, will reverberate for decades ahead.

Using the analogy of throwing a stone in the bush to see what may come out, Prof Ndebesa, says the powers that be most likely want to gauge public opinion on the issue in order to determine whether or not to amend the article.

According to Prof Ndebesa, President Museveni should come out clean and state whether he is personally interested in another term or not, adding that hiding behind what his party decides or what the Constitution says is devious.

Prof Ndebesa argues that claiming to go by the Constitution, especially when amended, smacks of double standards, adding that the proper way is to defend the Constitution as is.

Speaker of Parliament Rebecca Kadaga yesterday stopped MPs from debating the issue saying no bill to that effect has been tabled by government yet.

The NRM machinery, police, UPDF and all spy agencies have spies and informers all over the place.

These people include boda boda riders who would have informed police and the posters would have been arrested henceforth. Don't be duped by the mafia outfit masquarading as government.

David Cameron intimated that if the money stolen from Uganda in the past 30 years had been stolen from the UK, the UK would have ceased to exist.

I join those who are up to the fight .