As the push to amend the Constitution to, among other things, remove the 75-years age limit for presidential candidates gains traction, its hitherto timid supporters are becoming bolder and louder in their support.

Kassanda South MP SIMEO MUWANGA NSUBUGA is part of a group that has been quietly mobilising NRM MPs to support the deletion of Article 102 (b) to allow President Museveni seek re-election in 2021 after clocking the mandatory 75 years age limit.

In a July 10 interview with Sadab Kitatta Kaaya, the former policeman explained why he thinks the Constitution must be amended to allow President Museveni  stay on. Below are excerpts.

Rumour has it that you are among MPs pushing for the amendment of Article 102(b) of the Constitution to remove the age-limit?

When the CRC is in place, members of the public will take their views [there] and the minister will present those views to parliament. 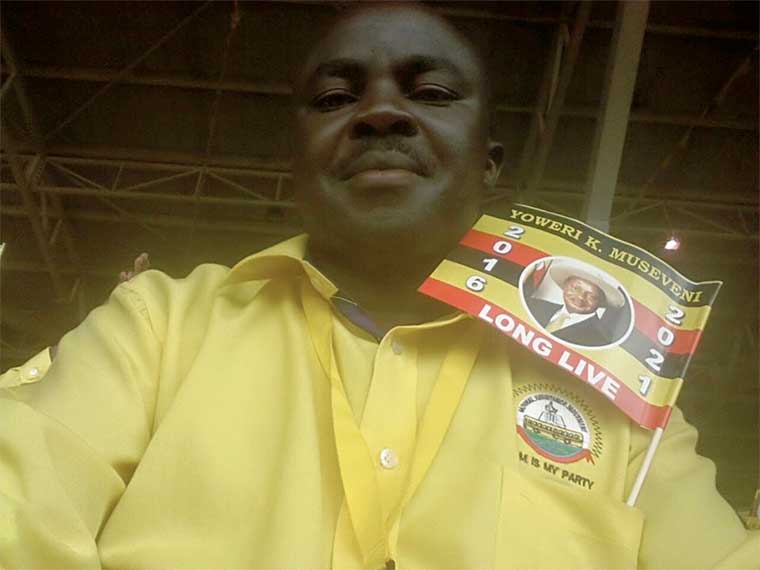 As that process goes on, nothing stops MPs from networking and mobilising themselves, especially within NRM. When you read the Constitution, Article 259(1) provides for the amendment of the Constitution at any time, at any stage.

The framers of the Constitution were so wise that they indicated a series of articles that can be amended by parliament and those which can be amended through a referendum. Article 102(b) is among articles which parliament can amend.

What is your interest in having this article amended? Are you looking at the person of President Museveni?

No, I don’t know why you are looking at it that way, but we need to look at the history of this country. Where have we come from? We have [gone through years of] turmoil, we had a president who ruled for two months, etc.

But for the last 31 years, this country has been stable. It is a question of stability and the progress we have achieved [under Museveni]. We are not talking from zero; we are talking [about] where the country has reached. Now you can drive from Kampala to Gulu to Kisoro to Bundibugyo on tarmac.

Secondly, I come from Kassanda, which was part of Luweero Triangle. In 1980, I was a grown-up child. We suffered at the hands of the Uganda National Liberation Army [UNLA]. Soldiers would come to our village and order us to chase chicken for them. I was about nine years old and witnessed a woman being raped in the neighbourhood by UNLA soldiers. Seven soldiers took turns on her and she was taken to hospital.
We say never and never again to bad [governance].

When you look at the development [and] stability of the country now, no single village in this country is in the hands of rebels.

Unless the person in charge of this country says he is no longer capable, for me as Simeo Nsubuga, I don’t see why we should limit him because of his age.
If he is still capable, let us give him the opportunity to continue leading us.

So, that means your push is targeting only President Museveni?

Yes, I agree with you, but it can be any other person. If somebody is capable of ruling the country, why should he/she be limited by their age? Let me give you an example, look at a country like Malawi or Zambia.

They have a constitution, they have changed leaders, but do they have any developments that have come out of that? A country like Angola has had one president for the last 30 years or so but look at their level of development.

I have had a chance to work in Somalia and South Sudan. I have seen how unstable a country can be if you start playing around, changing leaders for the sake of changing leadership. As long as President Museveni is still capable of steering the country to greater heights, let us leave it to the people to decide during elections.

I understand your group has been working with some senior minister since the private member’s bill brought by Robert Kafeero Ssekitooleko (Nakifuma) to amend the Constitution last September collapsed.

That is allowed. Even in military science, you have to assemble your troops when you are preparing for battle. You have to be ready. There is nothing wrong with doing underground work.

That is not true. That will be decided by the NRM caucus leadership but if they find me more capable, I don’t have any problem. I am a good mobiliser and also good at networking.

What inspired you to begin these networking meetings to push for amending the Constitution to favour a single person?

We have to be very sincere [and] look at where this country has come from, where it has reached and where it is going. We should not change leaders for the sake of it.

Your reasoning suggests that you are keeping your eyes away from the role of institutions and focussed more on an individual. Why do you think that only Museveni is responsible for the stability and development of this country?

Like which institution? Where were these institutions before 1986? They were not there. An institution like the army; UNLA soldiers were abusing the people. I have told you how they raped a woman as I watched.

The person who has managed to build all these institutions is Museveni. If he has built the institutions, which have ensured that the country is stable, why should he be denied a chance to continue leading the country?

Do you mean if he is out of power, the institutions will not work?

They will but at the moment he is still around. By the way, he has not indicated that he wants to continue. It is us, cadres telling him there is a provision in the Constitution which talks about amending the Constitution.

I trust The Observer and I want you to interview people like Col Dr Kizza Besigye, Maj Gen Mugisha Muntu, Maj Gen Kahinda Otafiire, Gen David Sejusa, etc because during the Constituent Assembly, I used to sit in the gallery during the making of the Constitution.

Ask them why they put the provision for amending the Constitution. They knew that a need would arise. When you read Article 260, it clearly states which articles can be amended by parliament and those which can be handled through a referendum.

What we are doing right now is voluntarism in the spirit of NRM because our man is still capable of steering the country.

Have you discussed this with him?

That will be in the caucus, for now, it is still amongst ourselves, MPs and some ministers and generals who are MPs. Just say MPs and mostly, NRM.

Your project has ignited public debate and some activists are already mobilising against it. How are you addressing this negativity?

Having worked in Kampala as a senior police officer before I went to represent the people of Kassanda South, I know the views from Kampala are different from those in rural areas.

Where I come from, people are satisfied with President Museveni’s leadership and they want him to continue. People in rural areas look at what we have achieved. Recently, I drove from Kalamba along Mityana – Mubende highway to Misozi, trying to connect to Maddu in Gomba [district]. Between Kalamba and Misozi, I counted 20 houses with coloured iron roofs and solar panels.

In the 1990s, you couldn’t see such houses. So, people in rural areas look at development. One important thing I have observed is, we have a big challenge with the youths.

As NRM, and as government, we need to get employment for the youths. When you talk to youths of 20 to 30 years, they don’t appreciate the achievements we have attained over the past 31 years, they don’t know where this country has come from, they don’t even know that at one time, we used to line up for sugar, salt, soap, etc.

They don’t know that at one time, the journey from Mubende to Kampala would take two days. We need to do a lot of explaining to the youths so that they know where the country has come from and where it is going.

+7 #1 NAKALWASIRA DENISE 2017-07-12 09:04
The problem Uganda is facing now, is the Simeo Nsubugas who are educated but confusing the masses with their selfish interests.

He blames the youth not knowing that the way he sees the past govts is how they are seeing his govt.

He had the capacity to line up for sugar but its availability when ur unemployed is not helpful coz u cannot get it.

How can such an educated man tag the development of Uganda to only the president in that if he is not around then it stops.

Reasoning now has no place in NRM when it comes to M7 and his personal vendetta and life presidency.
Report to administrator
+6 #3 Lakwena 2017-07-12 10:37
Unless he borrowed his head and stomach (myopic greed) from M7, Simeo Nsubuga must get real.

Since 1981, it is M7 behind all the turmoils, which spread like wildfire: from Luweero to Northern Uganda, and even caused a genocide in Rwanda and a reverse genocide in DR Congo (1990-2003).

M7's driven turmoil did not spare Southern Sudan (2013), which caused additional genocide in Bor (Dr. Garangs Hometown that was leveled to the ground)

As a result of all these; today Ugandans continue to suffer the influx of refugees from all the 4 corners of the country.

Who was behind the turmoil and massacre in Kasese in 2016, was it Dr. Besigye, Tito Lutwa, Obote or Amin?

In other words except criminals, who wants such an old man/leader without a future, to continue leading the country into more turmoils, in order to satisfy his insatiable greed?
Report to administrator
+5 #4 Lakwena 2017-07-12 11:18
The truth must be told: Under the UNLA/F (1979-80), M7 was a soldier and the Minister of Defense, who was capable of commandeering Military uniform and hardware for the Luweero subversion.

Therefore when M7/NRA entered the bushes of Luweero in 1981, at 9, how sure was Nsubuga that; the rapes and pillage he witnessed, were not actually done by the NRA, as war propaganda to demonize Obote and the UNLF administration?

Maybe Nsubuga should ask Gen Otafiire who blurted it out in Bushenyi, during Prof. Adonia Tiberondwa's funeral; about what mischief they used to do in order to demonize the UNLA and Obote.

In other words, what has Nsubuga got say about M7 declaring on the 26th January 2017 that he does not fight for anybody, nor is he anybody's servant or employee and only helping some people like Nsubuga?
Report to administrator
+3 #5 Waiswa 2017-07-12 14:04
How unfortunate this country called Uganda must be!

To have only one mortal man who is capable of leading out of the 34.5 million!

I expect hon. Semeo Nsubuga to be thinking of how to become president and replace Museveni instead of manouvering how to change the constitution to allow a life Presidency.

I used to think that parliament was a think tank for the country. Hon Nsubuga shows the opposite.He is in parliament to represent Mr M7 and not the people of Kassanda.

I also read his mind. He wants a ministerlal post. He is massaging the ego of the President to get a ministerial job .

Massaging the ego of the leader is the most lucrative commercial activity in this country. Many did it and got to cabinet
Report to administrator
+2 #6 A K Mukasa 2017-07-12 15:57
What the observer forgot to ask this imbecile is whether Uganda would cease to exist if Museveni was to die tomorrow.

A country of almost 40 million but there is only one man who has the necessary wisdom and fortitude to lead it.

That is a vey big indictment. What the media should do is to starve these upstarts the oxygen of publicity.

None of them has given a credible or rational explanation for their mendacious cause. They are extremely dangerous and we should treat them with contempt they deserve.
Report to administrator
0 #7 Museveni hater 2017-07-12 19:19
M7 is the most useless person.