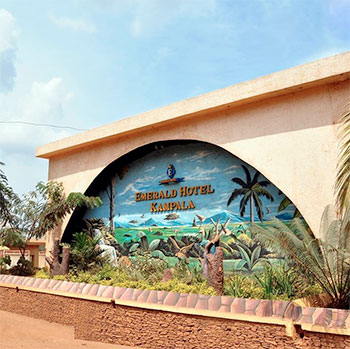 The long-awaited ruling was delivered on Friday, eight years after the case was lodged. Justice Mukasa ordered Shukla to pay Shs 18 billion in damages and vacate Emerald hotel because he fraudulently acquired it.

The judge, who had no kind words for Shukla, said: “There was unjustified enrichment of the fourth defendant [Shumuk properties owned by Shukla] on property and business it had no claim.”

The plaintiffs argued that they built Emerald hotel on plot 3, Semiliki walk in Kampala, registered under the names of Nakityo and Mutebe. However, in September 2005, the plaintiffs got into trouble when they tried to get an apex loan from Bank of Uganda, which attracted an interest rate of 10 per cent per annum.  Barclays asked Emerald to channel its loan application through the bank.

Through their lawyers Benson Tusasirwe and David Kaggwa, the plaintiffs said that though Barclays received the application, its officers didn’t process it. Instead, Barclays advanced Emerald a commercial loan attracting an interest rate of 21 per cent per annum. Consequently, the terms of the first loan of Shs 2.7 billion were set out in the facility letter dated November 4, 2005.

In early 2006, Emerald agreed with Barclays to raise the loan limit for phase one of the project to Shs 3.6 billion. Then, Barclays failed to operationalize the revised arrangement until February 2007. Emerald claimed that despite the agreement, no fresh funds were actually advanced by Barclays.

In August 2007, after completion of phase one with funds got elsewhere, Barclays informed the hotel that the interest accruing on the initial disbursement of Shs 2.7 billion had raised its indebtedness to the bank to Shs 3.6 billion without any fresh funds being advanced.

Thereafter, Karamagi sold the hotel to Shumuk properties, a company owned by Shukla at Shs 22 billion. Shukla first paid Shs 10 billion. In the meantime, Shukla lodged a caveat on the hotel claiming to be the registered proprietor.

In its defense, Barclays through its lawyer Ruth Sebatindira of Ligomarc Advocates, claimed that Emerald obtained three credit facilities from the bank totaling Shs 4.8 billion. Sebatindira argued that Emerald defaulted on its loan repayment obligations, despite several reminders, which led to Barclays to appoint Karamagi and Wamala to recover its money.

But Shukla insisted he was the bonafide purchaser of the hotel. He claimed he bought the property on the open market.

Sebatindira argued that Emerald breached the loan agreement and consequently her client Barclays was entitled to sell the mortgaged property without recourse to court. But Tusasirwe argued that the sale was unlawful because it was done on false documents. Tusasirwe said the appointments of Karamagi and Wamala were void since they never acquired the power to sell.

Tusasirwe pointed out that Wamala’s advert selling Emerald gave a specific date and time of sale as July 16, 2008, yet evidence in court showed that the sale took place on August 15 2008.

“I agree with counsel that the intended advertised sale lapsed on July 16, 2008. As of the date of the agreement of sale nearly a month after, there was no notice of sale, justice demands that the receiver/manager adjoined an advertised sale for such a long time, the same should have been re-advertised,” Justice Mukasa ruled.

The plaintiffs’ lawyers also argued that Shumuk Properties were not independent buyers but a client of Ligomarc advocates, who were also lawyers of Barclays. This was exacerbated by the fact that Karamagi confirmed in court that he is a partner with Ligomarc Advocates, yet he was the receiver of Emerald. “…Such a relationship put the fairness of their discussions in doubt,” the judge pointed out.

Though the agreement for the sale of the hotel provided that the deposit sum was “non-refundable”, evidence showed that Karamagi on June 16, 2009 refunded the Shs 10 billion to Shumuk Properties who accepted the same.

“Refund of the deposit sum was in violation of terms of the sale agreement,” Mukasa said. “Therefore, as the case proceeded, there was no agreement of sale of the suit property to adjudicate on. In the circumstances, I find that the first defendant [Barclays bank] and her agents did not act in good faith and did not obtain a fair market price.”

In 2014, the same court, ordered Shukla to return property worth billions of shillings which had been illegally transferred from Boney Katatumba, the consul of Pakistan. The property included former Backlines house on Colville street in Kampala, Hotel Diplomate [Muyenga] and Katatumba resort island in Kalangala.