When the government launched the National Agricultural Advisory Services (Naads) in 2001, the aim was to provide farmer education through provision of advisory services in order to improve farming practices in rural Uganda.

The programme, which was intended to help rural farmers apply scientific knowledge and research to their agricultural practices, was to be implemented in three phases over a 25-year period. Fifteen years since its launch, BENON HERBERT OLUKA explores how the programme lost its way: -

In early 2009, President Museveni wrote a five-page letter to the then minister for agriculture, Eng. Hilary Onek, decrying what he described as mishandling of the National Agricultural Advisory Services (Naads) programme.

Museveni complained that Naads officials were “scattering resources” to many homesteads, rather than stick to the six-homesteads-per-parish model that he had prescribed for the multibillion-shilling initiative.

Museveni would further castigate the minister for letting his charges to bypass the existing government extension workers and instead hire private advisory service providers to offer the expertise that civil servants would have provided at no additional cost to the state.

“We directed that the Naads programme be implemented by existing government extension workers. Why do you hire other ‘advisory services’ from elsewhere? This is short-hand for stealing,” he noted.

Five days after President Museveni’s missive, a value for money audit report from the Office of the Auditor General leaked. The report showed that nearly 70 per cent of the farmers who had participated in trainings provided by Naads were dissatisfied with the way the programmes were conducted.

“Only 32 per cent of the farmers interviewed expressed satisfaction with the trainings. Although all the advisory service providers meet the minimum requirements, they are not meeting the user satisfaction in terms of quality. There was no evidence that the programme was undertaking any quality analyses,” said the report, compiled after interviewing 600 farmers from 12 randomly-selected districts.

These developments stoked the flames of discontent within the top leadership of government, which eventually consumed Naads as had initially been designed. On June 9, 2014, during Heroes’ day celebrations in Mityana district, President Museveni eventually announced that the government would terminate Naads, sack all extension workers and resurrect it under the leadership of Uganda People’s Defence Forces (UPDF) soldiers.

By the time Museveni decided to pull the plug on Naads, some 10 years before its intended conclusion date, the programme had a mixed report card. A study undertaken in 2013 by the Economic Policy Research Centre (EPRC) revealed that while households that participated in Naads had higher access to extension services, the quality of the services remained a concern.

“No clear evidence of the programme’s impact on the increased use of improved technologies, crop yield and sales by households was observed,” said the study report, titled “The impact of the national agricultural advisory services programme on household production and welfare in Uganda.”

Even without being privy to the results of such studies, some Naads participants such as Julius Manyanga, who hails from the western Uganda district of Kasese, says the government played its cards right when it disbanded the programme.

“They were right because most of the money went to administration, especially salaries,” he told The Observer. “In each sub-county, you could find about four or five staff and yet even their outreach to the farmers was not well done.”

But how did we get to that point?

ORIGINS OF NAADS, MYRIAD OF CHANGES

The Naads programme was established by the Naads Act of 2001 as a decentralised farmer-owned and private-sector-serviced extension system to address constraints of lack of access to agricultural information, knowledge and improved technology among rural farmers.

The overall development objective of Naads, as described in a 2001 World Bank report, was to assist poor farmers to become aware of – and be able to adapt to – improved technology and management practices in their farming enterprises. This would, in turn, enhance their productive efficiency, their economic welfare and the sustainability of farming operations.

However, the government did not even allow the first phase of the Naads programme to run its course. In 2007, as a reporter at The East African newspaper, I got a tip that senior officials in government had mooted a plan to merge Naads with President Museveni’s 2006 campaign plank and pet project, dubbed Bonna Bagaggawale (prosperity for all).

Subsequent investigations revealed that the plan was to transfer supervision of Naads to the ministry of finance, where President Museveni’s younger brother, Gen Caleb Akandwanaho, better known as Salim Saleh, had been appointed as state minister in charge of microfinance.

The document, titled “A strategy to enhance Naads’ contribution to rural development and transformation,” outlined in three chapters the strategic considerations for the services that Naads was offering at the time and outlined plans for the immediate future if the two programmes were merged, as well as budget considerations.

Some nine days after the agriculture ministry submitted its document to Museveni, there was a meeting at State House, Nakasero, which was attended by the president, his then deputy Gilbert Bukenya, as well as the ministers of agriculture and finance and their respective technocrats.

At the meeting, Prof Bukenya made a presentation out of a paper that he had personally prepared. It was titled “Bonna Bagaggawale (Prosperity for all) — Tackling poverty at the household level.”

At the time, Prof Bukenya was a very active proponent of upland rice production and used to move around the country promoting it. Prof Bukenya’s paper was based on seven principles which boiled down to the maxim that “every household must earn a daily income, a periodic income, a long-term income, and also earn income from group economic activities.”

What Prof Bukenya presented that day would later turn out to become the core message of the Bonna Bagaggawale campaign and, today, a key plank of the revamped Naads programme.

During that meeting, however, the then executive director of Naads, Dr Silim Nahdy, put his neck on the line, opposing the plan to merge the two programmes. He would later speak out, saying politicians were trying to “hijack” Naads.

That stand would turn Dr Nahdy into a marked man. In an interview on February 23, 2009, shortly after coming under heavy criticism from Museveni and his cabinet, Dr Nahdy told this reporter that the constantly-changing goalposts were derailing their efforts.

“Our hands are tied,” he lamented. “The technocrats are required by law to follow the Naads Act but the politicians want us to take a different course altogether. This is slowing down our work.”

In October 2011, Dr Nahdy lost his job. He was replaced by Dr Samuel Mugasi. The official account was that Dr Nahdy’s contract had ended and it was not renewed. However, in an interview with The Observer on October 30, 2015, Dr Nahdy said he resigned out of frustration.

“I am a PhD holder in agriculture and I like using my brains. Full stop. I am a scientist. I work a lot on facts and figures. It’s difficult to exercise your brain [in a non-conducive environment],” he said.

Dr Nahdy, who had a short consultancy stint in Rwanda, now works as the executive director of the African Forum for Agricultural Advisory Services (AFAAS).

When the government launched Naads in 2001, it was heralded as the key catalyst to what some analysts described as “the most far-reaching agricultural extension reform in Africa.”

Initially, up to 80 per cent of the $108 million NAADS budget was funded by donors. These donors include the World Bank, Global Environment Facility, Danish International Development Agency (DANIDA), European Union and the International Fund for Agricultural Development.

On the other hand, the central government footed only eight per cent of the bill. Other contributors included; local governments, whose contribution stood at 10 per cent, and participating farmers who paid the remaining two per cent. Policy analyst Daniel Lukwago says Naads performed according to expectations in the early years due to harmony between its plans and execution, until short-term political expediency came in the way of long-term goals.

“The early success of the Naads can be attributed to the fact that there was no apparent contradiction between the political agenda and the technocratic agenda,” Lukwago notes in a 2010 study of the programme. “The un-harmonised expectations between technocrats and politicians dented the little success Naads registered in the beginning.”

Similar sentiments are held by some technocrats within government circles, at least going by the comments of the chairperson of the National Planning Authority, Wilberforce Kisamba-Mugerwa, on Naads.

While speaking to a stakeholders’ dialogue on extension policy direction in Uganda, Dr Kisamba-Mugerwa said the failure of Naads to achieve most of its objectives was largely the result of an own goal scored by government.

“Within the [first] 12 years of Naads implementation, the legislated policy (Naads Act 2001) was greatly altered through additive policies and through proclamations, which incorporated a heavy input supply component into Naads and this greatly reduced the extension and advisory role and component,” he explained. 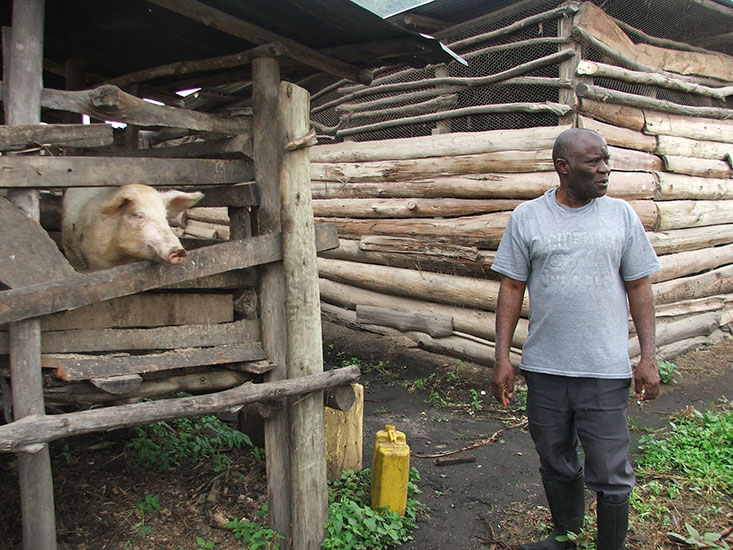 According to Kisamba-Mugerwa, the result of the ambiguous policy direction meant that “extension workers got diverted and embroiled in procurement processes, distribution of inputs and recovery, a role they were not meant for, and thus the beginning of a serious ‘role conflict’.”

The regular shifting of goalposts and lack of clear policy direction disappointed a number of donors, who shrunk their contributions and left the government to carry most of the financial burden.

By the second phase of the programme, financial tables had turned. The government was funding 73.7 per cent of the Naads budget, while its multilateral and bilateral partners had scaled down their contributions to just 25.3 per cent.

In early 2013, the World Bank voiced rare public criticism of a government project when its senior agricultural economist, Rashit Pertev, said Uganda needed to take a firm position on Naads rather than perpetuating suspense.

With donor scepticism growing, and their contribution whittling, the government was forced to extend the first phase of Naads for three years, to a decade – using the same money – as it looked for money to fund the next phase.

In the second and final part of this series, we look at the impact that this policy merry-go-round had on Uganda’s agriculture sector and how the government is currently trying to remedy the situation.

This special report is a product of The Watchdog, a centre for investigative journalism at The Observer. The investigation was undertaken with the help of a reporting grant from the African Centre for Media Excellence (ACME).