It could be true that Amama Mbabazi has a lot of money. It could also be a myth. What is clear is that this money-talk has won Mbabazi a lot of admirers, as EDRIS KIGGUNDU reports.

As the 2016 elections edge closer, there is general perception that Mbabazi has so much money accumulated over years of working at the top echelons of government, which gave him global and local business connections.

This perception has led a number of leading opposition politicians to associate with him, many with the hope that he will fuel their political campaigns. At his secretariat, Plot 29 Nakasero road, there is already an influx of people from various parts of the country asking for money to do one thing or another.

More recently, sources told us that two politicians attached to the Democratic Party sauntered into the offices armed with soft copy designs of Mbabazi’s posters, billboards and brochures, among other things.

“They requested Shs 200 million to complete the work, including printing,” said one source who works for Mbabazi.
The politicians tried to justify the budget, on the grounds that Mbabazi was “running out of time”.

Amama’s DP enthusiasts were commended for their innovativeness but told that the matter of posters had been handled by a foreign firm. Crestfallen, they made for the exit.

The closest Mbabazi has come to revealing the extent of his financial muscle was when he reportedly told a meeting of TDA members in September that he had reserved $7 million (approximately Shs 25.5 billion) for the campaigns.  Some observers believe Mbabazi has much more than this.

On July 4 when he featured on Capital Gang talk show, Mbabazi, responding to Beti Kamya’s question regarding the source of his money, said: “… I can tell you that we are absolutely ready to fund the campaign to the maximum.”

Henry Muguzi, the national coordinator of the Alliance for Election Campaign Finance Monitoring (ACFIM), an organisation that monitors the use of money during elections, told The Observer yesterday that reports about Mbabazi’s reported wealth, whether true or not, had helped boost his political fortunes.

“Politics in Uganda has been so commercialised and whenever people hear that someone has money, they run to them. I do not know how much Mbabazi has but I know he is not a poor man,” Muguzi said.

Various people interviewed for this story, including those working for Go Forward, Mbabazi’s political platform, could not estimate how deep Mbabazi’s pockets are.
Without evidence, some said they believe he has hundreds of billions of shillings for the campaigns. Some think his money could be tied in the services sector or in the local road construction business.

Our interviews have revealed that Mbabazi keeps tight and confidential control of his finances. Sources told us that decisions regarding financial expenditure at Team Mbabazi are taken by either him, his wife Jacqueline or daughter Nina. Hope Mwesigye, a sister-in-law, too plays some role.

While the actual size of Mbabazi’s purse cannot be ascertained financially, he is not your average run-of-the-mill politician. For more than two years, including when he served as prime minister, Mbabazi has been renting a large amount of office space 12th floor at Crested Towers for his private businesses. Our sources told us that for such a prime building, Mbabazi spends not less than $20,000 on rent per month (approximately Shs 73 million).

This translates into Shs 876 million per year. Mbabazi also reportedly bought the building that houses his secretariat office on Plot 29, Nakasero road for an undisclosed figure, suspected to be in billions.

We have also been told that Mbabazi spent at least Shs 300 million on the consultative meetings in the districts of Mbale, Kapchorwa, Soroti and Jinja. In June 2014, during celebrations to mark the Martyrs day at Namugongo, Dr Cyprian Kizito Lwanga, archbishop of Kampala, revealed that “Mbabazi and his friends” had contributed Shs 500 million towards the re-development of the shrine.

Sources in Mbabazi camp also told The Observer that the former prime minister has spent heavily in legal fees in cases that he or his supporters have brought up against the state.

Mbabazi’s team of lawyers includes Fred Muwema, John Mary Mugisha, Davis Akampurira and Severino Twinobusingye. We have been told that Mbabazi also spends at least Shs 15m each month to run activities of the NRM Poor Youth, a group that canvasses for him votes in slum areas of Kampala. 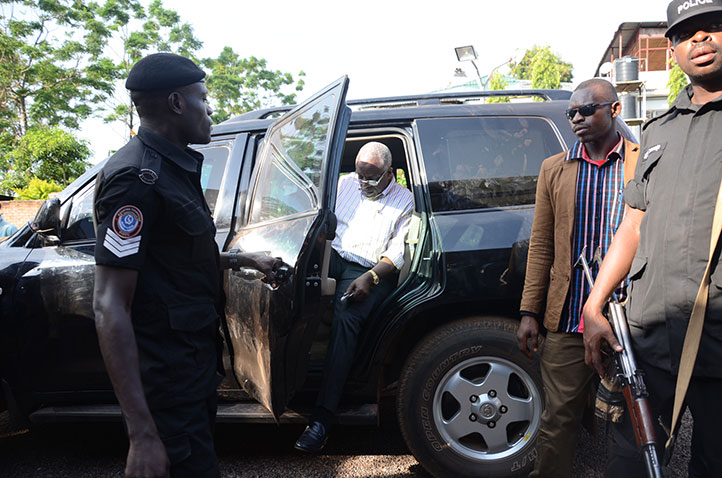 There are also reports that Mbabazi intends to support financially several candidates across the country at various electoral levels in the forthcoming elections. One aspiring MP told us that at least Shs 50 million is needed to fund the most modest of parliamentary campaigns. This figure could go higher depending the size and population of the constituency.

But Betty Nambooze, the Mukono municipality MP, said those talking of Mbabazi funding some politicians in the coming elections are spreading propaganda, designed by sections of the opposition and NRM.

“Some people want to portray those who support Mbabazi as if they are doing it [for] money. So, they come up with all these stories. Some of us have not even met Mbabazi physically or spoken to him on the phone,” Nambooze said.

A senior leader of Pressure for National Unity (PNU), which until recently was led by Prof Gilbert Bukenya, told The Observer yesterday that Mbabazi extended financial assistance to the party when it held its delegates conference in August at Katomi Kingdom hotel in Entebbe. Interviewed yesterday, Josephine Mayanja-Nkangi, the spokesperson of Team Mbabazi, told us yesterday that it was immaterial to dwell on Mbabazi’s money.

“Whether he has a lot of money or not, it is not illegal. He does not have more money than the state. What I can tell you is that he has enough money to fund the campaign,” Mayanja said.

In any case, Mayanja added, the country would know the source of Mbabazi’s money after he declares his election-related expenditure and income to the Electoral Commission.

The Political Parties and Organisations Act 2005 requires parties that take part in national elections to present audited accounts of the monies spent during the exercise 30 days after election day.

The law prescribes a Shs 1.4 million ($800) fine or three years’ imprisonment or both, upon conviction for non-declaration of funding sources within this period. Publically, the ruling party laughs at suggestions that Mbabazi has money. In a recent interview, party vice-chairman Mike Mukula said Mbabazi had only the “promise of money” that was, however, not seen.

But there are indications that the NRM government is not taking the money talk lightly.  In an intelligence report previously reported by The Observer, one spy sounded concerned about Mbabazi’s alleged financial activities. The report, addressed to Gen Salim Saleh, said that Jacqueline Mbabazi and Hope Mwesigye had the telephone contacts of NRM grassroots mobilisers in villages across Uganda, and had promised to send – or sent – them “mobile money”.