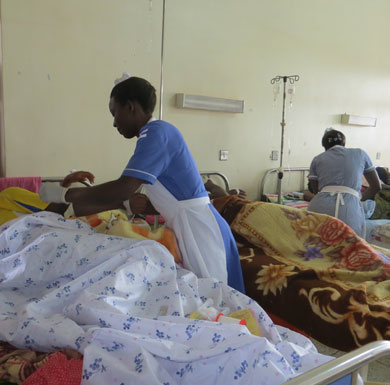 When one chief executive officer recently went down with high fever, he reported to a high-end clinic and was diagnosed with typhoid and immediately put on treatment.

But days later, as his condition worsened, he went to another clinic in Kololo, where a doctor looked him in the eye and declared: You do not have typhoid. As RACHEAL NINSIIMA writes, there are many false positives of typhoid.

In February this year, the ministry of Health and Kampala Capital City Authority (KCCA) announced an outbreak of typhoid in Kampala and neighboring districts of Mukono and Wakiso. By June, when the country was declared typhoid-free, 14,304 suspected cases of typhoid had been registered.

As a first step in exploring the outbreak, health investigators employed a specific case definition test, which includes laboratory confirmation of the disease. It was discovered that four among the 16 specimen tested were positive.

For the other majority, a sensitive case definition that uses only signs and symptoms of the disease was used for diagnosis. But one respected doctor in Kampala recently stated that many people in Kampala have been treated for typhoid yet they did not have the disease.

“Many health workers tend to wrongly diagnose typhoid because of using non-specific tests, that even if one had malaria or another type of bacteria, he or she would test positive for the antigen. This is a diagnosis of convenience,” says Dr Tumwine, the executive director for Uganda Pediatrics Association.

“Not everyone who has a fever has typhoid. The best way to diagnose typhoid is to look at the clinical signs and doing a blood culture. Results of blood cultures take days. So, be wary of someone who immediately diagnoses you with typhoid, having not taken off a large amount of blood previously.”

He further notes that typhoid may sometimes be diagnosed using a sample stool but it still has to be cultured. In many areas, typhoid fever is misdiagnosed as malaria, dengue or pneumonia due to non-specific clinical symptoms.

This type of test, according to Dr Tumwine, is used early in an outbreak investigation when investigators are trying to determine the magnitude of an outbreak and characterize persons at risk for the infection.

However, the disadvantage of this type of test is that signs and symptoms reported among patients might be consistent with typhoid fever but not unique to this disease. Diseases such as malaria and urinary tract infections share similar symptoms. Without laboratory confirmation, case counts can include persons with other diseases.

“Patients typically present after the onset of fever with influenza-like symptoms including chills, headache, malaise, anorexia, and nausea, but with few physical signs,” she said.

The challenge for health workers is that while these signs are necessary indicators of typhoid, they alone are not sufficient  for confirmation of the disease.

Typhoid, caused by Salmonella Typhi bacteria, is spread by ingestion of food or water contaminated with infected faeces. In Uganda’s recent outbreak, contaminated drinking water and juices were identified as the main source of infection. The most affected group was males between 20 and 39 years.

According to WHO, typhoid has a fatality rate of between 13 and 20 per cent if not effectively treated with antibiotics. Additionally, Dr Tumwine observes that even if one recovers from the disease, he or she can remain a carrier of the Salmonella Typhi, shed it in their faeces for months and spread it to others especially if one handles food.

“People should also ensure that the source of ice-cream water is safe, avoid food and beverages from street vendors and use pit latrines or toilets to ease oneself,” he cautions.