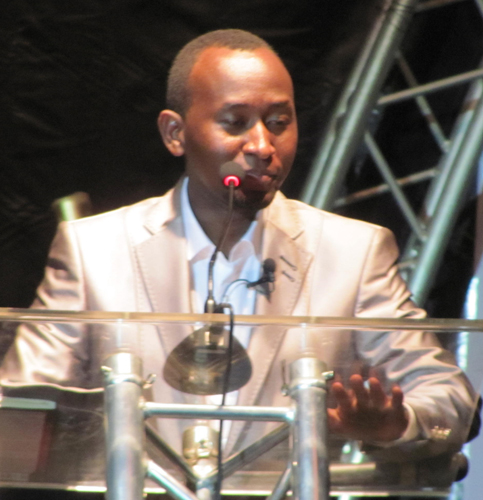 He would walk the streets of Kampala unnoticed.

Despite several spot-on prophecies, he is known to only a few, perhaps because he has no church he is attached to and prefers to keep a low profile.

Even while he has been born-again for fifteen years now, very few religious leaders would identify him. He only has a small fellowship called Zoe that meets every Tuesday at Open House, Buganda road.

Last Thursday, at a well-attended launch of his new book, Tasting the Powers of Age To Come at Serena hotel gardens, a good number of people rose to give testimonies on Mbonye’s prophetic ways. First was Dr Moses Musinguzi. Musinguzi narrated that Mbonye began his ministry a decade ago with a small family in Kamwokya.

“This family had problems and when Mbonye prayed for them and revealed the source of problem, it came to pass. Since then people always gathered in big numbers to listen to his prophetic counsel,” Musinguzi said.

With the growing numbers, a small fellowship was started at Hotel Triangle and has now moved to Open House. Dr Abed Bwanika, one of the pastors present, said he had always been thrilled by Mbonye’s teachings especially those in his latest book.

From this book, Bwanika notes that Christians can never manifest in God’s likeness unless they understand who they are. He also commended Mbonye’s prophetic work because the office of prophecy is privileged to only a few.

“Prophecy is one of the oldest ministries central in the Old and New Testament but has today been abused and misunderstood,” Bwanika said.

This year, Mbonye has asked people to keep an eye on future happenings in Uganda as a group of politicians, who he feared to name, will have the homosexual backing for political favour.

In terms of economic development and growth, he prophesied that there will be a cry from the Eastern nations and the western nations as we cross into 2013. He also cautioned that, it will be up to Ugandan leaders to know which nation to relate with. He mentioned that countries like Israel will be coming in with ideas especially for agriculture.

“I pray leaders recognize the spirit in the direction of agriculture as areas like Karamoja will benefit.”

He also prophesied that there will be a food shortage even in countries like USA and these will draw aid from Uganda. Mbonye advised that the oils and minerals we boast of today should be channelled to development of agriculture.

“If we are focused, Uganda will be an admirable nation like the Egypt of Joseph’s years”.

Earlier this year in January, Mbonye said Uganda was transitioning into a first-world country. The President echoed the same during the Jubilee celebrations in Kololo.

Past prophecies that have come to pass

While in his final year at university, Mbonye foretold the exact date of the 2004 Asian tsunami, December 26. Other prophecies he gave include the 2010 terrorist attacks at Kyadondo rugby club and Ethiopian village restaurant; he prophesied about these bombs in 2007.

He also prophesied about the Arab Spring that rocked the middle East and North Africa starting last year. He predicted the gay rights bill recently tabled before parliament, the re-election of George W. Bush as US president, the April 2007 Mabira riots, the increase of child sacrifice cases in Uganda, the public exposure of Pentecostal pastors and the resurgence of war in eastern DR Congo with thousands fleeing to Uganda for refuge.

During one of the prayer sessions at Open house, he foresaw floods affecting Ugandans and before we knew it, students in Katakwi almost failed to sit for their UCE because of the floods.

Members of his fellowship say he also prophesied Hillary Clinton’s recent visit to Uganda, the UPDF chopper crash enroute to Somalia and the ammunition uncovered at the Kenya-Uganda border.

Mbonye says there is no magic to his prophecy but the power of God enables him to see farther. Mbonye also advised believers to buy and read his book, Tasting the Power of the Age to Come, so as to be inspired.

This book contains experiences, testimonies and revelations on how believers can experience God’s supernatural power. The 35-year-old prophet was born in Jinja and became born-again in 1998, as an under graduate student at Makerere University. While there, he was so prayerful and always received visions in form of dreams.

“I never took these dreams lightly because whatever I dreamt [came to pass].”

“It is then that I realized I had a prophetic calling and that I would speak to the nations about God’s plans,” he said.