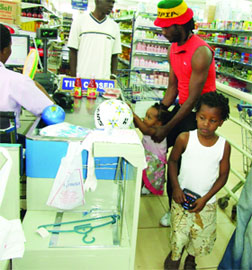 Singer Bebe Cool saw his children on Monday for the first time since December last year when his wife Zuena Kirema left him. And it was at this meeting that the estranged couple reached an agreement that Bebe would see Thierry Alpha, 7, and Beatta, 4, twice a week.
The singer who has just returned from a South Africa tour said he has not reunited with Zuena, although they are on good talking terms.

“We are still apart but with good signs of ending the loneliness. This was also the second time since December that we talked face to face unlike the previous days where communication was only by phone.
Maybe when people saw us talking they thought that we were back; no please, continue praying for me ‘omukazi akomewo’ (for the woman to come back,” Bebe told The Observer.

The Observer bumped into Bebe Cool at Ntinda Quality Supermarket buying toys for Alpha and Beatta.
“Dad are we going together to play football?” Alpha asked while Beatta cried for her father to carry her.

She wanted him to take her home to watch the kiddies’ show Teletubbies. At the supermarket, Bebe was in a jovial mood. He said he was happy to see them looking healthy and grown up.

“Alpha has grown very tall,” he said.
The Munene Munene singer is planning a concert on September 27 in Jinja where he will plead his innocence to his in-laws and the Busoga area to help him persuade their daughter back to marriage.

The glamour couple split last year amidst accusations of infidelity on Bebe’s part, resulting in the singer’s hit song, Agenze.
“I will not stop crying for her to come back because she is special to my life and I hope to leave Jinja with her. She is a woman who knows me better and I am the man who knows her. I am optimistic that by the end of the year we shall be together again,” he said.

Bebe is planning to do five Agenze shows at Lugazi, Mukono, Kampala and Entebbe, all dedicated to Zuena.
The Observer tried to talk to Zuena at her Ntinda home but she was not in. On phone, she said she may not be living with Bebe but that does not mean they are no longer friends; and since he is the father of her children he will remain her main man to the end.

“I am not talking to anyone about our affair, but just watch [this space],” Zuena said.
“I have learnt a big lesson and I know she has also learnt a big lesson during this period and we hope to use that experience to celebrate a golden jubilee in marriage,” said Bebe.

He said that people have turned him into a laughing stock with fellow musicians composing song after song on the issue, but he says that since most of them lead a similar life to his, there is no need for jubilation.

His nemeses Mowzey Radio, Weasel and Bobi Wine have songs that mock the sputtering marriage.
“That is why I have respect for Jose Chameleone and his wife Daniella as they have been behind me all this time. He has advised and comforted me unlike other people who pray every day that she doesn’t come back. But they will see us hand in hand one time,” said Bebe.