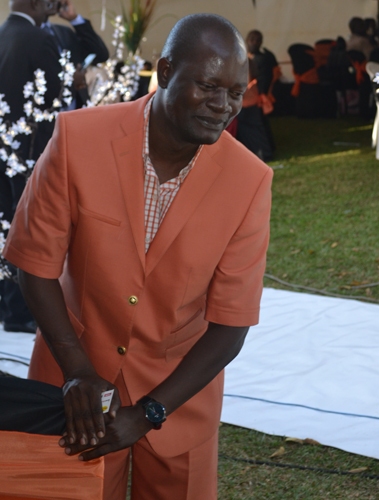 There was a front page picture about a fortnight ago of Congolese music maestro Koffi Olomide upon his arrival in Uganda for a charity concert. With the euphoria about his impending concert, tongues were wagging about his sense of style.

Of course Congolese men will generally pass for being very metrosexual, more so their musicians, and Olomide is the quintessential Congolese alpha musician if you please. And so, his sense of style is a bit of a trend setter for his peers. But his suit in that picture was not about to pass unnoticed.

We are not talking about your ordinary business suit; no, it is the single breast, two-button, double back-slit, slim-fit type that is currently trending. He was clad in a ‘remixed’ version of a Kaunda suit – call it a Safari suit. Anyone still remembers the Kaunda suit, that masterpiece for the dapper dressed man?

Made most popular by former Zambian president,  Kenneth Kaunda, and from whom it got its street name in Africa, the Kaunda suit, fondly called the safari suit elsewhere in the world, was the ‘it’ dressing for the man of class in the decades gone by.

I was in fact convinced this suit was the ingenious composition of Kenneth Kaunda, only to find out from research that the safari suit dates back to the colonial era – even to the 19th century, according to The Dictionary of Fashion History. It was, the dictionary says, ‘clothing created for cross-country expeditions’: a dun-coloured pair of trousers, with a half-sleeved shirt cut of the same cloth, sporting so many pockets that it resembles a jacket.

You flip over into those history books you will see images of its wearers topping it with a sola topee - a pith helmet that guarded against the sun. It was around 1970 that the safari suit made its foray into the elite African fashion scene for men. This meant politicians, bureaucrats, businessmen and their ilk had this as their preserve.

If you are above thirty, you will recall that your father too had one or a collection of them – some with trousers shaped like a bell, hence the moniker ‘bell-bottom.’ But as it is with fashion trends, the era of the Kaunda suit soon took a plummet, replaced by the Italian, British and American designed suits; double-breast to single- breast.

Today, it would be considered archaic to be seen in a Kaunda suit of old – unless after some modification as with Koffi Olomide’s. There have, indeed, been numerous modifications to the Kaunda suit as we knew it from the material then of synthetic fabrics like polyester to cotton blends that make today’s edition.

The lapel too has taken some modification so much so that Kaunda suits can now be worn with a necktie and shirt on the inside, which was previously unfathomable. So again, we see a cyclical return to the Kaunda suit, only this time with modifications, from design to fabric.

Today’s kaundas are classy outfits worn to parties and such rare occasions as opposed to then when they were the office wear of choice. So now, every self-respecting man is rushing to get one or a couple of these to wear to formal evening events, if the hustle of black-tie, bowtie and all such formality is one they want to avoid.

And like every garment, finding aptly matching accessories is what distinguishes a dapper dresser from an average one – again, look up Olomide’s picture and check out his bag, shoes, watch and sun glasses! Now it’s your turn to look hot in a Kaunda suit!