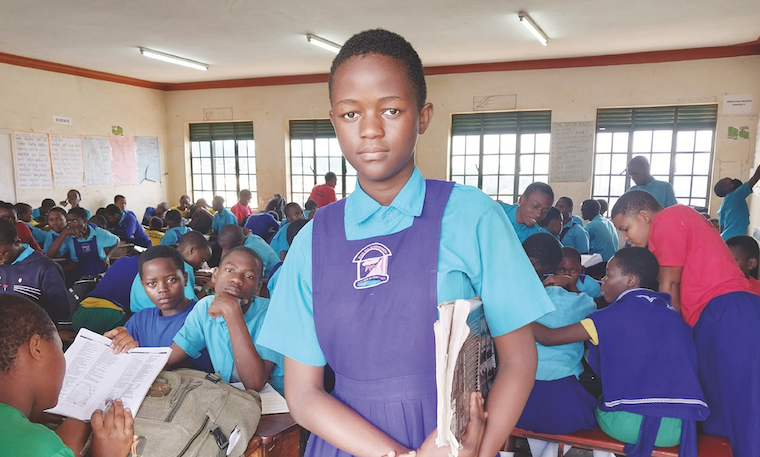 Jemimah Nakawala on the eve of her PLE briefing at KCCA primary school, Kamwokya

Youthful table tennis stars Parvin Nangonzi, 14, and Jemimah Nakawala, 12, look back on their time in Birmingham, England during the Commonwealth Games between July and August, with fondness.

They wish Uganda looked like that in terms of cleanliness and overall development of infrastructure, including the sporting one.

“When we reached the arena where we were to compete, it looked so beautiful; nothing of the kind here. The tennis tables on which we played looked so different and the opponents we faced were in a totally different league from us,” Nangonzi said.

Her close friend Nakawala added that playing at the Commonwealth exposed them to a different level of skill sets needed to succeed. But also, the speed, footwork and general technique were testament to the high-level training programme their opponents undergo.

That is in contrast to what Uganda offers Nangonzi and Nakawala, which is probably why they look back on their time in England with nostalgia.

Yet, it is not only the development and organization of the UK that left Nangonzi and Nakawala wishing that were their society.

The two girls sat for their Primary Leaving Examinations (PLE) last week, completing on November 9. However, the circumstances to getting ready for those exams have not been the most favourable for young athletes as them.

When Nangonzi and Nakawala returned from Birmingham, they had been out of school for several days. But Uganda notoriously lacks a system of compensation for time and lessons for learners that have to step out of class to fly the national flag at sporting events.

As a result, the sporting duo missed key lessons, important for pupils preparing for final exams. Even as they touched down at Entebbe to a warm welcome complete with a party in their honour at Nakasero primary school, where the two initially studied and did their table tennis practice, their classmates had really gone far in terms of classwork. Nangonzi and Nakawala had a lot of catching up to do.

Pre-mock exams had been done in their absence and the mocks were just a few days away. They headed into those exams hardly prepared for the challenge.

Their minds needed re-tuning after being away for a while. Although the duo did not win any medals at the games, it was a good experience for them playing at such level, facing off with seasoned athletes.

Nangonzi lost all her three games, for example, while Nakawala won one of her three in Birmingham. Still, their featuring in the tournament concretized their status as top seeds in women’s table tennis.

Representing your country at any level is no mean feat and fills almost everyone that achieves it with pride. For these youngsters, it was overwhelming as every pupil at school wanted to associate with them.

However, returning home, after all the festivities and ululations done in their honour subsided, a new dawn was ushered in; one that did not care how good they were at table tennis, because PLE was just around the corner.

For most children in Uganda, a future in this country is determined by how well they do their academic work, not their extracurricular abilities. Because of the way this society is arranged, one’s talent and skill is not rated highly to sustain them in life, as the case is in North America or Europe, which are more skill-oriented societies.

Instead, the more English, Science, Social Studies and Mathematics one knows, is considered to be of greater importance. Yet, for both Nangonzi and Nakawala, a choice between table tennis and Mathematics, would be obvious.

“Math is quite complex. Understanding the different concepts is difficult. One needs so much concentration and revision to get them,” Nangonzi said.

During their time away, Nakawala felt that catching up with math was the hardest, even with all the efforts their teachers were putting in to help them.

Even before Birmingham, the duo’s concentration in class had reduced, their overall revision before the games reduced, as they concentrated on training every evening. By the time they would get home in Nansana after 8pm, they were exhausted and all they could do was sleep as their classmates revised.

According to Nangonzi and Nakawala, representing the country and studying was proving to be a tough balancing act.

Nakawala said: “We started playing table tennis four years ago, because of how easy we found it. But we did not know at the start of it all that we would be representing the country. The realization, that this was a serious thing, caught us by surprise.”

So, stepping up training, doing road work and a lot of physicals, was such a novelty for the youngsters. Inevitably, it would take its toll on them, especially in a country like Uganda, where there are no timetables specifically set by the government, to accommodate the nurturing of young talented athletes.

For example, having an arrangement, where such young girls can break off from school, but then return and continue from where they left off with their classwork, and be able to catch up with the rest, is not provided for.

In the end, one of these girls’ key trade has got to suffer. In this case, their academics have been stretched. Incidentally, both players are not from your high-end families. Their parents are boda-boda riders, who despite the limitations they have, support their children’s dreams.

Prossy Najjuma, the mother to Nangonzi, runs a retail shop.

Najjuma said: “Life has been tough raising my children. Right now, I am a single mother. Her father was around until she returned from Birmingham. The breakdown of the government package (Shs 7m) given to every athlete who represented the country, appears to have angered him. So, he left us.”

But Najjuma noted that with table tennis in the picture now, it is the saving grace for Nangonzi, as it has proved to be for her elder sister, Justine Nakyeyune.

Nakyeyune won a scholarship that has sustained her in school up to where she is in S5. Najjuma is hoping Nangonzi can secure one too, after her primary education.

Academic scholarships are an item that former national table tennis star, Maria Musoke helps these young athletes secure. And Nangonzi is hoping she can get one, but she said registering a good second grade in the worst case scenario, will enable her get the much-coveted scholarship.

Najjuma would be relieved if a scholarship was secured. She said: “Because we wanted her to concentrate on her studies, and her father was not around to transport her to school in the third term, we decided that Nangonzi stays with her coach Musoke for easier access to school without much hustle.”

That said, the less hustle, would enable her stress less, allowing her to revise and comprehend her classwork better. Najjuma added that Nangonzi had to get special tutoring especially in mathematics, where she had major challenges.

“You cannot compare preparing for PLE to table tennis practice. Exams are tough. But I was determined to fight,” Nangonzi told The Observer.

In mocks, Nangonzi scored aggregate 28, a third grade, but she was not fazed by the marks, since she had little time to prepare, after returning from Birmingham. The same could be said of Nakawala, who scored aggregate 33, a fourth grade.

Her father, Daniel Magaya said her mocks results were a stark contrast from how well she performed previously. He is hoping that since she has been focusing on her studies more lately than the table tennis, she will perform better in PLE. However, Nakawala’s situation is a bit more complex; at the time of the first Covid-19 lockdown in March 2020, Nakawala was in P.5 at Nakasero primary school.

She had only studied the first term for six weeks. Little had been covered by then. And when school resumed in January 2022, which literally was two years of being at home, Nakawala’s father insisted that she should be taken straight to P.7!

Nakasero, strict as it is, could not accept that, because they felt a child without covering Primary Five and Primary Six, would struggle.

Magaya did not want to hear any of that; he chose to take his daughter to KCCA primary school in Kamwokya, instead. When I met Nakawala at her new school a week before her final exams, she looked tired and despondent about the prospect of doing PLE. On the face of it, she said, she was ready.

But on the other hand, Nakawala, who is hoping the 33 can turn into an aggregate seven, said: “Math is a big problem. And I think it is because I did not do Primary Six to understand the concepts. But I will do my best,” Nakawala said with a sad face, looking down.

Her father Magaya is a single father. He said that with all he has on his plate, it has been difficult for him to ensure that Nakawala excels on all fronts.

“The table tennis alone is hard work. But imagine, I have been transporting her from Nabweru to school over the last many years. And all her needs and those of her two siblings, have depended on my boda boda income.”

Unfortunately, Magaya recently lost his boda boda to loan sharks. That made it difficult for him and his children, to keep staying in Nabweru. He revealed that they relocated. For young athletes Nangonzi and Nakawala, the odds appear to be stacked against them for now.

But maybe as a country, better facilities to enroll young athletes, with more conducive flexible timetables, to enable children balance classwork and talent, would help; not only the children, but their parents too, to cope with the rigours.

0 #1 Kalemera 2022-11-20 19:01
Those results are atrocious. I went to school with people who represented their schools and country, at both primary and secondary, and all of them were first grades.

A good number were at the top of their classes. This speaks a lot to the decline of our education standards, and the efforts parents put in nowadays.
Report to administrator