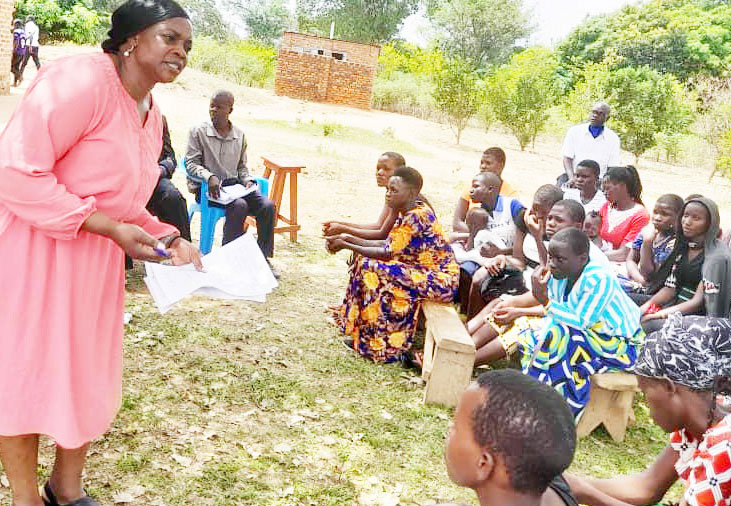 Mental health is not something new, but the rising number of people struggling with mental health-related issues, especially depression, has raised public debate in recent days.

The number of people, especially students, committing suicide is alarming. One woman who decided to do something about it is DIANA KIBUUKA NAKIRIGYA, who, having gone through severe depression, is helping people build their inner resilience, writes Ernest Jjingo.

Kibuuka lives to make life to look easy and bearable regardless of circumstances. To her, there is no amount of suffering that can break down one’s mental health. She believes everyone is capable of living a decent life regardless of the economic situation as long as they are in the proper shape of mind. She considers mental health as a tool to facilitate peoples’ productivity and lift communities out of poverty.

“I regularly come across stories about a broken mental health system that contributes to school drop-outs, job losses, homelessness and suicide in schools and communities. As someone with experience of mental health conditions, I take pride in helping anyone I come across to live a positive life,” she says.

She is particularly passionate about teenage mothers mostly because the story of her mother, Norah Nabulya, who was forced into marriage at the age 12. Recently, the ministry of Education and Sports partnered with her organisation, Action for Community Treatment Services (ACTS) Fund, to offer mental health and psychosocial support to learners across the country starting with the districts of Kampala, Kalangala, Wakiso, Mpigi, Gomba and Mukono.

ACTS Fund is a non-profit organization with innovative solutions to the mental health issues affecting young people in schools. ACTS Fund is currently mentoring staff in schools, equipping them with techniques of offering mental health and psychosocial support to the learners. As a mentor, coach, mental health advocate and professional nurse, Kibuuka is eager to open the minds of Ugandans about mental health.

“We are seeing a surge in suicide cases and my advice is that parents, caregivers, and peers should watch for any negative changes in how adolescents express themselves or how often they communicate. Concerned parents, teachers or caregivers can talk with health professionals and their children’s teachers, in case they have noticed any behavioural changes,” she says.

“It is also important to note that many risk factors associated with suicide are a result of mental health related issues or substance abuse problems or a family history of them. Others include negative life events; family history of suicide; familial abuse of any type; household domestic violence; impulsive behaviours; and exposure to others’ suicidal behaviours.”

So far, her organisation has trained more than 3,500 teachers, 435 teenage mothers as well as another 18,000 people via the organization’s helpline. “We have also developed tools to be used as coping skills for learners to build resilience,” she says.

The inspiration behind Kibuuka’s drive can be traced from her upbringing and life experiences as a native of Ssese Islands in Kalangala.

“I spent much of my life in Mukono but in 2014 when I visited Ssese, I saw children in Mwenda village who reminded me of me growing up. I saw children walking without shoes and girls full of smiles but dressed in dirty clothes but what touched me most were the stories I was told and the number of girls I saw walking around pregnant at an early age. They had been forced to get married, quitting school and some had run away from their homes,” she recalls.

“In some bizarre cases, I learnt that some parents had sold off their children to fishermen. Then there were the young men wasting lives by using drugs. I knew I had to do something.”

It was at this point that Kibuuka, a daughter of NRA war commander Henry Magoye, mooted the idea of forming a community-based organisation as a way of connecting with the young girls she had met. That experience facilitated the creation of ACTS Fund, a place where people would discuss mental health free of judgment and stigma.

“I wanted and I wished they could just return to school. From my experience, I remembered that it was school that saved my life,” she recalls.

Indeed, her upbringing had finely shaped her for a tough life. Growing up in a polygamous family of 40 siblings, she learned from the step-mother how to work in a farm.

“Me and my older sister worked at a sugarcane plantation to get money for our school fees. When our father died, I was forced to join what was called the needy students club at St Kalemba SS. I worked at the school farm but what I earned was not enough. The head teacher, Charles Kyasanku, topped up my fees until I finished Senior 6,” she recalls the hard times.

She would later join Makerere University on government sponsorship and did a bachelor’s degree of Arts in Economics and Business Administration. In 2002, she travelled to the USA and studied nursing, specializing in mental health. She is currently doing a master’s program to become a psychiatric nurse practitioner.

“In 2007, I got work at a specialized hospital for American veterans of war. I became very passionate about mental health in the process, dealing with people with substance abuse and working alongside doctors helping people with different mental illnesses,” she recalls.

All was well until late 2019 when the Covid-19 pandemic struck and she was one of the first victims.

“I was on a hospital bed for 10 days fighting Covid-19. I saw people die. I lost a brother, my best friend and I watched myself fighting for my life. I never knew I could go home to see my children again. I was alone in isolation, depressed and couldn’t breathe. I was given food through the window and I was unable to see my children,” she says. It was at this point I learned there is more to life than being healthy.

“I sat with patients dying without their loved ones, family members saying goodbyes to their loved ones via phone. I learned that what killed most people and those who went home was depression and anxiety. The fear that people were dealing with was unbearable. I myself was suffering from depression. Some days I struggled to get out of bed. I would feel so down that I would lose my appetite and sleep,” she says.

“I made a promise to God that if I could go back home to see my children again, I would seize the opportunity to have an impact on communities. I decided to travel throughout America taking care of people with Covid-19 in different hospitals. I made a lot of money and it is this money I used to open a rehabilitation center in Busabala, a Kampala suburb in late 2020.”

Kibuuka also expanded the ACTS Fund chain of shelters for teenage mothers under the name of Bright Star Girls Alliance, with branches in Kalangala, Kabale and Namutumba. She also authored a paper; How Covid-19 affects our mental health - the vine toolbox.

From her experience, the biggest challenge to her efforts is society’s limited access to mental healthcare due to unavailability of qualified clinician as well as the cultural stigma.

“There is need to have more open conversations to allow people to open up on how they are feeling and what they are going through without judgment. Mental health doesn’t discriminate. Depression affects even the very richest. I believe that if we had a variety of services and support, people with mental health concerns or psychiatric disabilities can thrive in their communities,” she says.

Among her most satisfying gestures is the return of several teenage mothers in Kalangala to school in 2020. “Their chance to feel hopeful and dream again improved their mental wellbeing. A number of them said they had lost faith to speak to someone who made them feel safe,” she says.

“Their family members continue to share their stories of hope and recovery. Unfortunately, many Ugandans are not aware of how common mental health challenges are and how to deal with them. I believe that if you want to build a generation, you start with the young people because they will always carry on.”

Kibuuka admits that she specifically targets the girl child because many African cultures reduce women to be good for marriage and having children.

“A woman is the most enduring gender. Kibuuka admits most of the funding for her projects is through fundraisings, donations and her family support.

“We hope one day ACTS fund will become a hospital group dedicated to care and treat mental illnesses. We hope to see mental health become stigma free where those who are struggling can freely ask and accept help, recover and live normal life to fully function at their jobs,” she says.

In the USA where Kibuuka is based, she runs an organisation called The Sky Limit Solution, which she uses for mentorship, training speakers and coaches on storytelling. On a personal note, Kibuuka is married to Daniel Kibuuka and the couple has been blessed with four children.