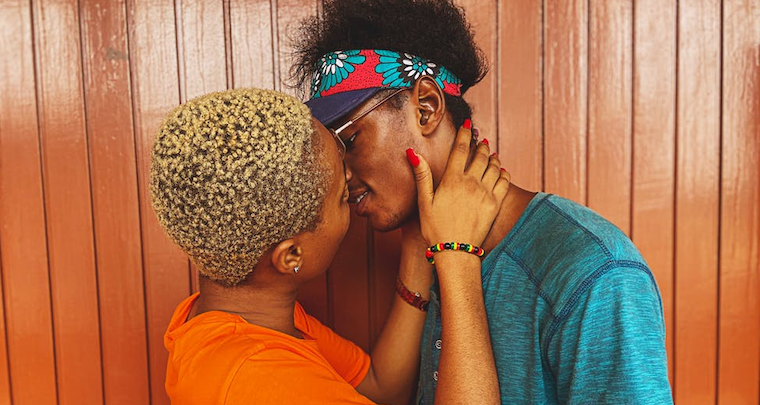 The evening with Kenneth started off pretty much the way most of our past meetings had gone, with me cooking, us having dinner, then hanging out in the living room talking about anything and everything.

However, this time, there was something different; electricity in the air that literally sizzled and chemistry between us that could not be ignored.

Not that I had not felt an attraction to him before; while I had initially had nothing but platonic feelings for Kenneth, I could not deny that of late I had begun to see him in a more intimate, sexual way.

However, in my commitment to David, I had resisted and buried those feelings, and until this evening I had been successful in my determination to ignore them. But tonight they were stronger, louder and more persistent, and I did not know if I still had the strength to fight them – or if I even really wanted to.

Whatever was in the air tonight, Kenneth clearly felt it too, and furthermore, seemed to sense the crack in my defenses, for when he finally made his move and leaned in towards me on the couch, he did so with the confidence of a man who knew he would not be turned away.

Our lips had barely touched when we were interrupted by Junior waking up and crying out for me. While Kenneth groaned in frustration, I jumped to my feet like I had been burned and dashed to the bedroom.

A smart woman would have viewed the interruption as fate intervening and stopping her from making a huge mistake, but I was not listening to fate any more than I was listening to my mind that night; so, instead of barricading myself in the room and rebuilding the barriers I had until now kept up between Kenneth and myself, I soothed Junior back to sleep, then returned to the living room.

The night went better than I could have hoped for and the next morning I woke up snuggled up close against David’s chest.

He had been a skilled and passionate lover, and by the time the night was over, I had lost count of the number of times he had made me lose control. It felt great having the spark back in our marriage and I just hoped that the passion of the previous night was not just the effect of this romantic break, but the marker of a renewed chapter in our marriage.

Many assume that women just want a husband who will provide generously for her and the children for the rest of their lives, while men apparently look for a wife that can cook, clean, give birth, raise well-behaved children and provide amazing sex on demand. But I knew that when it came to marital needs, there was not a ‘one size fits all’.

I could not speak for David, but while money and security were important to me, I had always had those and believed I always would, with or without David.

I wanted more; I wanted intimacy, quiet companionship, and the wild passion of the previous night, and I wanted it all the time, not just on a weekend away. David stirred and I looked up to find him watching me, a soft smile on his face.

“I didn’t know you were awake!” I exclaimed in surprise.
“I was enjoying just looking at you – you’re beautiful,” he answered quietly, making me shy with his compliment.
“You’re not too bad yourself,” I answered with a shy smile, then pecked him lightly before reluctantly detaching myself from him and climbing out of bed. “Since this is our last day here, I think we should try to see as many of the main spots as we can; why don’t you go get the kids up while I have a quick shower?”

Diane and I shared one of the best nights we had had in a long time that night; the changes in her personality had clearly extended to her lovemaking as she was softer, more receptive, more willing to relinquish control, and the result was an explosive night that neither one of us wanted to end.

In fact, so memorable was the night that not only did I resume it the following morning, but I also surprised Diane and myself by deciding to stay an extra day.

I was known as a workaholic, and could not remember the last time I had missed a day in the office for anything other than the most serious of situations, and certainly never for an impulsive long weekend of relaxation and romance.

Part of the reason for my sudden change in plan was simply the practicality of it; Diane had pointed out that it would be a waste to come to Jinja and not take the children to the source of the Nile, or explore all the other attractions and activities the town had to offer, and I did not fancy the idea of driving back to Kampala in the dark after a long day of touring.

However, the truth was that during this weekend, I had discovered a side of my wife that I wanted to continue to explore, and a part of me was afraid that once we returned to the real world, that side of her might once again disappear before I got the chance to experience more of it – so we stayed an extra day.

We started off with a visit to the source of the Nile, where we had lunch, then moved on to the rapids, before heading to the Sailing Club for an early dinner and a sunset cruise.

It was already dark by the time we returned to the vacation house. The children, even more exhausted than they had been the previous night, had fallen asleep on the drive back and only woke up for the minute it took to move from the car to their beds, before blacking out again.

Just like we had the previous evening, Diane and I went out to the balcony and after we had sat in companionable silence for a few seconds, she reached out and laid a hand on my thigh.

“Thank you so much for this weekend; it meant a lot to me,” she said sincerely.

I looked her in the eye and answered, “It meant a lot to me too.”

She could never guess just how true those words were.