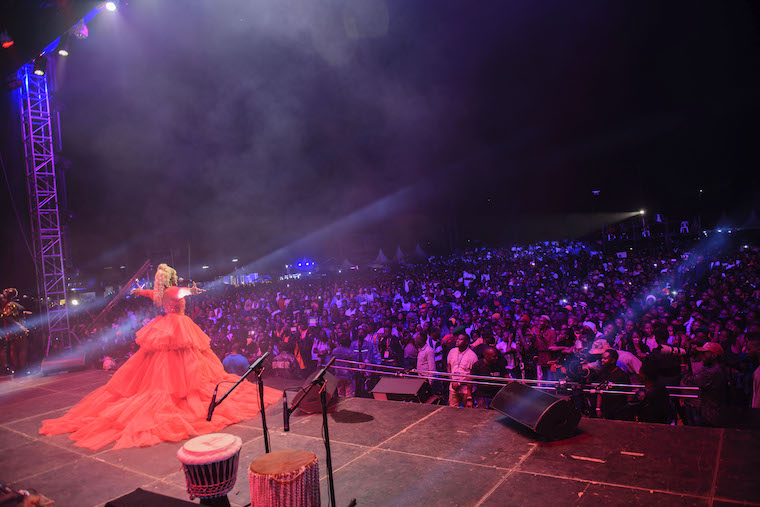 It was a show that will evoke memories for years to come. Nwagi is one of the talented musicians, who has earned herself fame with her seductive, borderline rude attitude and a great body that have earned her fans and harsh critics alike.

Since her first hit single Musawo in 2016, Nwagi’s concert has been long overdue and finally her label, Swangz Avenue, organized the hugely successful Fire Baby Concert on September 9 at Lugogo Cricket Oval.

The concert saw people come in as early as 3 pm on a chilly Friday evening following a heavy downpour, which triggered heavy traffic in different parts of town.

And when Nwagi finally came on stage, there was no stopping the crowd from grooving to her beats. She kicked off her first session with songs including Gwenonya, Oli Kirabo, Embeera, which evoked memories for her longtime fans. She continued to sing live with the crowd singing along, which was amazing to behold.

Nwagi paused to pay homage to the late Mowzey Radio as she performed Kibulamu, which the fallen artiste penned. She also paid tribute to Danz Kumapeesa, her former producer, who died in 2017.

During her second session, the singer performed some of her well-known hits such as Kano Kozze, Lukoba, and Kwata Essimu with Free Boy. She continued with Amaaso remix featuring The Mith, Vinka, and Feffe Bussi.

The attendance was massive – we had not seen the cricket oval that packed before – and Nwagi, indeed brought her A-game with energy and stage presence.

The level of organization exhibited by organizers Swangz Avenue and KT Promotions was commendable, until the hiccups in sound and lighting became too irritating.

The microphones kept going off, something that frustrated both artiste and her audience. In the end, however, Nwagi had a good show, despite the security hiccups caused by goons that flooded the grounds.