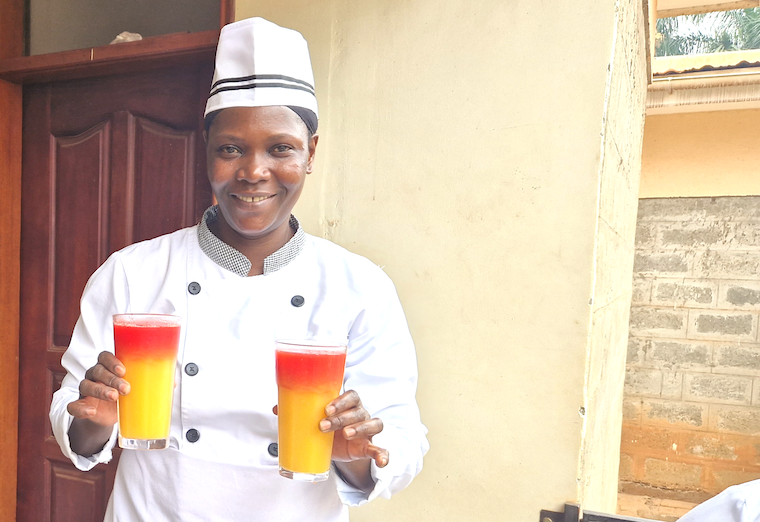 Like her towering and charismatic presence, chief chef Hadijah Namutebi’s foods have an alluring elegance and positive arrogance about them.

Namutebi had joined as an intern in 1994. In the culinary world, salads demand the highest hygienic practices and standards given that they are made from fruits and vegetables that are quite susceptible to contamination.

Little wonder that she takes the greatest pride in having presidential meals on her rich cooking CV, which spans across Sheraton hotel, Prestige Hotel suites, New Court View hotel in Masindi, and now The Harp Hamilton Park in Kira, Wakiso district.

Except for the Sheraton where she rose through the ranks to supervisor over a 10-year period, at other chef jobs, she has just been ‘snatched’ away – of course with better pay offers.

It is a dream come true for the girl whose future seemed bleak when she lost her dad when she was in P3, and could not even afford to pay for P4 and so got catapulted to P5 by an uncle who took over the school fees duties.

“I was a small girl who was studying in a very good school and then suddenly my dad died. My uncle took over because I was at least bright. I did not even study P4, I went to P5 because there was no tuition. I went to P5 and performed very well, I was among the best 10,” she says.

From Mbale’s Nakaloke primary school, she went to Kashasha secondary school, where she did both her O and A-levels before joining YMCA Wandegeya for a hotel management and institutional catering course. She says she has always wanted to be a chef despite not being inspired by anyone, but dreamed of working for the biggest hotels in the country.

After YMCA, she applied for an internship placement at Sheraton, Serena and Munyonyo Commonwealth Resort. Serena did not respond to her application but Sheraton and Munyonyo called her. She had to make a choice. She chose Sheraton where she met chef Winnie Dhaka, whom she says offered her tough love.

“When you have someone who babysits you, you can’t achieve. But when you have this someone who is on you and very strict, you can achieve a lot. I achieved and I am so happy with my profession and mentor, chef Winnie,” she says.

It was a Greek salad made of mixed vegetables, black olives and feta cheese. Although perhaps, for security reasons, she made the salad in the full presence of Clinton’s travelling chef and security, she says they trusted her and let her do her thing all the way because “they saw that I knew what I was doing”.

“I felt so good [at making the president’s salad]. Chef Winnie just said, ‘you’re going to make a salad for the [US] president’. I said ‘wow’ because I was the [chef ] supervisor. I made the salad and after they had taken the salad, the message came back. It was amazing. After that, I got a certificate of appreciation from [Bill Clinton].”

Was the task overwhelming? A bit. But with her self-confidence and belief, she just took it as a challenge.

“When a person tells you that make this person’s best [meal], you also have to show that you can make the best. You have to show this person that they will still get the best from you,” says the mother-of-four, whose children have not even the slightest interest in cooking.

If making Clinton’s salad was overwhelming, Zimbabwe president Robert Mugabe’s was even more onerous. Firstly, Mugabe for those who were close to him, say he had a taste for class and finesse – even in old age. He demanded the finest of everything.

And when it to came to food, he reportedly preferred cold food due to his ill health. At Sheraton where he was a presidential guest, Mugabe designed his own salad.

“For him, he had a specific salad, it had no name, for sure. But because he had a list of items he wanted in his salad, I made what he wanted perfectly.

“He wrote; I want this, I want this...I want this in my salad. After mixing all that and making a dressing, the salad went and he was so happy. He said, ‘This is great and it is what I expected’,” Namutebi recalls with pride.

How did she know Mugabe was happy? Mugabe communicated with the senior hotel management. Mugabe’s compliments never came cheap, but he was happy.

“I made for him a nice dressing. You see, when you make a nice dressing, that is when your service is wowing. But when you just make the salad and season and leave it there....”

At the Harp, Namutebi seeks feedback from every guest who has been served her food.

“Getting feedback is very vital; when you serve something, you must always look for feedback, and if you don’t work on your feedback, then you are gone. It is through that feedback that you get to [improve] on what you have made,” she says.

She dreads the lack of what she calls ‘actual’ culinary schools in the country and says little wonder that the biggest hotels are run by foreigners. If there were culinary schools in Uganda, there would be no need to hire Kenyan chefs. For what? But the reason why Ugandans are ‘undermined’ in the hospitality business in the region is because of lack the practical skills, she says.