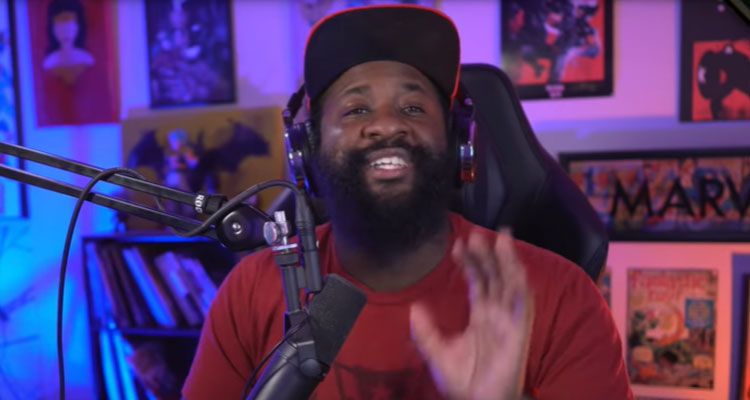 Eric July is causing all kinds of chaos online, and yet, many of you have possibly never even heard of him.

But if you have a passing interest in comic books, you have probably spent the last two weeks discussing this man. I know Eric primarily as a YouTuber. But the man identifies as a rapper and political activist.

Eric is a Texas native with a colorful childhood. The YouTuber was charged with assault and battery, expelled from high school, and shot in the knee. It took a drive-by shooting to force him out of the gang lifestyle that had defined his existence for years.

Eric went to college, pursued communication and economics, and poured his heart into music, eventually forming the rap metal band ‘Fire from the gods.’ How is any of this connected to comic books? Be patient.

Eric was a dedicated member of the Democratic Party, who supported and campaigned for Barack Obama. However, by the time Obama left office, the YouTuber had become disillusioned with the Democrats. He criticized Obama and accused his fellow African-Americans of turning a blind eye to Obama’s inadequacies because of his African-American ancestry.

Now Eric July has become a passionate libertarian. He manifests that passion by attacking the left- leaning political elements that litter pop culture. The content creator is especially critical of American comic books, blaming the industry’s plummeting fortunes on the forced diversity push that drives the creative minds behind giants like DC and Marvel.

Eric has contrasted America’s flailing comic book industry with manga sales, which have continued to climb over the years because Japanese authors and artists prioritize quality storytelling over social justice and virtual signaling.

Now, I have mixed opinions about Eric. I feel like he has fallen into his own trap. He spends every waking hour of his life dissecting American politics and the role it plays in entertainment. Naturally, most of the videos he makes are saturated with political discourse.

He looks at every movie, TV show, video game, and comic book through a political lens. Ben Shapiro has the same problem, which is why his content is hit or miss for me. For instance, his discussion with Neil deGrasse Tyson was legitimately engaging.

On the other hand, his review of Squid Game was insufferable because he turned every plot thread into a political attack. Anyway, back to Eric. The YouTuber has argued for years that readers would reward America’s comic book industry if they went back to the basics, abandoning their poorly disguised ‘wokeness’ in favour of high-quality storytelling.

But rather than standing on his soapbox and simply preaching to the masses, Eric took action by launching RIPPAVERSE COMICS, a comic book company dedicated to telling stories devoid of unnecessary political distractions.

However, the backlash against his success has been swift, with Reddit moderators banning all mention of RIPPAVERSE from comic book threads. The hostility comes, not from white people opposed to his message but from other black people.

They have dubbed Eric a traitor for his anti-SJW rants, many of which have targeted Obama, Black Lives Matter and Hollywood projects that elevate black voices.

Interestingly, these attacks have only served to increase Eric’s visibility. Isom#1 was launched days ago. If this backlash continues, there’s no telling how much money Eric will rake in within the next few weeks.

You could argue that Eric’s haters are simply responding to his political rhetoric and are not necessarily opposed to his success. I don’t believe that.