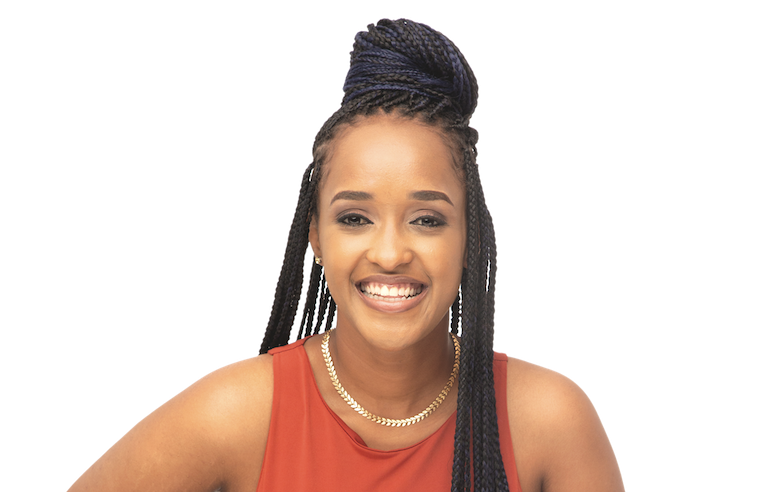 Faiza Fabz, 26, is a radio show host now working with 93.3 KFM. Quick Talk caught up with her.

Could you briefly tell Quick Talk about Faiza Fabz?

I am Faiza Salima. Many people know me as Faiza Fabz, both on social media and on air. I was born on March 20, 1996 to Salim Saleh Ahmed [eh, eh, my lord…Quick Talk starts, but Faiza laughs and says, “not the Salim Saleh of majje”] and Rashida Awal.

I am the sixth in a family of seven children. I am a Ugandan, though of Arab descent. I am a media personality, baker and events host. I went to Main Street primary school, Jinja, PMM Girls in Jinja for O-level, and St Kizito SS, Bugolobi for A-level.

I later joined Kampala International University for a degree in Mass Communication. I am also a product of the Media Challenge Initiative mentorship program.

How was life growing up?

Although I was born in Bugolobi, I grew up with our extended family in Jinja [there is something about Jinja and Ugandans of Arab origin!] I grew up with my aunt and uncle in Jinja. I hardly spent any time with my parents in Bugolobi, apart from the holidays.

Growing up in an extended family meant that you disappeared into the crowd and your voice was feeble. But it gave me a whole life experience. I chose to keep quiet most times… I then fell in love with storytelling through writing. Writing became my way of [being] heard.

When did you start working?

I started writing when I was 16 years old. I contributed to the school and community magazine and during my holidays, I worked with Buzz from my senior four under the public relations department, to date. By the time I was 18, I had begun making some good money.

With Buzz, I interacted with several media personalities. My love for storytelling pushed me into appreciating the role played by media. I wanted to tell stories and I wanted the audience to appreciate these stories. This was augmented by my love for reading all types of literature.

Did your parents welcome your choice of profession?

They did not. It is just recently that they got a change of heart, having seen the fruits of my work. My family is very religious and traditional. They looked at media as a platform that would spoil their daughter or put her in harm’s way.

I was rebellious in taking on this profession. My father [RIP] wanted me to become a lawyer. My mother…she just wanted to see me happy.

You were introduced to money early; how did you pull it off?

I like taking care of myself. My parents could have done it but I felt that I should take a load off their shoulders. Paying my tuition was one of the ways I put my money to good use.

I wanted them to realize that I was putting the money to good use. It [however] scared them when I was at campus and decided to move out.

How do you deal with criticism that borders on hate?

I take everything carefully. I always felt I had a tough skin, but when some people attack me, it sometimes gets to me. It is something I am still trying to understand. I often don’t engage people who criticize me. I try to find the silver lining in their criticism, but some are just bad vibes.

How do you manage the social expectations?

Some standards are set by the media, but also by other people we associate with. I think I am a typical muntu wa wansi [commoner]. I have kept it real. I don’t portray a life that I am not. I have realized that if you try to portray a life that you are not, it becomes hard to keep up.

My friends have told me I should be in a car by now… I use boda boda that I can manage. That is how I managed to get the deal with Safe Boda. I simply stayed real to myself.

Are the friends and family also asking for a gentleman?

[Laughs] From interactions, I have learnt that people immediately assume you are seeing someone. I am single, and not dating. I got out of a relationship a year back and I haven’t got into another since then because I am not the type that dates for fun.

I like to date and give my love, attention, affection, and my whole self to someone. I don’t have the time and energy to hop from one person to another.

What are your qualities for Mr. Right, though?

My ideal man is someone with a good personality, because I can not stand boring people. I recently went out with someone boring. He was talking about his money, businesses, and always on phone with his work associates: very boring!

He had a dull personality. I want someone with a stable financial situation because at least mine is stable [well, there was that boring gentleman, duh…!]

He should be very ambitious and self-motivated, because I am the kind. As a bonus, he should be a very good cook, because I come from a family where everyone cooks. Cooking is a must. [There you go, all ye financially-stable, not-boring great cooks; shoot your shot!]

You are on a morning show; how do you make it?

I am not a morning person. I envy people that are awake by 4am. I can sleep at 9pm and I shall still struggle to get up at 5am. I have an alarm that snoozes thrice. But I still have to wake up and hit the grind, because this is what I live for. When I get the opportunity of sleeping, I take it up.

We are picked up by the company car every morning and I then hop onto a Safe Boda on my way back.

Away from KFM, which other media houses have you worked for?

I worked with Urban TV and XFM for three years until a month ago when I joined KFM. I also worked for Magic 1 HD under UBC. I have also worked with Kunta Productions as a project coordinator [impressive resumé for a 26-year-old].

What has contributed to your fast rise in the industry?

Luck plays a major factor in how you get to where you are going. I met Joseph Beyanga [Head of Radio at Nation Media Group] when I was at the Media Challenge Initiative media hub and I made a good impression.

The work you put in is what will cement your place in whatever area you will be in. [Plus,] I have unimaginable faith in myself. I have a violent fear of failure. I also like a good lifestyle. I love living a life I have chosen for myself, not one that I settled for.

It played a huge role in my life. Since MCI teaches modern journalism, it has helped me find my way around media, because I never start from scratch. The fact that they have introduced us to modern journalism has helped us to keep up with modern trends.

Any good authors you could recommend?

Jane Austen and Chinua Achebe. I am interested in African literature because Achebe and [Wole] Soyinka wanted to tell African stories from the African eye. I respect that because their deliberate decision to tell our stories has inspired generations of admirers of African literature. I am also a great admirer of Afro-pop music.

How do you define life?

I believe that you should do your part and leave the rest in the hands of God.

How do you bag these endorsement deals?

I am very vocal online and my good numbers online have contributed to these deals coming my way. I am signed up to Safe Boda, Tusker Cider and MTN Pulse.

I influence a lifestyle that I have also taken. Although I am not always in bars, I drink. That is why I influence a product that I consume.

0 #1 Odongkara Bidong 2022-06-16 07:12
Come up to Gulu, I’m here Mr Right who perfectly meets your type. Reply through the Observer
Report to administrator